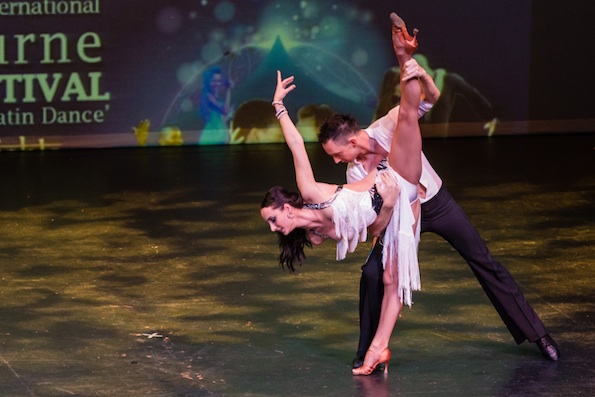 Mitch Bilic and Ellicia McDonald recently took out the competition at the World Latin Championships in Hong Kong to become the World Bachata Champions of 2013. The pair add this crown to an already impressive list of achievements as the current Australian Salsa Champions and New Zealand Dancesport Latin Champions for Salsa and Bachata.

Mitch and Ellicia, congratulations on your success at the World Latin Championships. You won the title for Bachata – can you tell us a bit about the Bachata style?

Ellicia
Bachata is a Street Latin style originally from the Dominican Republic. Street Latin is a bit different than ballroom Latin. In contrast to something like Salsa, which is very showy, very fast, and all about spins and showmanship, Bachata is a more sensual style. I guess you could say it’s more contemporary. It’s a lot slower; it’s a lot more about maturity and body movement, rather than being showy.

What is the typical path to becoming a Latin dancer and how do you both fit into that?

Mitch
Most Latin dancers don’t begin to dance until they are older in life, unless they are brought up with it in their culture. I began dancing with a company called ‘Keane Kids’, who taught me dancing, acting and singing in my youth, and then I got into Latin dancing years after. 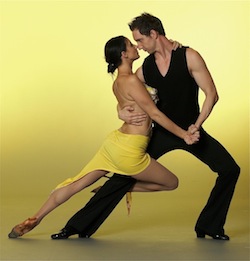 However, things have begun to change over recent years, as there is more of a demand on Latin dancers to have some form of fundamental training in dance. As the scene has developed from more of a social to a competitive scene, there has emerged a greater emphasis on lines, technique and acrobatic lifts and tricks. [This] increases the demand for dancers who have some fundamental training, whether it be in ballet, jazz, gymnastics or acrobatics.

Ellicia
I have the advantage of coming from a very trained background, so I have been able to move up in the scene pretty fast. I had a girlfriend at the time who was doing Salsa and one day she asked me to come into class with her and I thought, “Oh why not, you know, something different to try.” So I did a class and fell in love with it.

Normally three or four years is not a long time to get anywhere, but because I was trained in other styles it helped me get the knack quickly. If you’d had no other prior training, you’d probably spend about 8 to 10 years to try and get to where I am now.

What do you love most about Latin dance?

Mitch
For me Latin dance is all about connection, flavor, feeling and the music. When I’m dancing with Ellicia and especially dancing Bachata, I’m able to connect with her on a level that doesn’t even exist in the normal world. All that matters is Ellicia and the music, and everything else just fades away. I guess that’s what differentiates Latin dancing from other styles — you get to share that moment with someone on the dance floor. You let someone into your world and connect with them like you could never imagine possible and then find yourself lost in that moment.

How has winning the World Title for Bachata affected your career?

Mitch
It feels quite surreal to have won actually, after all the hard work, sweat and tears along the way. It’s a great feeling.

We’ve gained a lot more recognition throughout the Latin scene and industry since our win, and it has led to us being invited to many more events and festivals around the world to showcase and teach to others what we love to do… dance. 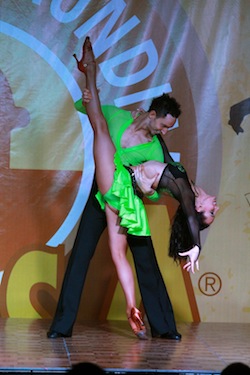 Ellicia
It has put us on the international scale. We started sort of delving into work overseas at the end of last year and this has given us that extra kick we needed. People are seeing us and realising, “Wow, an Australian couple has won this title.”

How did you train for the World Latin Championships?

Ellicia
We actually left it a little bit late this time, but we had trained for other things and other shows throughout the year. Normally there would be two components to a competition, choreography and freestyle. In freestyle you don’t know what the song is going to be and you just have to follow your partner. So it’s about musicality and adapting to the feel of the song. It’s also about knowing your partner, for instance, agreeing beforehand that a particular eight-bar sequence will lead into a trick, so that when your partner does a particular move you know a particular lift is coming.

We were doing around 25 hours per week for the championship around our teaching schedule. We trained about four weeks before that competition, which did not involve freestyle. Normally you would have about three months to train for something like that. We simply had to make-up the hours. We would be in the studio until 12 or 1 o’clock.

Both of you emphasise the importance of knowing each other as dancers. What makes a good partnership in your opinion?

Mitch
There are so many things I believe make a good partnership, but I think the key things you need are respect, trust, connection and compromise. We always value each other’s opinions and are always open to learning from each other. There isn’t anything that I wouldn’t do for Ellicia on the dance floor or off.

I also believe what makes our partnership so strong is that we understand each other’s boundaries and know how we can challenge them in a way to get the very best out of our dancing.

Ellicia
A lot of trust, number one. There are lots of tricks that we have to do, so trust is important. It takes time to get to know each other, but now we can throw things together easily. We have lots of fights in the studio [laughs] but that’s mainly around choreography and things like that. 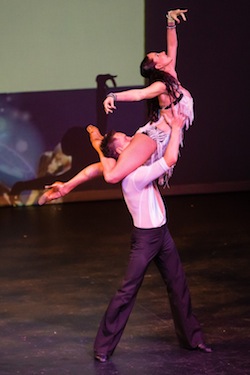 What is the most challenging aspect of working as a Latin dancer?

Mitch
As a career, I’d have to say it’s the sacrifices you make along the way. The life of a dancer is not a typical, normal life. It’s always late nights, either teaching, rehearsing or doing shows; then aiming to maintain a healthy lifestyle and stay in the best shape possible all year round, especially when traveling and being thrown out of your regular routine.

Not getting to see family and friends as much as I would like sometimes is tough too, but I guess these are the sacrifices we make to do the things we love.

Ellicia
Dancing with someone else is a huge responsibility too. We did a very big competition in Puerto Rico last year and I was the most nervous I had ever been in my life. The only reason I got up was simply because of Mitch. Had I not had him there with me, I probably would have pulled out. You’ve got to think about somebody else – it’s a partnership.

In terms of the art of dancing, the hardest part for me as a female dancer was learning to give up control. Latin dancing is all about being led for a female. Especially when you freestyle, which is a very big part of Street Latin, you don’t actually know how he’s going to lead you – it’s completely up to the guy.

A lot of the things that I was used to from my ballet training I had to let go of in order to just be ‘free’.

If you could speak to your younger self and give only one piece of advice, what would it be?

Mitch
Take chances in life and follow your dreams.

Ellicia
I see a lot of dancers make the mistake of not getting out there and taking opportunities because they think there’s something else around the corner that’s going to be better for them. I was never that person. I’m really glad that I got into the Latin, because had I said no to it because I was so focused on the other stuff I would have missed out on this opportunity. This has really given me a lot of work and a lot of status too.

I think probably the hardest thing now that I’m older, being the age that I am, is that I missed the whole era of acrobatics training. For one of our routines, we’re doing a backflip show move and I had to learn the fundamentals of a backflip in the first place because I didn’t have that training — my era was all about the ballet. So I guess I would say it’s really important to stay up with the times and just push for every opportunity.

To learn more about Mitch and Ellicia and get updates on their progress, you can visit their website www.mitchandellicia.com and their fan page at Facebook.com/MitchandEllicia.

All photos courtesy of Mitch Bilic and Ellicia McDonald.