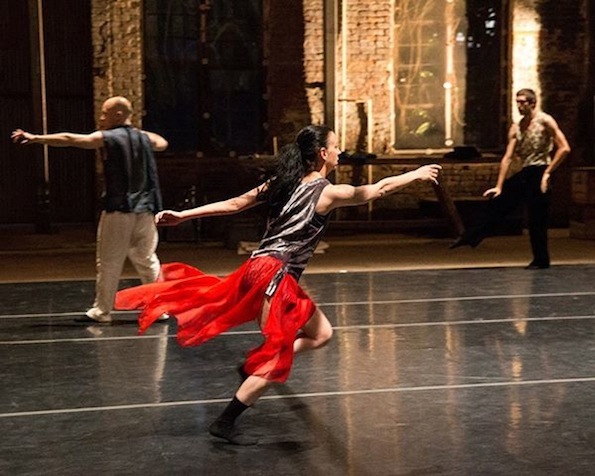 CORE Performance Company presented the world premiere of The Liberated Accident May 9-11 to conclude the inaugural season of Tanz Farm, a yearlong performance anthology produced by gloATL and the Goat Farm Arts Center. After working only three weeks with contemporary choreographer Amanda K. Miller-Fasshauer, CORE presented the new three-part, one-hour work that was delightfully intimate, free flowing and thought provoking.

Set in the gorgeous, old brick factory ruins of the Goat Farm’s Goodson Yard, the work was heavily influenced by its environment, often utilizing the space’s openness to break into a run or to interact with its natural noise, which includes passing trains less than 50 yards away. Miller-Fasshauer, formerly the choreographer-in-residence at Ballet Frankfurt under William Forsythe and the founder of Germany’s Pretty Ugly Dance Company, made the spatial decision to set the audience in-the –round, or on all sides of the dancers’ stage, providing unique, varied experiences for all.

With both pre-set and improvisational movement sections, The Liberated Accident went back and forth between structured choreography and dance “adlibbing”. This happenchance attitude appropriately paralleled the organic, evolving nature of the environment, which in itself has gone through various evolutions and uses over the last 100 years. Built during the 1880s and once used as a cotton gin factory, the space has also been used as a mill, an antique mall, a sheet metal factory, an artist’s haven and even as a factory to produce ammunition and mortar during World War II. (The current name, Goat Farm Arts Center, was derived from previous owner Robert Haywood who brought in goats to eat kudzu that was threatening his garden in the early 1970s.) 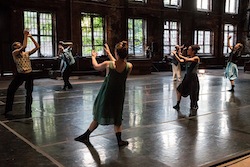 CORE Performance Company in ‘The Liberated Accident’ for Tanz Farm at The Goat Farm Arts Center. Photo by John Ramspott.

With a peaceful mood and informal elegance, CORE’s dancers pleasantly embraced Miller-Fasshauer’s contemporary style, known for focusing more on the philosophy of a work’s progress than the final, aesthetic outcome. With open hearts and minds, it was evident that all dancers revered her style and wanted to produce an accessible and warm performance.

The first part of the work opened with dances set to Bach’s Diverse Canons that were courtly, loosely patterned and inwardly meditative. Dancers exchanged curious interactions, glancing at each other in the midst of solos, exchanging timid smiles and brief, guarded smiles. Occasionally, dancers would engage in a pas de deux, but barely touch, with their ligaments wrapping around one another in hungry, but restrained intensity.

This habit of dancing together with little to no physical touch made me envision an invisible barrier keeping the dancers apart. This idea developed as the work progressed and I often wondered what the invisible force field was to them – or perhaps better put, what exactly filled that negative, empty space? Did they all see something there that the audience was blind to?

Miller-Fasshauer’s movement was at times fragmented and mysteriously inverted, bringing an ensemble phrase here and then a seemingly random gesture and shout there. As lush, grounded solos emerged and then vanished as swiftly, audience members’ faces sometimes seemed to be reflecting an inner confusion. Still, there was a transparency and vulnerability that came from the dancers that was lovely to witness. 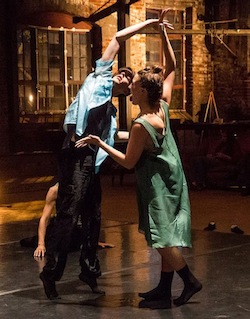 CORE Performance Company in ‘The Liberated Accident’ as part of Tanz Farm at The Goat Farm Arts Center. Photo by John Ramspott.

Perhaps the oddest section of the work was the second part, a highly-improvised pas de deux between dancer Erik Thurmond and Miller-Fasshauer herself. Thurmond read Parable of the Equal Hearts while Miller-Fasshauer constantly interrupted to verbally ask questions and then physically respond in dance phrases filled with childlike inquisition. This section dragged on and with Miller-Fasshauer’s quiet voice, many questions were lost on the audience as they were drowned out in the warehouse’s big space.

Finally, the third part took on a darker, more serious nature as the entire company began to dance once more. By this time the sun had fully set and the brick building’s dusty glass windows shined aglow with flicking tealight candles. A theme of reaching and being pulled returned from the first dance segment and responded beautifully to the music by Fred Frith, titled The Happy End Problem.

As a train began to pull up behind the warehouse the dancers fled the stage to wave to it, pressing their faces against the windowpanes. This happened twice before the dance whined down. To end the evening, the artists sat in a circle in the center of the space and tapped their hands rhythmically on the floor as the lights faded.

Throughout the evening two dancers stood out, Stephanie Boettle and Anna Bracewell. Both performed with great focus and detailed intensity, diving into deep lunges, unhurried spirals and grounded turns. While contemporary dance can be impersonal and extremely abstract, they brought emotion and refreshing sentiment.

In all, this unhurried, serene and deeply complex work was fleeting but rich. It was an intimate performance that adequately allowed viewers to witness and take part in an artistic, ephemeral process.