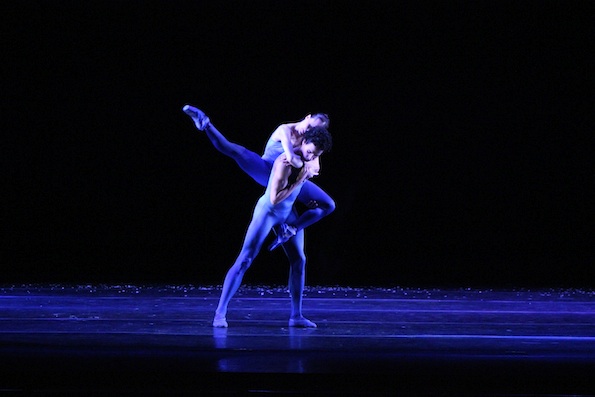 On Good Friday, miles away from its home theater, the Colorado Ballet branched out of its usual repertoire of big, classical ballets and abstract neoclassical works to showcase a very different side of the company. In the more intimate ambiance of the University of Denver’s Robert and Judi Newman Center for the Performing Arts, the company presented Light/The Holocaust & Humanity Project, a masterfully crafted work by Austin Ballet Artistic Director Stephen Mills, which portrayed the horrific events that occurred in Europe during World War II.

It can be difficult to find the words to describe such an event, so Mills took to movement and demonstrated his ability to not only tell a story with dance, but also to illustrate poignant themes without playing into the cliché or expected. The sectional ballet of five movements ran in its entirety without an intermission and was a tale of humanity, tragedy and ultimately, survival.

Tying each movement together was a dialogue, so to speak, between a 19-year-old girl [danced exceptionally by Soloist Caitlin Valentine-Ellis], whose life was permanently altered by tragedy, and the woman she became as a result [Ballet Mistress Lorita Travaglia]. It was a loosely structured through-line, interspersed with dynamic metaphors about the evolution and resilience of humanity. The story gave the audience something to grasp onto and the artistic instinct of Mills to not overdevelop it worked well.

The ballet began with Valentine-Ellis onstage crouched by a glowing orb of light; she appeared scared, unsure. Shortly after, Travaglia entered. At first her presence was frightening to Valentine-Ellis, but she embraced her younger self and helped guide her off into the wings, setting the somber tone for the evening. 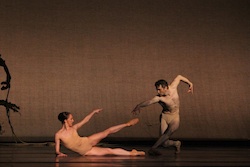 Section I opened on the Tree of Life, a common motif in Judaic traditions, and the origins of humanity, Adam and Eve. Through dance and minimalistic sets, Mills constructed a metaphor of humanity’s progression from the original man and woman to burgeoning civilizations with rituals, cultures and families. Clad in nothing more than nude leotards and dance shoes, Soloists Jesse Marks and Dana Benton performed a sensual pas de deux with intricate partnering and angular movements.

The allegorical section was heightened by titillating Hebraic music from Steve Reich (Teheillim), lighting design from Tony Tucci, and peppered with moments of the ensemble appearing in a cannon of movement vocabulary that was likely inspired by traditional dances. The section continued to build until the entire ensemble was onstage, dressed in pedestrian attire appropriate for the time period. They were experiencing a joyous event, a wedding, until they felt their universe shift; their bodies rippled in response to an unknown force, one that would change their lives irrevocably.

Shifting in Section II, Segregation and Marginalization, the joy dissipated to confusion and eventually fear. Accosted for their differences, the ensemble wove in and out of transparent panels of fabric that hovered a foot or so from the stage floor. There was a sense of uncertainty in each step: what was happening and why was it happening? They started to strip their clothes, and as their clothes fell to the floor so did their dignity.

In Section III, Humanity as property/Control through terror, the movement was less about balletic form and more about a lack of autonomy. Stripped of both their clothes and individuality, the dancers changed levels often and used each other’s bodies to construct machine-like entities—almost as if they represented the very trains used to mass transport Jews like cattle. The effect, coupled with the integration of multimedia images of train tracks, was haunting and mesmerizing. 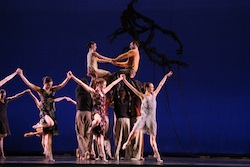 Section IV, Coping inside the box, was perhaps the most riveting. The dancers, wearing nothing but nude undergarments, circled the stage. One at a time, they entered and exited the center of the circle, symbolic of entering and exiting the circle of life alone. There were moments of openly expressed compassion tinged with the animalistic instincts that often come out of desperation for survival. Every dancer catapulted him or herself into each movement with abandonment, yet also exercised admirable amounts of control. There was a moment in which each dancer stood in parallel and lowered down to his or her haunches while remaining on demi-pointe—its simplicity was powerful.

The final section, titled Survival, represented hope in humanity. Couples in blue unitards swept across the stage to Philip Glass’s hypnotic Tirol Concerto. The movement was stunning, highlighting Mills’s choreographic abilities with pointe and male/female partnerships. However, it seemed a bit disparate from the rest of the ballet; it could almost have been a ballet on its own. Even more perplexing was the reappearance of Valentine-Ellis, now in pointe shoes, with her beau to dance a brief pas de deux. This concept of hope and the desire to survive might have seemed more relevant to the piece as a whole if it had been integrated into the previous section.

Upon its hopeful conclusion, the audience was invited to stay for a talkback with Mills and several of the dancers – affirming the ballet world is interested in engaging its audience in its work and creative process. Though, whether people chose to stay or leave, it was evident the evening had sparked something powerful and emotional in its viewers. With superb dancing and emotional depth, Light... showed Colorado Ballet at its best. Additionally, it further solidified Denver’s place in the dance world, proving the Colorado city is a forging place for advancement in the arts.