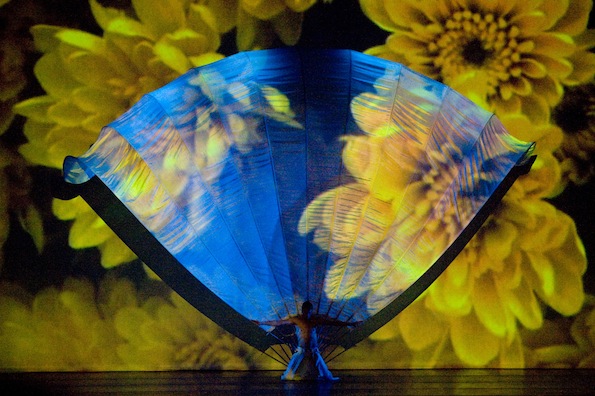 While visually stunning and filled with possibility, I found that Momix’s Botanica was unfortunately little more, during its one-night-only performance at Ferst Center for the Arts. Despite creative prop-usage and the gorgeous integration of colors and light, Botanica entertains, but lacks depth.

Momix, a company of “dancer-illusionists” founded in 1980 by Artistic Director Moses Pendleton, is well known for its imaginative sets and multimedia integration. Pendleton, a choreographer still clearly inspired by his experiences as a founding member of Pilobolus, conceived, directed and first presented Botanica a few years ago to mixed reviews.

Clearly not heeding the negative or critical nature of the initial reports, which often stated the show was “fidgety,” Botanica has not changed a lot since. The 90-minute production is part circus and part dance (reminiscent of one of Cirque de Soleil’s heavier dance productions) and is a journey through Earth’s four seasons.

Made up of at least 20 sections of projected imagery and props, Botanica is more about the pretty picture than the content or dancing. Thematically shallow and jumpy in its focus, you find yourself more wrapped up in the “how” the illusions and shapes are being made than the “why.” This is engaging and impressive for the first half but becomes more mundane and predictable as the show continues.

One section where this is perfectly exhibited is where dancers suddenly partner up to act like centaurs. This scene is odd and awkward. One dancer remains standing upright while their partner laterally bends forward and wraps their arms around the back of their partner’s waist – creating the illusion of a person with four horse-like legs. 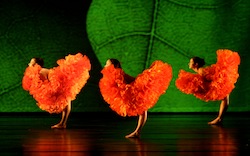 Momix performs ‘Botanica’. Photo by Max Pucciariello, courtesy of Momix and Ferst Center for the Arts.

While the dancers in front prance with mighty airs around the stage, their partners try to hold on and prance in time. The vague plotline between the centaurs strutting on stage seems to allude to males and females of the pack picking their mates. Admittedly the idea is original (it was definitely my first dance production with centaurs), but the question left after the fun and games is, “What did that have to do with Earth’s four seasons?” Or perhaps better yet – “Is that even dance or just an abstract version of physical theater?”

Still there are many sections in which various “cool” and “random” ideas come together beautifully. The beginning scene is one such instance. In this vignette white rolls of fabric billow across a dimly lit stage as dancers stand up underneath them and press their faces or hands into them, creating forms against an otherwise blank canvas. The image, set in the winter season, suggests life ebbing and flowing underneath a thick layer of snow, or in more in-depth psychological scrutiny, humanity straining against the toils of nature.

In another scene, I enjoy watching a woman twirling in a circular-contraption of beaded strands. Mesmerizing and somewhat hypnotic, she spins first in one spot grounded in the floor and then about the stage, jumping and in the process flinging the beaded strings up and down in waves.

One initially intriguing moment of the show is when a dancer comes riding out on a triceratops skeleton – something you don’t see every day! In the context of the show, I think that the dinosaur represents how nature has ridden the process of evolution throughout history. Yet, just when this prop and its possible meanings begin to unfold, the skeleton kills its rider and leaves stage. How immensely disappointing when so much more could be expanded on!

Amongst the rest of the neat and graphically striking images in the performance is a section of glow-in-the-dark, disembodied limbs, which gathered and linked together create shapes in the darkness; blooming marigolds, poking their innocent faces and legs out of big, fluffy orange skirts; a scene in which a female dancer in white is accompanied by strobe lights to create bolts of lighting up the back screen; yellow feathered fans used to create sunflowers; and a lone male dancer who tilts a giant, almost 30-foot-tall tail back and forth with various projections to the sound of ocean’s waves hitting the shore.

All of these short scenes end in a final, prop-based vignette of an autumnal gathering. Using tree limbs speckled with golden leaves, dancers lean and weave throughout one another. But still, in the end it is nothing but a pretty picture.

In some ways and for some viewers, the pretty pictures presented by Momix in Botanica are probably appealing and even nice. But for those arts enthusiasts who look to dance to leave something lasting, something more than a colorful and lively image, the performance is severely lacking.

Perhaps the biggest disappointment of all is that after the 90-minute performance viewers still have no idea what these dancers can really do. While clearly strong, technically proficient in prop studies and partner work, their individual strengths in pure movement are still a complete mystery.