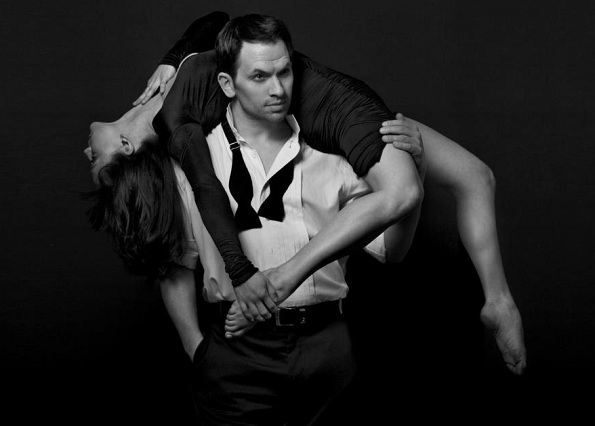 Everything that director-choreographer Mark Stuart embodies seems to have a commonality: extremeness. The now Executive/Artistic Director of his own New York City-based company, Mark Stuart Dance Theatre (MSDT), he went from never having studied dance to learning, from social dance to choreographing a production of the Broadway musical Swing!, even to forming his own dance company, which recently had the most successfully funded dance project on Kickstarter at 258% funded.

“I am a choreographer with no official dance training,” Stuart said. “It seems crazy, but it’s true. Everyone thought I was crazy to pursue this career and especially to have my own company. Thankfully, I’ve never been good at listening to people.”

His company, known for its extreme, athletic and almost dangerous partnering, is now working on its latest show, Standard Time. The company is also putting together a five-year anniversary gala for 2013 and is working on getting a season at the Joyce for next year. 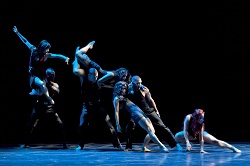 Perhaps most remarkable about Stuart’s success as a choreographer and dance company director is his lack of dance training. Stuart never studied dance formally and only learned to swing dance by going out and social dancing every night. The first time he had any exposure to any kind of technique was on tour with the Broadway show, Swing!.

“Our first day of rehearsal, they taught a ballet barre for warm-up, and that was the first time I ever tried to do a plié or tendu,” Stuart recalled. “Thankfully, the girl behind me at the barre, who would later become a founding member of MSDT, was really friendly and kept whispering in my ear what each term meant so I wouldn’t be completely lost. It was hysterical!”

“The success of each production slowly gave me the confidence that I could one day have my own company,” Stuart said.

After continuing on this musical theater path for a few years, Stuart began to want more. He began to grow increasingly frustrated that not enough of the dancers could do the extreme partnering he envisioned. So, Stuart decided he wanted to seek out a group of classically trained dancers whom he could shape into a company of his own, one that would be unlike any other in the dance scene. Several months later, Stuart was dancing in a movie with 70 other dancers from ballet companies, music videos and Broadway. 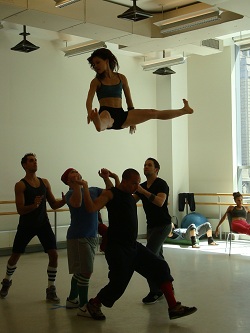 “All of a sudden,” Stuart said, “I could see those people in my company and envision the final product. I started talking to a few of them about the company, and before we had even started rehearsing we had been invited to perform at a festival. Crazy!”

Now, the dancers from MSDT come from a variety of dance backgrounds and specialties. Since most of them are doing Broadway shows, television and movies, there is often a different cast for every show, and often those dancers aren’t even in the same room until show day. MSDT rarely holds auditions. Instead, Stuart tends to hire someone he either knows personally or knows of through the grapevine.

“We do extremely athletic and sometimes dangerous work, often with very little rehearsal, so it’s really important to have people who I can trust to take care of each other in any situation, no matter how crazy it gets,” Stuart said. “One of my mottos is, ‘No matter what happens, you catch the girl.'”

MSDT fuses his thrilling partnering with all different styles of dance, but beyond just movement, Stuart strives to use this fusion to tell “visceral” stories, to make people really think.

“I’ve never believed in dancing just to dance,” Stuart said. “I’ve always believed that dance should be about something, and that it has the power to portray those situations in life that words just don’t seem to do justice to. I think that dance can spark something in people and make them take a look at things a bit more objectively.”

MSDT’s latest work, Standard Time, is a prime example of Stuart using dance to depict a greater picture. For Stuart, the piece arose from a lifetime of not understanding why people can’t just get along.

“No matter what is happening in the world, we are constantly fighting,” he said, “Standard Time is my way of asking people to think twice about the way we treat each other.”

The 90-minute dance theater piece features 14 dancers, four singers and a live orchestra. It centers around three pairs of lovers in three different time periods, with each era providing the “standards” and dance styles that were popular at that time. The couples are observed by mystical Timekeepers who control time and ensure that they learn to withstand their love beyond any conflict and to live in peace.

Without any prior experience to the various online fundraising programs, Stuart decided to launch a Kickstarter campaign to raise funds for the production. He set out to raise $12,000 in 30 days but ended up raising $31,000!

“The response was really incredible,” Stuart said. “None of us saw it coming, but everyone really got behind the idea of Standard Time and what we were doing.”

Standard Time remains to be MSDT’s immediate focus. The project is a large one, and most of Stuart’s previous work was actually built to be placed in a bigger show like Standard Time, although he says he didn’t know it at the time. All of his work seems to have a similar premise: to make people think differently about the way they treat each other. Most of the work that MSDT does is fairly serious, but Stuart admits that rehearsals with his company are anything but.

“If you ever walk into an MSDT rehearsal, you’d have a hard time believing that anything ever gets done or that these people could ever be serious,” Stuart said. “We have a bunch of clowns in our company, and there’s probably more laughter than actual dancing.”

Stuart admits there are struggles. So much time and energy is spent on the business aspects of the company and less on the actual work, and with today’s economy, keeping a company resilient and relevant can be a daunting task. But Stuart loves the challenge and remains to be passionate about his group and all they have to say.

“There are too many people who don’t pursue their dreams because they don’t think they have the skills, strength or knowledge to achieve them,” Stuart said. “Anything is possible if you just believe in it and never give up.”

For more information on MSDT and the company’s upcoming projects, including Standard Time, head to www.markstuartdancetheatre.org