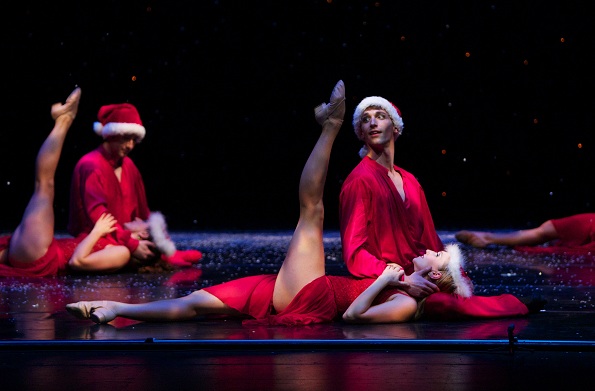 The holiday season is typically filled with family, friends, music, goodies, traditions and joy. This year, why not add to the list a Christmas-themed dance production? Here, Dance Informa has compiled a list of dance performances of nearly every genre that will be sure to heighten your holiday glow. Enjoy!

With the inaugural year of A Ho Ho Holiday Show, choreographer and producer Emily Bufferd wanted a chance to do some good via dance in a manner in which everyone, dancers and non-dancers alike, could enjoy.

“I think almost everyone can relate to the joy that a song like ‘Jingle Bells’ is meant to exude,” Bufferd said. So, she created this evening of ten choreographers’ work that she calls a “lighthearted, fun…holiday dance shenanigan”, which will benefit Toys for Tots. Admission will be $5, plus the donation of a toy.

“I really am hoping it will prove successful in bringing a lot of toys,” Bufferd said. “Toys for Tots is an organization that can never have too many items sent their way. I think a holiday show is a wonderfully entertaining way to get deeper into the spirit of the season.”

A Ho Ho Holiday Show will be presented at the Salvatore Capezio Theater at Peridance in New York City, on Saturday, December 8, with shows at 8:30 and 9:30pm. For more information, check out http://emilybufferd.com/Emily_Bufferd.html.

The stage version of Irving Berlin’s timeless White Christmas opened on Broadway in 2008, but this year will mark the musical’s first appearance in San Diego. San Diego Musical Theatre, led by Erin and Gary Lewis, will offer San Diego audiences their musical adaptation of the timeless classic, which will feature 17 Berlin songs.

The story follows Bob Wallace and Phil Davis, who have a successful song-and-dance act after World War II and who follow a duo of singing sisters en route to their Christmas show at a Vermont lodge. The production includes many well-known standards and of course the holiday favorite, “White Christmas.” San Diego Musical Theatre’s version features a 22-piece orchestra on stage, extravagant costumes and lots of singing and dancing.

“Berlin’s White Christmas is an uplifting, heartwarming production,” said Executive Director Erin Lewis. “Especially at holiday time, people want to see something familiar, something to help them get into the holiday spirit and bring their family to. White Christmas will definitely fit the bill!”

The performances are at the Birch North Park Theatre and run from December 13 to 23. For tickets and more information, visit www.sdmt.org.

Perhaps one of the most well-known Christmas dance traditions is the Radio City Christmas Spectacular, which features over 140 performers (including the always pristine Rockettes), extraordinary sets and costumes and an original musical score.

Inna Bayer and her youth ballet company, Bayer Ballet Company, in Mountain View, California, will present A Winter Fairy Tale, a holiday ballet set to music by Tchaikovsky and Rimsky-Korsakov. The story is a Russian New Year’s Eve fairy tale about a Bat Queen who kidnaps a little bunny and interrupts the forest creatures’ wintertime celebration. The ballet continues to follow the Magician and a beautiful Rose Maiden, who journey to return the bunny to its family.

Bayer launched Bayer Ballet Company in 2010 to give performance opportunities to her pre-professional students. This year, A Winter Fairy Tale can be seen at the Mountain View Center for the Performing Arts from December 14 through 16. For more, check out www.bayerballetacademy.com/winterShow.htm. 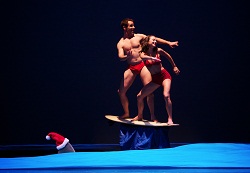 This year, California’s Smuin Ballet will bring back The Christmas Ballet, a ballet in two acts – Classical Christmas and Cool Christmas – that has an array of ballet, tap, swing and world dances, reflecting the company’s signature blend of classical and pop styles.

“Our founder, Michael Smuin, sought to branch out from the traditional and create an original holiday program that could change to reflect new work and his dancers’ strengths,” said Celia Fushille, artistic and executive director of Smuin Ballet. “We’ve continued our tradition of breaking tradition, changing the content and running order every year.”

Smuin Ballet will take The Christmas Ballet on the road in California’s Bay Area throughout December, with stops in Livermore, Mountain View, Carmel and San Francisco. For more information and for tickets, visit http://smuinballet.org

Mary Anthony, a modern dance pioneer who celebrated her 96th birthday in November, will present her Mary Anthony Dance Theatre in a work to celebrate the holiday season. The work, Ceremony of Carols, which first premiered in 1971, is set to the music of Benjamin Britten and retells the nativity scene. Also on the program will be works by Daniel Maloney and Ellen Robbins.

This year, performances of Ceremony of Carols will be held on December 15 and 16 at the Mary Anthony Dance Studio in New York City. For ticket reservations, call 212-674-8191 or email maryanthonydance@yahoo.com.

A Magical Christmas is an evening of dinner and performance that combines magic, comedy for the whole family, music and dance in celebration of the Christmas holiday. Illusionist Curt Miller leads the show, as Christmas narratives are told through his magic and also well-known holiday songs.

A Magical Christmas runs from December 14 to 16 and 20 to 27 at the Moody Gardens Convention Center in the Houston area of Texas. Tickets include not only the one-hour show and a holiday buffet dinner but also admission to the Moody Gardens Festival of Lights, the area’s largest holiday lighting event. For more information, visit www.moodychristmasshow.com.