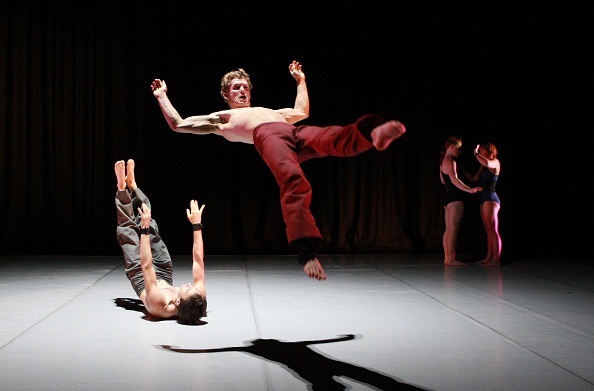 New York City Center was packed last Saturday, bustling with anticipation for the lively, jam-packed program to come. As the final performance of Fall for Dance’s 12-evening run, spirits were high and the dancing did not disappoint.

Opening the program was New York’s Shen Wei Dance Arts with Rite of Spring, a powerful and physically intricate exploration of Stravinsky’s famous score. The piece included 17 dancers who swirled, twisted, and leaped through the space with striking bodily control. Their movements initiated in one part of the body and sequentially moved to another, like water running through a curving pipe.

Shen Wei created an expansive visual landscape that corresponded with the sophisticated musical backdrop. Even though it grew repetitive after a time, it was a joy to watch the dancers’ movements layer over one another in relation to the multi-layered strains of the music. All was highly structured, carefully placed, and artfully done.

Second on the program was No Comment, the signature piece from Laboratory Dance Project, a 9-member, all-male troupe from Korea.  Using highly physical and acrobatic movement with clear roots in both martial arts and hip hop, these testosterone-pumping men showed the audience what they were made of.

Repetition, again, was a key element to the piece as they stomped the ground, hit their chests, and generally thrashed about the space. At times the piece veered off into a talent showcase instead of concert dance, but the sheer energy and physical capacity of these men kept this writer entertained to the very end.

Following intermission was Circa, performed by the Australian company of the same name.  The piece began with the startling image of a woman in spiky red heels standing atop a bare-chested man. She continued to traverse her way across his body, making sure to dig her heels into his hands, his thighs and his stomach as he moved and contorted to make way for her impressive balancing act.

After this comical, yet remarkable feat, the piece took a definite turn towards an acrobatic showcase as the three men and three women performed balances, lifts, turns, and throws that made the audience gasp and feel their stomachs drop. While lacking some of the seamless transitions and sense of performance that often accompanies a typical dance troupe, Circa offered up an exciting perspective on acrobatics in a concert setting.

The true delight of the piece was the final section where one woman managed to hula-hoop at least six hoops (I lost count) around her body at once, sometimes using her knees, her wrists, and even her neck. She weaved in out of the hoops with an ease and delight that was truly mesmerizing.

Closing the program was María Pagés Compa­­ñía, a flamenco company from Spain, with Desio Y Conciencia (Desire & Consequence). The piece was accompanied by live musicians onstage, and it alternated primarily between solos by María Pagés and ensemble sections with the rest of the dancers.

Pagés changed dresses about four times, each time revealing a slightly different expression of her character, but always with the sensual, emotional flair of flamenco dance. Her dancers seemed a bit more emotionally subdued, as their greyish costumes with red accents intimated, but their footwork was impressive and the true meat of the piece. Even in the final section, as the dancers and musicians sat, clapping, stomping, and cheering, while Pagés danced solo, one got the sense that without the community of all of them on stage, it would all fall flat. My only regret at the end of this long, nearly 2 and ½ hour program of dance was that we, the audience, could not participate from our seats.