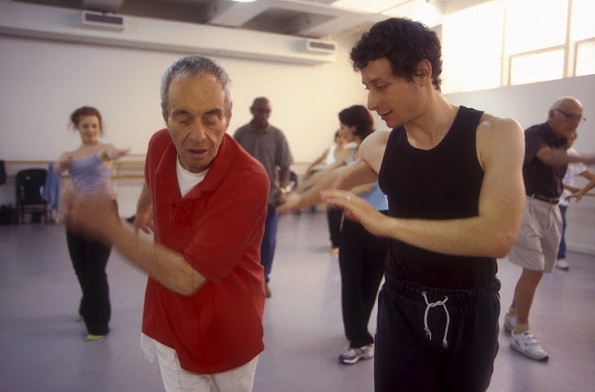 Parkinson’s disease affects the central nervous system and causes movement-related symptoms, including shaking, rigidity, slowness of movement, difficulty walking and falling backward. While there is no cure for Parkinson’s disease, medications, surgery and physical therapy may help curb some symptoms.

In 2001, Olie Westheimer, Executive Director of the Brooklyn Parkinson Group, approached the Mark Morris Dance Group (MMDG) in Brooklyn, NY, with the idea for a real dance class for members of her group. Why not use the movement of dance, as well as the joy of live music in a class setting, for a positive and beneficial way to help those affected with Parkinson’s disease? A dance class would also offer those with Parkinson’s disease an escape from their busy schedule of doctor and therapist appointments, Westheimer thought. So, Dance for Parkinson’s Disease (PD)® was born.

“The idea is for professional teaching artists to integrate movement from modern, ballet, tap, folk, social dancing and choreographic repertory to engage participants’ minds and bodies and create an enjoyable environment for artistic exploration,” says David Leventhal, the program manager and a founding teacher of Dance for PD®. “Because Dance for PD® focuses on the aesthetic movement of dance rather than acting as therapy, participants in class are encouraged to approach movement like dancers rather than as patients.” 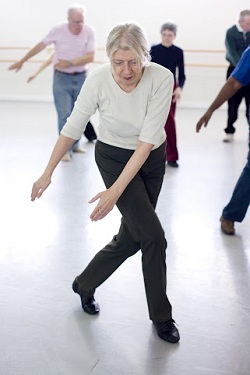 Members of the Brooklyn Parkinson Group at the Mark Morris Dance Center. Photo by Rosalie O'Connor

In Brooklyn, the Parkinson’s dance classes are held every Wednesday at the MMDG. The 75-minute class has anywhere from 35 to 55 participants, along with two to four teachers and a musician, and is always team-taught. The class begins with everyone seated in chairs so that participants can explore a range of movement and warm up their body without having to worry about balance.

“The important thing here, I think, is to bring in a range of movement qualities and dynamics, and to create sequences that are diverse in their material,” says Leventhal. “So, for example, we’ll alternate an arm sweep with a sharp point across the room, or we’ll do a seated tap exercise so that people can explore all the different dynamic ways you can use your feet, which dancers take for granted but that other folks don’t really think about.”

For some exercises, teachers try to incorporate a narrative element, such as telling a story through physical gesture or setting up a scene for people to recreate. After about 40 minutes of seated dancing, the class continues with exercises at the ballet barre or behind the chairs. Then, the last 15 to 20 minutes are spent moving across the floor in a variety of styles, and participants who wish to remain seated are still always included. The class always ends in a circle, where teachers lead participants through a circle dance and a reverence.

The Dance for PD® classes in Brooklyn also incorporate Mark Morris repertory. “Mark Morris’ choreography always emphasizes quality (how movement is initiated) over quality virtuosity (how high you can kick your leg in the air),” says Leventhal. “In this way, he creates unique aesthetic worlds that demand an imaginative approach, particularly well-suited to the PD class, where imagination is key to initiating movement.”

People with Parkinson’s disease can benefit greatly from the Dance for PD® classes. Leventhal says that many participants report that the classes boost their confidence levels, alter their attitudes about what it’s like to live with a chronic illness and help them better cope with some of their symptoms. Through the classes, they are also surrounded by a close-knit community, which helps with social isolation and depression. Participants are also rejuvenated with a sense of what is possible physically and artistically.

“The fundamentals of dancing and dance training – things like balance, movement sequencing, rhythm, spatial and aesthetic awareness, and dynamic coordination – seem to address many of the things people with Parkinson’s want to work on to maintain a sense of confidence and grace in their movements,” says Leventhal. “Suddenly, they are surrounded by a world of possibility, not limitation, and it’s liberating and inspiring for them and for us.” 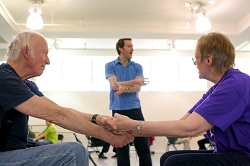 John Heginbotham leads members of the Brooklyn Parkinson Group in a Dance for PD class at the Mark Morris Dance Center. Photo by Amber Star Merkens

Leventhal recounts many success stories. “One man used the tap steps he learned in the Brooklyn class to help him connect with the floor when he got out of bed in the middle of the night,” he says. “One woman recently told us that she was able to enjoy herself at a wedding because she danced all night, and she was able to do that because she developed confidence and stamina in our class. A couple in Louisville told me that they enjoyed themselves more in the Dance for PD® class than they had in the last five years. One of our Brooklyn students tells us that his doctor knows when he hasn’t been in class because certain symptoms are worse.”

In 2007, Leventhal and the other Brooklyn Dance for PD® teachers started training other dance teachers. They offer two tracks: one for dance teachers and one for caregivers and movement and medical professionals. The Brooklyn team is finalizing a certification program, which will include a combination of coursework, testing, video submissions and in-person coaching. They also hope to offer a course for those who wish to be registered teaching assistants.

“I love seeing people learning dances and dance forms for the first time,” says Leventhal,”, smiling at the sheer joy of learning to move in a new way. The class becomes a family of sorts, so the hierarchies that might exist in other forms of teaching slip away, and we become facilitators in a wonderful journey for people regardless of the limitations they walk in with.”

For more information on Dance for PD® visit http://danceforparkinsons.org

Photo: David Leventhal, program manager and founding teacher of Dance for PD, with a member of the Brooklyn Parkinson Group. Photo by Katsuyoshi Tanaka.