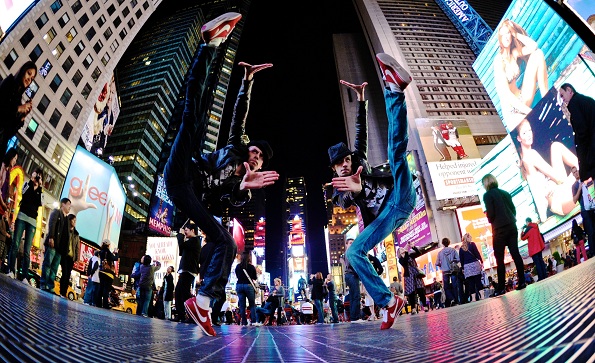 I still remember standing in the dressing room with my friends at our little dance studio, looking through some magazine, and seeing them.  They were two young men captured in photograph doing fantastic animated moves that made us think they could pop right off the page.  And, what made the images truly stunning was that these two men were completely identical in face and form.  Fast-forward to this Spring, when I excitedly went to see the performance in honor of Capezio’s 125th Anniversary at City Center in NYC.  I was sitting there, content in my seat, thoroughly sated with the entertainment splashing across the stage when, suddenly, there they were!  They moved with exquisite precision and with a kind of synchrony that went beyond moving at the same time.  More than ten years after I’d first seen their image, they’d finally leapt off the page and onto the stage in front of my eyes.  These identical dancers are the Lombard Twins, Martin and Facundo, who have been dancing together since they were born on the same day in Argentina.

Martin and Facundo began dancing at age 7, and by the time they were 13, they’d made their TV debut on the popular Argentinian show Rhythm of the Night.  When they were 21, they moved to NYC to pursue their dreams, and soon were performing with music icons such as the King of Funk, James Brown, and Mambo King Tito Puente. They’ve continued to dance and have expanded upon their talents by branching into other visual art forms.  They have written, produced, directed, acted in, and edited their own films, have performed and choreographed for music videos, and have been photographed for huge publications such as Vogue.  By now, the Twins no longer fit into a specific cast.  As if to prove this point, they have developed their own dance form that they call “Free Expression”, that is not so much about style or a genre of dance as it is about allowing one’s emotions and sensations to come through one’s dancing.  Free Expression “transcends the rule, traditions, and attitudes inherent to many established dance techniques of today and focuses on individual emotion and expression”, say the twins.

The Lombard Twins in their dance film 'Free Expression'

I was very privileged to interview the Lombard Twins, and am happy to bring this to you in July, when not only will you be able to see Martin and Facundo in the movie Men in Black 3, now out in theaters, but you will also be able to join me in wishing them a very happy birthday!

Clearly, your career is based largely upon and takes advantage of your “twin-ness”. Does either of you work a lot on your own?

It all depends.  We did some things separately like, for instance, the scene for the trailer of Men In Black 3, but we don’t really work separately.  I say “do things” instead of “work” because we don’t feel that we are working, we feel that we are doing something that we love. This is how we have lived every day since we were kids. I think that the last time we have really “worked” was at 12, fixing tires and delivering wine.  [Everything since] has been about expressing ourselves.  About twin-ness, hahaha (smile), the twin image was always there. It is not something that we are trying to sell or take advantage of. We were born like that. We don’t think that what we have achieved has anything to do with being twins. We believe our art is beyond a twin image.

Do you come up with your routines together, or does one brother usually take charge of one element or another?

Sometimes we come up with ideas separately and sometimes we don’t. Once we listen to a song we start to talk about what we feel and see. Sometimes, in terms of moves, we don’t totally agree so we search for different moves until we both agree and feel [they are] good for the piece.

Are there days when you wish you were not a team of twins?

NO, not at all.  We have been through the same experiences, we feel the same, and we have the same dreams. We were always a team on and off the stage. We were born twins and thinking about getting rid of that would be like not accepting who we are.

Do you have any touring ahead of you?

We are performing segments of our dance concert Lombard Play Piazzola with different symphonies and philharmonic orchestras around the country and Canada, and giving Free Expression Dance workshops as well. But, we are really focused on films at this moment. When the movie Step Up 3D came out it opened doors for us to show not only our dancing but the acting side as well. So we want to keep doing that. We are dedicating time to shoot our own short films. We have written and directed, Infancia 34, Free Expression, Sublevados, and Chant Et Fugue, which are being screened in different film festivals around the world.

What are your movement inspirations?

Since we don’t think we have a style but a way of dance (Free Expression) which has to do more with being 100% connected with your emotions and feelings rather than a particular style of dance, most of the time our influences are not related with people but by life experiences.   We do have inspirations. Sometimes I see dancers doing a move and I go like, “wooow, I loved that.”  That inspires me to keep searching for more.

When the time comes to create, that’s something that we don’t pay much attention to.  We don’t use steps from others in our dance compositions. Well, sometimes in tap dance we do use them, but we make our own rhythms. In the creation process, we try to avoid everything we have seen, avoid obvious things; we like to be unexpected.  We don’t even create a piece around things that we already know how to do.  Our moves come from a vision that we have while listening to the music and what it makes us feel.  We never know how to execute the moves that we see. Every piece that we create is a whole new world and requires hours and hours of rehearsal.

Is there any advice you can share with today’s young dancers who want to follow a path similar to yours?

Never stop dreaming. There is not an age to dream, there is not an age to start to do what you feel. Understand that things don’t come out easily. We all have different ways to get to our dreams. If things don’t turn out the way you expected them, don’t take it as something bad, there must be a reason why.  Competition doesn’t exist if you are truly being yourself. We were all born as individual human beings. We are all unique. So, appreciate who you are.

What projects do you have coming up?

We are writing a script for a feature film based on our life story. That’s what we want to do next.

What is your greatest motivation?

My Dreams. Also to look at the sky, lift my arms up, take a deep breath, and feel the presence of God. That motivates me.

For more information about the Lombard Twins, check out: www.lombardtwins.com