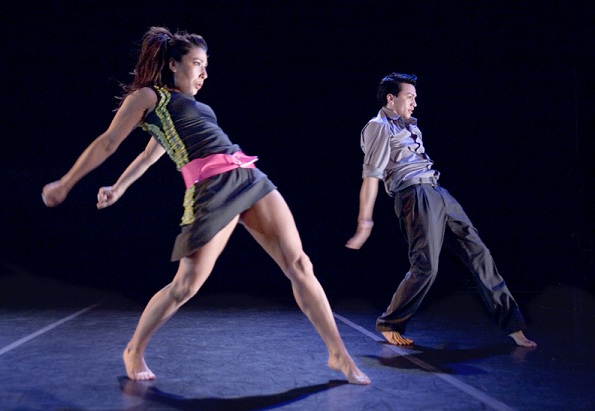 On May 12 and 13 L.A. Contemporary Dance Company produced its first ever repertory showcase of dances from the past, presenting pieces that premiered between 2005 and 2010. Seven years have passed since LACDC, founded in 2005, emerged on the contemporary scene and boy, do they have a wealth of great material to show for it! I was excited to take in the choreography of renowned artists Terri Best, Adam Parson, Ryan Heffington, Nichol Mason and Artistic Director & Co-Founder Kate Hutter. I learned that Hutter’s three pieces were intended to document the journey of her own personal experience with LACDC. Clearly it has been a beautiful journey for all, as explained through the movement and expression by the 18 company members on stage. This is LACDC’S largest company to date.

I was enthralled by Adam Parson’s piece The Initiator, and when intermission hit, I found him immediately, excited to reflect on the profoundly moving experience I had as a spectator. He explained that this work, created in 2009, was rooted in the discoveries he made on a trip back to his home country of Kenya.  The broad theme was the suffrage of women in third world countries, and how, despite their limitations as females in society and the ever-threatening male hand, they continue to dream for a better life. Their determination to use their minds leads them to escape and walk miles to schoolhouses to learn to read and write. Parson depicted this exact story with the six females in his piece. I was struck by the way he used clear conceptual gestures and movements to mark each phase of the women’s journey towards hope. Parson expressed the monotony of the chores clearly felt by the repeating choreography. When the women were being struck, in which a light was shined from stage left, they sat into a prayer position. “The men could not threaten them if they were praying”, explained Parson. Their joy of learning and communicating was felt by their expressive faces, big glorious steps and partnering. One of my favorite elements was the pictures that streamed behind the dancers of third world women, who were smiling with hope. It makes our problems feel so little. 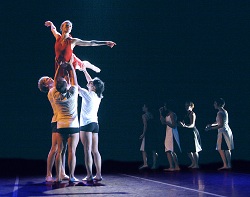 'The Union' by Terri Best. Photo by Joe Lambie.

I thoroughly enjoyed what seemed to be a color wheel revealing itself before my eyes in Terri Best’s The Union. The men and women began walking across the stage, almost nude, to then put on white and black costumes. As the piece continued blossoming, so did the colors of their wardrobes. Best described in the program: “The Union explored themes of incarnation, duality and cycles of order and chaos. In it, we witnessed the coming of age of a woman, and the perpetuation of life through the attraction and union of opposites.” This was such a tall order to create through dance, but not for the immensely talented Best. I enjoyed how honest and nurturing this piece felt. I could tell the dancers honored their place on stage, as they took us through these concepts, embodied in large part by the journey of a woman (in red) and her coming of age. I particularly liked the intimate pas de duex with her partner with whom she fell in love. The lifts in this piece were sensational. Leave it to Best to present explosive and sweeping movement, full of classical technique. These dancers were both athletes and I felt as though I was watching wild flowers bloom by the end!

Diary Entry Final was the brainchild of the extraordinary Ryan Heffington. His contemporary movement was clear, tight and crisp in this piece about three life-changing events in his life, all mixed into one memory. Heffington has a way of story-telling that you can easily grasp onto. My eyes never wavered, as I was transfixed by his staging and articulate phrases, and how they seemed to seamlessly work with the concoction of music and orchestra noises. The dancers were committed, especially the trio of women mid-way through the piece. I appreciated the difficulty behind his ideas and patterns.

Kate Hutter – well what can I say?! This woman is equally as strong a dancer and performer as she is a choreographer. Of her three pieces, although I thoroughly enjoyed the duet Passion Plays (2005) danced by herself and Kevin Williamson, I was most enamored by Looking Back (2010). This was extraordinary! The entire piece faced upstage, and was guided by the dancers’ breaths, as there was no music. Looking Back referred to a step back in history as well as the anonymity and new identities created as the dancers performed the piece facing upstage. The large cast of men and women were adorned with long maroon skirts with their backs exposed to the audience. The skirts moved like another graceful appendage as their spacious movement traveled them downstage to upstage, and back again with mesmerizing patterns and structure to each phrase. Hutter’s remarkable staging and craftsmanship of phrasing could be a documented in a textbook of “how to choreograph a piece”.  The dancers executed her vision with intuitive fluidity, control and depth.

I was pleased with the entire presentation by LACDC, but the above four pieces were the stand-outs of my experience. More so, I am ecstatic that LA has a contemporary modern company, who is thriving, growing and testing the boundaries with every next step. Taking a look into the past certainly revealed the diversity of LACDC’s repertory. Needless to say, I can’t wait to see what the future holds!