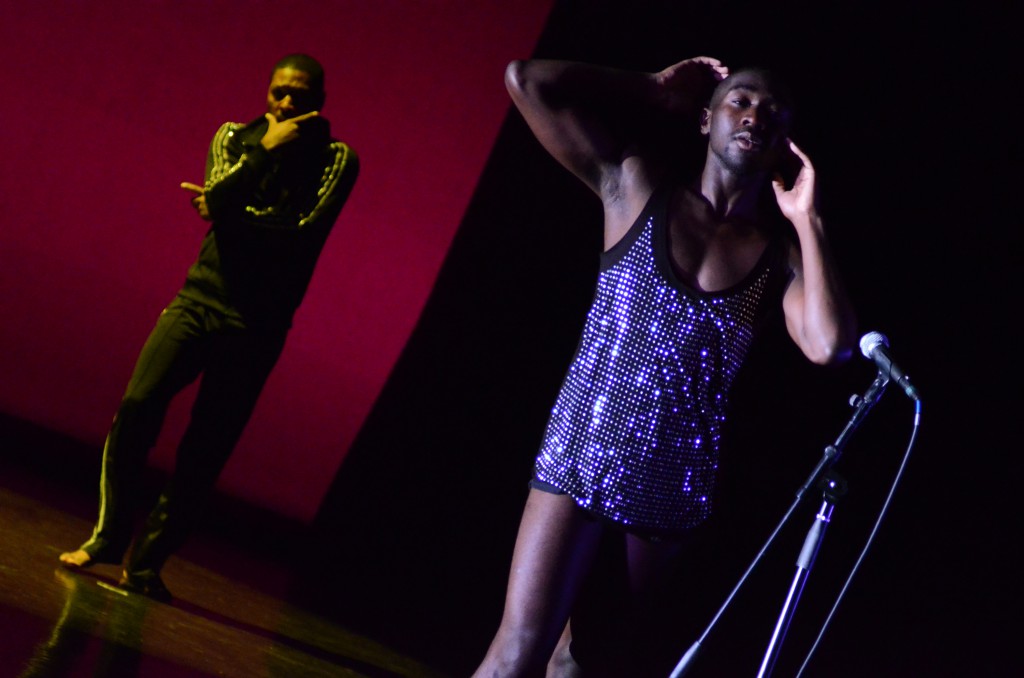 The mark of a truly great artist – some may say it is technical virtuosity; some may deem sheer creativity; some may think public persona defines ultimate artistry. In my humble opinion, duality in artistic works is a telling feature. Work that exposes the relationship between two seemingly unrelated things; work that reveals connections between two worlds; or, work that strives to show that our world has greater levels of interconnectedness than we previously thought true. On these claims alone, Kyle Abraham is, in my mind, a great artist. His Bessie-award winning evening-length work, The Radio Show, dealt with the expiration of famed Pittsburgh hip hop radio station WAMO, while simultaneously exploring the debilitating conditions of his father’s Alzheimer’s. In his newest work commissioned by The Kitchen, Live! The Realest MC, Abraham pairs the story of Pinocchio with a young male’s emotional journey of coping with his gay identity. Abraham and his company, Abraham.In.Motion, displayed this evolution of sorts via the mark of hip-hop culture. From the music to the video projections, to the fashion, Abraham’s work, presented in early December, was a whirlwind of urban energy from start to finish.

I entered the venue on Thursday, December 8th to the preshow music of pop songstress and icon of the gay community, Robyn. Beginning with a delicate solo by Abraham, donned in gold sequin racer back top and metallic gold pants, he filled the space with subtle pops and locks that were game for explosion at any second.  Making a motif out of effortlessly balancing on his toenails, he established the duality of vulnerability and strength that effectively coexisted throughout the entire work.

Outfitted in ‘old school’ Adidas jumpsuits, Elyse Morris, Maleek Malaki Washington, and Chalvar Monteiro then charged through the space, and Abraham backed away, as he shed light on a moment of nostalgia. The video backdrop (impressively designed by Carrie Schneider) revealed the daily adventures of a young boy in urban America running through the city streets, jumping fences and chasing friends. This was just one of many memorable vignettes Abraham provided his audience.

The scope of hip-hop culture and attitude permeated throughout the work, in equally thrilling and notable moments. At one point, Hsiao-Jou Tang and Rachelle Rafailedes engaged in a fast-paced series of harsh leg tosses and quick spirals to enliven the heavy pounding of the bass in the diverse musical score (edited by Herman “soy sos” Pearl). At a split second’s notice, the ladies both slowed down to pedestrian walking, as if their flurry of movement never happened. This ‘too-cool-for-school’ attitude worked as a practical narrative as much as it did with satire for the piece (more duality!).

In a standout moment, Chalvar Monteiro entered the space, clad in short shorts that put Daisy Duke to shame, to give us his own brand of voguing. Strutting and shaking through the space, Monteiro was unapologetic about sky-high battements, punctuating his smooth, sassy movements. Stopping short of satire, he impressively displayed another important duality in the work: the gender economics of hip-hop culture. Monteiro clearly displayed a decidedly feminine aesthetic, further emphasized against Maleek Malaki Washington’s overpowering masculinity (at one point causing him to utter the insensitive male quip, “Damn, can I hit that?”).

Seamless in its duality, Abraham’s newest evening-length was enthralling from start to finish. The dancers were fierce, the lighting (designed by Dan Scully) was expertly crafted, and most importantly, the work made me think.