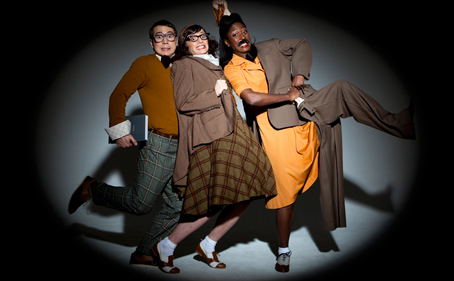 Some Like It Hip Hop is an original and highly entertaining dance theatre masterpiece that is fun, fun, fun! This innovative production showcases company founder Kate Prince as the director but also as lyricist, co-choreographer and co-writer.

ZooNation attracts an audience to the theatre that is varied from long time dance lovers and children to even those who usually just watch MTV; attracted to commercial music and dance.

Many children were in the audience. It’s so refreshing that founder Kate Prince has made a family friendly show that will encourage many children to pursue the arts. The stereotypes of hip hop being violent and overly sexualised are broken and hip hop is portrayed in a way that creates a safe show for anyone to come and see.

The story hooks the audience in, continually introducing more dance characters and further evolving others. The live song and acting moves the company from a dance only company to a revue.

The number ‘Invisible Me’ was like a hip hop version of Chicago’s ‘Mr Cellophane’, showing an oppressed character. It demonstrates how hip hop dance can be fused with music to further evolve the dance narrative and allow dance to be a much more communicative theatre language.

I’m a big fan of clean comedy (believing that it takes more skill than reverting to toilet humor) and there are so many moments to make you smile. Natasha Gooden’s doll like face is simply delightful as the dance character ‘Oprah Okeke’. The dancers’ faces and acting skills move them beyond dancers alone into true performers.

The lighting design by Johanna Town, is intricately designed and sets by Ben Stones are well integrated. The sets are as big and transformable as any top West End musical. So often dance is executed on a rather empty and bland stage but not in this show, the sets move and are constantly changing. There is never a dull moment.

The music by DJ Walde and Josh Cohen is original, enhancing the dance communication. There is a symbiotic relationship between the movement and music, true to the foundation of hip hop in the 1970s in Bronx NYC.

The big numbers at the end are a bonus and the whole cast, including the vocalists each have a short freestyle solo, reminding us of the spontaneous and competitive nature of street dance. Many of the performers move with explosive speed and risky air-born lifts and flips. The show is simply invigorating.