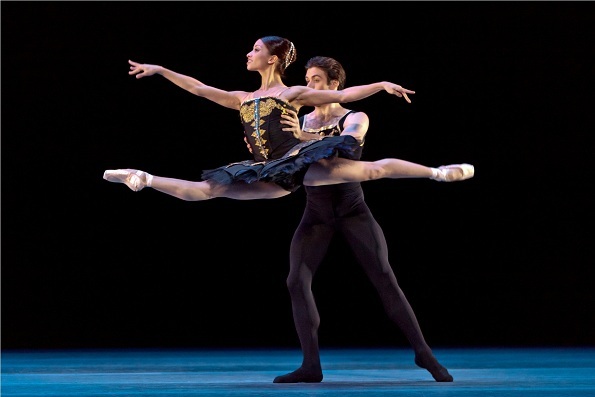 It was a packed house for the Friday evening performance of Houston Ballet at the Joyce Theater. The Texan company brought their ‘A-game’ with an impressive array of repertoire from some of the world’s most sought after choreographers: Jorma Elo, Jiri Kylian, and Christopher Bruce. New Yorkers lusting for great dancing were not disappointed.

With simple costumes of short black unitards and dramatic stage lighting, the performance opened with Kylian’s all-female ballet Falling Angels, featuring an ensemble of eight dancers and the pulsating rhythm of Steve Reich’s Drumming. Kylian created Falling Angels over ten years ago, but the ballet still feels fresh and innovative.

No particular dancer stood out because the group as a whole was the ‘star’ of the piece. All of them danced the frenetic, quick movement in excellent unison. Each dancer engaged every muscle of her body; fully committed to the choreography and driving beat. Kylian included moments for each performer to break from the unison work and dance a brief solo, which kept the piece from being too repetitive.

The dancing was aerobic and incorporated the use of exaggerated facial expressions. Sometimes, the dancers tugged back and forth on their unitards to further enhance the movement. Their endurance was impressive, as they maintained the high energy from the moment the curtain went up until the end of the ballet.

ONEendONE with Artists of Houston Ballet. Photo by Amitava Sarkar

The second ballet on the program was Jorma Elo’s One/end/One, a display piece for the technical virtuosity of eight Houston Ballet dancers. It contrasted classical attire (the ladies wore tutus and the men were in tunics) with contemporary movement. Elo contorted a leg extended in tendu to an unballetic posture with the swerve of a hip and bend of a knee. Dancers’ arms took a classical form, and then rippled into a more gestural position (if position is even the correct word because it appeared as if the dancers never stopped moving). His choreography was relentless, but the dancing was brilliant.

In the opening section, Elo played with the idea of tableaux; creating a picture with the dancers in space and then allowing it to quickly dissolve into a series of fast turns or footwork. Despite the speed of the choreography, the dancers executed the movement fully and the men covered the entire length of the stage in just a few jumps. Dancers entered and exited the stage throughout the section, resolving in several different variations of solos, pairings, trios, quartets, etc. A particular stand out in both the first and final section of the ballet was Melissa Hough, who joined the company in 2010 after dancing with Boston Ballet. She attacked every intricate step with an uncanny amount of speed, poise, and confidence.

There were many moments of creativity and beauty in One/end/One. In the adagio, danced by Soloist Karina Gonzalez and Principal Connor Walsh, Elo produced an unusual yet stunning interpretation of a typical pas de deux. Several lifts had Walsh not only suspending Gonzalez in extended positions, but also required him to lift a leg to arabesque and maintain the ballerina’s placement simultaneously. Another interesting moment in the pas de duex had Walsh lying on his back with his legs stretched up to the ceiling, swaying back and forth like windshield wiper blades at Gonzalez’s command. The two made the difficult partnering work look smooth and delicate.

It was interesting and intriguing, but asked the question, “What is the point?” This is not to say that a choreographer should ever have to explain his or her work, but the intent behind the ballet was curious. Was Elo mocking ballet with the choreographed quirks and unusual angles or simply further exploring both the formality and litheness of classical form?

The final ballet of the night was Christopher Bruce’s Hush, a clever vignette of dances for three men and three women. Hush brought to life the unique musical partnership of violinist Yo-Yo Ma and vocalist Bobby McFerrin. The dancers resembled mimes with the ladies dressed in pom-pom adorned muslin dresses, the gentlemen sporting suspenders or old-fashioned suits, and all with white faces. It had the feeling of a 1930s circus.

From playful, to sentimental, frenzied, and joyous, the ballet ran a gauntlet of emotions. Bruce hoped to tie in the element of everyone’s inner child and did so successfully. It’s a relatable piece, which sparked several bursts of laughter or sighs of pleasure from the audience.

The opening section had series of twists, turns, and lifts with the dancers often linked by their limbs. From there, each section highlighted a different dancer with original and creative choreography. Jessica Collado danced a fluid, carefree solo exceptionally well. There were several tender moments from Kelly Myernick and James Gotesky, who brought a maternal and paternal aspect to the ballet. And a trio between Melody Mennite, Rhodes Elliott, and Ilya Kozadayev to McFerrin and Ma’s interpretation of “Flight of the Bumble Bee” was particularly fun. The ballet ended with a ‘hoedown’, eventually winding down to a final picture of all six dancers heading upstage, linked arm and arm.

Running a little under two hours, it was a well-balanced program. The evening showed the technical proficiency of the company, as well as original and interesting repertoire. Thank you Houston Ballet for reminding New York how much exciting dance exists outside of the city’s perimeter.