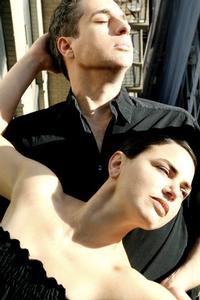 The Animals Come Out at Night

Sitting in New York’s dome-shaped West End Theatre before Rebecca Stenn’s Fantasy, Lies, Hubris and Voyeurism, you can’t help but take in the space and wonder how all its elements will come together – the bare stage and exposed back wall, the nearly camouflaged piano and the laptops and music equipment in the balcony box above. What appears at first glance to be simple, is still hidden but planned, and representative of the still of the night and the mysteries that darkness seems to hold.

The piece opens with Stenn’s stillness as though we’re looking on in some far-off pasture at dusk. Benton Bainbridge’s video projections of clouds move across the back wall. Stenn is joined by three other characters – Eric Jackson Bradley, Trebien Pollard and John Mario Sevilla – who, all clad in pedestrian clothes, circle her. Stenn breaks the pedestrian feel in what comes as almost a relief. Stenn, a former member of Momix for several years, moves with incredible softness in her upper body that rests so well against Alice Hwang’s live piano accompaniment of Chopin’s Nocturnes. Her movement with Charlie Chaplin footwork and bird-like wafting arms is animalistic, as Stenn as the first creature of the night plays alone in the quiet.

Two characters leave the stage, and as darkness prepares to fall overhead, only Pollard remains, left unaffected by Stenn’s curiosity of him. Then we begin to wonder, who are these figures? As we begin to wonder who they are, we begin to care for them. Are they happy? Are they lonely?

Throughout the entirety of Stenn’s Fantasy, her most recent work, we try to understand these characters. Although we may not find out who they are or where they’re going we are made to feel close to the characters. This is through the space’s intimate setting, the relatable quality of their movement (the choreography is infused by things we all know like running, yoga, stretching, walking and movement that resembles the animal impersonations we do as kids), and their interaction with one another. Whoever or whatever they are, we’re concerned for them.

The relation between all the characters is a common thread throughout the whole piece. The partnering sequences are particularly memorable, well-produced and executed. I wanted a ball-of-the-foot swivel partnered turn between Stenn and Pollard to go on forever.

The next several scenes all incorporate more environmental projections as the backdrop – the evening sky, a brick wall, snowy field, even a car on the freeway (the only sign of modern civilization we see), accompanied sometimes with Hwang’s Chopin music, sometimes silence, and sometimes the sound of the piano meshed with Jay Weissman’s modern electronic sounds. We see different combinations of the four characters move and frolic together. We can’t help but see them as animals and as creatures of the night with Stenn’s bird-like arms, Bradley’s moments of nonstop hopping and Sevilla falling over sideways as though he’s fallen asleep on his perch.

There is primitive nature in us all. There is a fascination with another being, but also a selfish desire to survive and succeed. These characters all interact with one another at some point, but in the end, one by one, they leave until only Stenn is left onstage. The work discusses the balance of relying on others but needing to be one’s own rock, of making your way through all of life’s distractions and all of the things and people in your path. We can long and hope, but we can’t always depend. Sometimes in the end we only have ourselves.