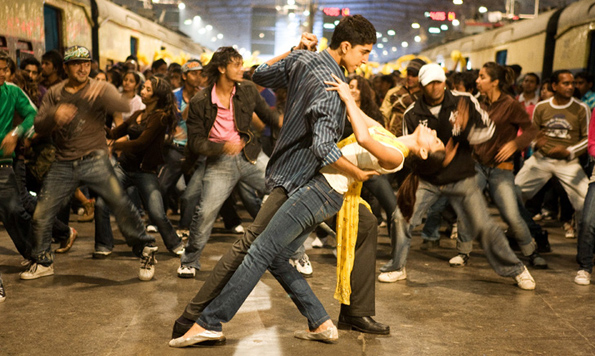 Longinus Fernandes is a renowned Bollywood choreographer and dancer, having created the much loved final dance ‘Jai Ho’ for the Oscar-winning movie Slumdog Millionaire. Winner of the 2009 Filmfare Best Choreography Award and the 2009 Astaire Awards for Best Film Choreographer, Longinus started out as a dancer in Hindi cinema in the early 1990s, paving the way for work in film, television and music videos. Most recently Longinus has been choreographing for So You Think You Can Dance Canada and for the film Eat Pray Love starring Julia Roberts.

Tell us about your work for Slumdog Millionaire.
My working experience with the Master Craftsman (Danny Boyle) was simply phenomenal. He basically lets you do whatever you want because he strongly believes in “allocation of jobs”. I clearly remember that day when he told me, ‘Longinus when you work I will only observe and make minor corrections’. That meant the world to me. Mr. Danny Boyle is an institute. The way he brings out the best from his cast and crew is a treat to one’s eyes. He was the first person to inform me about Dave Patel and Freeda Pinto being non dancers. I was zapped. Later on in the day he personally came up to me, entrusted his faith in me and boosted my confidence by advising me to keep the dance moves simple and real, as it would work wonders for the film as well as the song. And there you go, the rest is history …

Did you envision that the movie would be such a success?
I am sure that even the makers could not have imagined the success. Honestly speaking, none of us had the faintest idea that this would turn out to be a masterpiece. All said and done, Danny Boyle is not only a great film maker, he is also a great human being.

How has the success of Slumdog Millionaire changed your career?
The success of this particular film has not only changed my life and career alone, but all those who were involved in it. It has taken me to another level all together. It has made me a name to reckon with (pertaining to Bollywood style of dancing internationally). I have done more projects internationally than in my own country.  I am sure there is nothing better than this that I could ever ask for or even have dreamt about.

What projects have you been working on since Slumdog Millionaire?
After Slumdog Millionaire I have been travelling all around the world and working on:
Honour Killing in London (An IndoBritish Film directed by Avtar Bhogal)
Eat Pray Love (Directed By Rayan Murphy starring Julia Roberts)
Bollywood Hero (Mini series for IFC starring Criss Kattan)
The Bowl Games Of America (2009)
Yahoo It’s You Anthem (TV Commercial)
SpongeBob Bollywood (Nickelodeon)
Gillette Shaving Cream – Singapore
So You Think You Can Dance Canada Season 2 and 3
1st International Film Festival in Aruba
The Indian Cultural Festival in France

How is choreographing for Bollywood/Indian dance different to choreographing in other styles?
Choreographing for a Bollywood film is no different at all. It is the same because it has to be executed in a similar manner. The only difference is to attain the right postures and to be more loud and expressive. In short, every dance style has its own definition and so does Bollywood.

The Bollywood dance style has been growing hugely in popularity in western countries. Can you explain the increased interest?
If the craze for Bollywood is increasing it’s only because of its culture and population all around the globe.  And above all the number of Bollywood films released every year is unbelievable. Around 500 to 700 films release every year, universally (in various languages). And we can’t forget films like Slumdog Millionaire which was appreciated by one and all.

What is your dance background? Do you still perform as a dancer yourself?
I am basically a freestyle dancer who is more of a performer. I have tremendous regard for James Brown, Elvis Presley, John Travolta and Michael Jackson and it gives me immense pleasure and pride to say that I am a MIXTURE of all these greats put together in my own small way.

I started off as a dancer to eventually reach where I am today and I do dance off and on when required. I did participate on Dancing With The Stars (Indian Version). I am glad that I did well and I became a household name (thanks to television).

Where will we see your work next?
At the moment I am working on three big Bollywood films which are due for release soon. Guzaarish in November 2010, Khichdi in December 2010 and My Friend Pinto in January 2011.