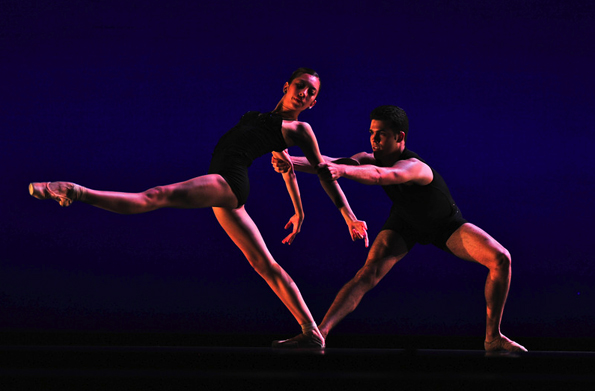 Aaron Smyth is a young success story. Raised in Australia and now living out his dance dreams in New York City, Aaron was accepted into American Ballet Theatre II in April. ABT II is a small classical company of twelve young dancers of outstanding potential. ABT II prepares these dancers to enter American Ballet Theatre and provides performance opportunities across the US and the world.

A well rounded performer, Aaron has trained in gymnastics and many styles of dance and was awarded the RAD Solo Seal Award. He was a top 4 finalist in Australia’s Got Talent in 2008 and has won awards in many dance competitions worldwide.  His most coveted award was the Gold Medal and the Bravo Audience Choice Award at the Genee International Ballet Competition in Toronto, Canada in August 2008, where his talent, charisma and stage presence awed both the crowd and judges.

Now Aaron is conquering the dance world and enjoying world class training and experiences with ABT II.

Tell us about life at American Ballet Theatre II.
Basically my day starts with company class at 10:15 am to 12:00pm. Then we start rehearsing repertoire for upcoming tours and finish around 5:00pm, Monday to Friday. We are set to be traveling to Columbia, Costa Rica, Spain, Italy, London and all through USA when I resume in September.

In my spare time I often walk through Central Park, take classes at Steps on Broadway, or meet up with friends and just relax. I feel very fortunate to live here!

What is your greatest challenge at ABT II?
My greatest challenge would probably be the fact that we travel so much and I basically live out of a suitcase. But we get to dance a lot and see amazing new places, which you don’t get to do in a lot of other companies. I am just thrilled and happy to be a part of this company.

What do you enjoy the most about dancing at ABT?
I have been a part of the company, by being with the school as well, for the past 2 years, and I feel like it’s one big family here. And the fact that I get to take class everyday with my idols like Roberto Bolle, Marcelo Gomes and Angel Corella, just to name a few, is so inspiring.

Tell us about the ballet competitions you have competed in this Summer.
I got the opportunity to do these competitions through a girl from ABT II and we represented the company. First was Jackson International Ballet Competition which is held every 4 years. It’s considered the Olympics of Ballet. My dance partner Alys Shee and I won the Silver Medal there. We then went onto Cape Town South Africa and won the Silver Medal there too. Our final destination was Varna Bulgaria where I was a non-competing partner because of confusion with the age deadline. The whole experience was pretty tough, but rewarding. We only had a short time to prepare and we were plane hopping from New York to Toronto where we trained at the National Ballet of Canada studios with Alys’s coach Evelyn Hart. Then we flew to Jackson, and then back to Toronto to train, before going onto Cape Town. We then flew straight out after the Gala Performance to Varna, Bulgaria. I am now departing for New York to finalise paper work for my Visa and organise accommodation, which is always a drama. I will be back in my home turf, Australia, early August for a three week break before returning to New York early September.

What are your future goals? Where will we see you in five years?
I am not sure where I will be in five years, but I am working towards becoming a Principal Dancer with ABT as soon as possible.

And we have no doubt that Aaron will taste success! Good Luck Aaron!