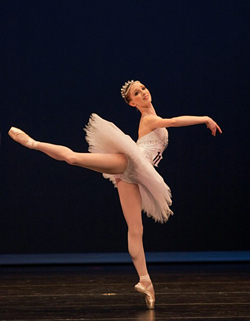 Sydney Eisteddfod Announces 2010 Judging Panel
Sydney Eisteddfod tells us that Marilyn Jones, OBE, and Wim Broeckx, director of the dance at Royal Conservatory in The Hague and president of the artistic committee of Prix de Lausanne will be adjudicating the McDonald’s Ballet Scholarships this year. They will judge the heats, quarter and semi finals and will be joined by David McAllister, artistic director of The Australian Ballet, for the round at Sydney Opera House.

Wim Broeckx will also be holding a special workshop at the Dance Spot, Randwick, on Sunday July 25th.  This is sure to be popular, so for further details, keep an eye on the Sydney Eisteddfod website www.sydneyeisteddfod.com.au

Leigh Rowles, head of student training at The Australian Ballet School, will judge the Robert & Elizabeth Albert Junior Classical Ballet Scholarship with a second adjudicator who is yet to be announced.

Last year, Sydney Eisteddfod blazed a new trail by introducing senior and junior dance championship for boys into their program.  This year, they are continuing their campaign to promote male dancing by including School Dance Group for Boys Only in their current Syllabus.

Entries for the 2010 McDonald’s Sydney Eisteddfod close on March 22nd, so get in quick!
Late entries will be accepted, but additional fees apply.

Sydney Eisteddfod Success
McDonald’s Ballet Scholarships have unearthed many treasures over the years and there are strong indications they have again struck gold with their 2008 winner Claudia Dean.

In the twenty months since she triumphed in the Big Mac, Claudia has added wins in the Alana Haines Award and the Genée International to her laurels and is now happily ensconced at the Royal Ballet School in London.  Claudia, who joined the RBS Upper School in September, has already been promoted into the second-year class and has made her debut with the main company at Covent Garden as a court lady in The Sleeping Beauty.  In March, she will represent the school in the Youth of America Grand Prix in New York and in July, dance the leading female role in Kenneth McMillan’s Concerto at the RBS Matinée at the Royal Opera House.  After the Matinée, Claudia will holiday in Australia, then return to London to begin her graduation year at RBS.

Claudia, who turned seventeen at the end of December, won the McDonald’s Ballet Scholarship at the age of fifteen years and seven months and holds a place in the record book as the youngest winner ever. The scholarship is open to students aged sixteen to nineteen years at 31 December and in 2008, Claudia met the entry requirements with just one day to spare!

Another successful McDonald’s Ballet Scholarship winner who has recently returned to Australia is Adam Linder.  After winning the second McDonald’s Scholarship in 1999, Adam studied at The Royal Ballet School and enjoyed a successful career with the main company at Covent Garden before moving to the Nederlands Dans Theater.  In Holland in 2005, he created a work entitled Over My Dead Body and established himself as a promising choreographer.

Adam, who has also appeared with Michael Clark Company and Rafael Bonachela Dance Company, is now finding fame as a creative artist.  In London, in 2008, he won The Place Prize for Dance with Foie Gras, a duet he performed with Lorena Randi. Now based in Berlin, Adam has never performed in his homeland, but he will be appearing in Are We That We  Are, a new work he is creating for The Sydney Dance Company which will premiere at the Sydney Theatre on March 23rd.