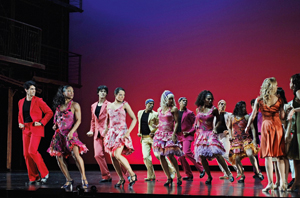 “The greatest Broadway musical of all time” – The Guardian (UK)

Director and Choreographer Joey McKneely has announced the dynamic young cast who will star in the Australian national tour of the show that is credited with changing the face of musical theatre. Joey McKneely was personally chosen by Jerome Robbins to reproduce his original choreography and has now toured the show to wild acclaim and sell-out seasons in London, Tokyo, Paris and Beijing.

“I believe this Australian cast will be the best cast I have assembled in 10 years of doing West Side Story. Their talent has impressed me. Really, Broadway calibre!” said Joey McKneely.

This vibrant new stage production plays from July 1st at Sydney’s Lyric Theatre for a strictly limited six week season. It will then tour to Melbourne, Perth, Brisbane and Adelaide.

The lead male role of Jets leader turned good-guy Tony, is to be played by Josh Piterman whose voice has become well known across the world thanks to his time with the smash hit singing group The Ten Tenors. A graduate of the Ballarat College of the Arts, Josh has toured with the Melbourne Opera Company, lived and performed in Japan, and has just finished currently sharing the stage with Geoffrey Rush in The Drowsy Chaperone at Melbourne Theatre Company.

The innocent romantic dreamer Maria will be brought to life by Sydney Conservatorium Scholarship winner Julie Goodwin, who has recently completed 200 performances in the lead role of Christine in Australian tour of Phantom of the Opera. Julie is a graduate of both the Sydney Conservatorium High School, and the prestigious Talent Development Project. Having toured in Asia and across Australia Julie is tremendously excited to have won the coveted role of Maria.

Packed with unforgettable songs, including ‘Maria’, ‘Tonight’, ‘Somewhere’, ‘America’ and ‘I Feel Pretty’, West Side Story remains a theatrical landmark. These songs are as popular now as when first written having been recorded by countless famous artists.

Based on Shakespeare’s Romeo and Juliet, in West Side Story two young people meet, fall in love and pledge their eternal loyalty to one another. Their different backgrounds ensure they are denied a happy future because of the intolerance and hatred of two antagonistic cultures. Fate leads the star-crossed lovers into a tragedy of heartbreaking proportions.