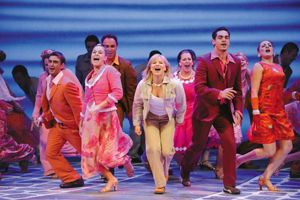 I remember seeing the original stage production of MAMMA MIA! like it was only yesterday. Not knowing too much about the storyline, other than that it was filled with the songs of ABBA, I was pleasantly surprised with this fun, light hearted musical. I followed the story to the silver screen which starred Hollywood heavy weights Meryl Streep, Colin Firth, and the unforgettable Pierce Brosnan. I will always remember the audible gasps in the cinema when Pierce Brosnan started to sing his first ABBA hit! Despite this, it went on to become the highest grossing movie musical worldwide. Well here I go again, but this time it’s to see the musical back on stage, returning to Australia to celebrate 10 years since it debuted on London’s West End.

If by chance you have not yet seen MAMMA MIA!, it is a story of family and friendship. It takes place in a Greek Island paradise and follows 20 year old Sophie (Suzie Mathers) and her quest to find her real father before tying the knot with her sweetheart Sky (David Sommerville). With three possible fathers from her mother’s past, the audience are taken on an enjoyable journey wondering who the real father is.

Reuniting for this 10th Anniversary tour are members of the original Australian cast. Annie Wood is back to reprise the role of mother Donna Sheridan along with Jennifer Vuletic and Lara Mulcahy as her best friends Tanya and Rosie. This formidable comedic trio creates magic on stage belting out popular ABBA songs in funky 70’s inspired costumes, flares and all!

In her first professional leading role, Suzie Mathers is delightful as young Sophie alongside the charming David Sommerville as her fiancé Sky. They perform against a very minimalist set design that includes a featured Grecian white wall which rotates on set. The Mediterranean location is cleverly brought to life with the use of blue lighting and costumes in various shades of blue.

The genius of MAMMA MIA! can be found in writer Catherine Johnson’s creation of an interesting and cohesive storyline around existing songs by the hit machine ABBA. The nostalgia of popular songs such as ‘Dancing Queen’, ‘The Winner Takes It All’, ‘Money, Money, Money’ and of course ‘Mamma Mia’ had the audience singing along in their seats. From a heartfelt ballad to an upbeat disco song, each ABBA tune has a purpose in building the story of this romantic comedy, even though at times it can be a little forced.

Every musical has a dream sequence and MAMMA MIA! does not disappoint. In this memorable dance scene it brings to life an explosion of colour where the dancers are covered in florescent yellow and orange scuba diving gear and perform a dance sequence in hard to move flippers.

When a musical has as many hits songs as MAMMA MIA!, there is no better way to end the show than with a medley of ABBA’s greatest hits. This had both young and old on their feet and in the aisles singing and clapping along.

Make sure you see MAMMA MIA! before it goes again! It is here for a strictly limited season in Sydney, Melbourne, Perth and Brisbane. The show is also touring the US, Spain and Germany in 2010. For more details visit www.mamma-mia.com