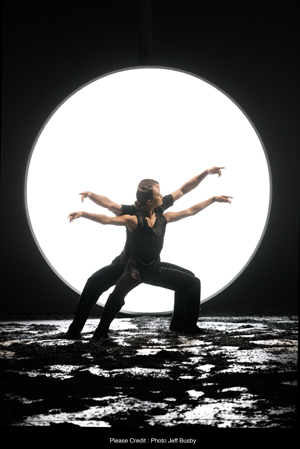 Mercury is the Australian choreographic premiere for Kenneth Kvarnstrom, one of Europe’s dance success stories. Opening in Sydney in November the contemporary performance has been deservedly well received by audiences.

The work came from many varied inspirations ranging from the Roman God ‘Mercury’, mercury as an element and the planet Mercury, evolving into a show lasting a little over an hour.

The show opened with dancer Richard Cilli with his back to the audience and crouched down. He made intriguing, particularly small movements showing every single muscle in his toned back.  The other dancers eventually joined in with the groupings constantly changing but the choreography remaining the same. The dancers were so in tune with one another, their unison was faultless. The interesting movement had almost a Tai Chi quality to it. This beginning section gave us a taste of much of the choreography that we would later see throughout the work with several repeated motifs.

The set and lighting design was created by Jens Sethzman who has worked with Kvarnstrom on numerous occasions. The stage was a stark white with no real wings, only tiny entrances at far up and down stage, making it feel like the dancers were in a large room. From the ceiling hung a large circle that was lit in many different ways and the effects created a fantastic complete look overall. Against the stark white the dancers were dressed in all black. The lighting just set off the work and showed Sethzman’s great skill. At one stage extreme white light shone toward the audience making it feel like we were looking at the sun with the planet Mercury between us and its radiance.

There were many standout moments. The triple pas de deux was one of these. It was very contrasting in mood from the opening and was fun and flirtatious. With quick movements it displayed some interesting partner work and the female dancers used their expression well.  I particularly enjoyed the creativity that abounded from the simple movement of one dancer pushing another at the knees. This was a clever motif that kept reappearing, but was used in many different ways.

Another particularly memorable moment was in the last section were one dancer stood centre stage with a large metal pipe, and a mass of black feathers, appearing like black snow, fell from the ceiling. The dancer began to create a circle with the pipe and the sound was amplified, creating a hollow spinning noise.  Three male artists entered dancing in what seemed like feathered pants, looking slightly animalistic. The other dancers entered and moved through the black mess on the floor making a fabulous effect.

Throughout the piece there was an underlying sexual tension between the male and female dancers but in a mature and elegant manner, with often very playful moments as the dancers interacted. There were also times where the choreography made the dancers quite androgynous as the movement was not exclusive to the male or female dancer. The females were lifting the males and at times there was partner work happening and a single dancer also doing the exact same choreography, but on their own. This was quite unique and entertaining.

Mercury was an intriguing work. One could see the choreographer’s inspiration not in a loud way, but rather in a subtle manner. Kvarnstrom’s choreography had a maze of motifs and repetition with a definite but intricate formula, which I found pleasing to the eye. The dancers performed the choreography with ease and excellence. Mercury is yet another win for the talented Sydney Dance Company!