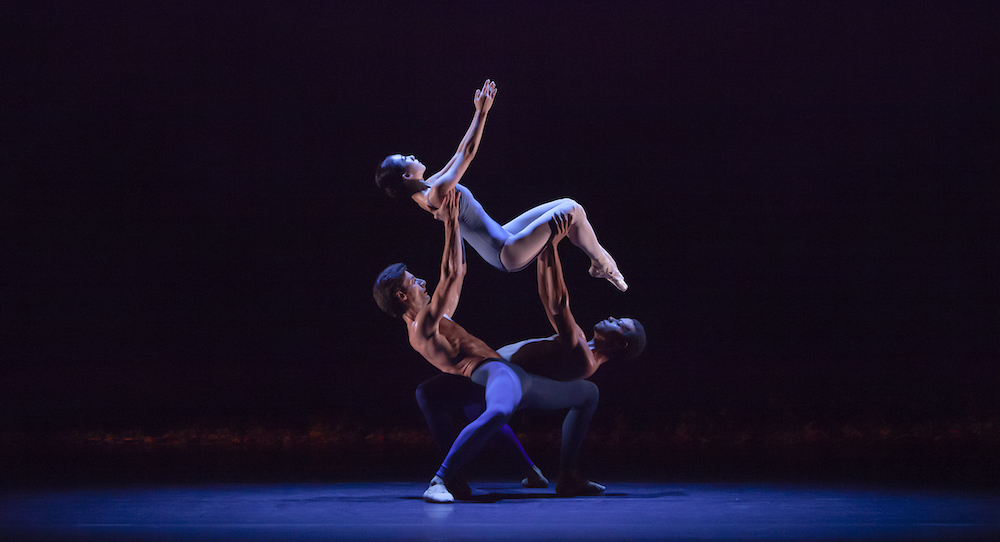 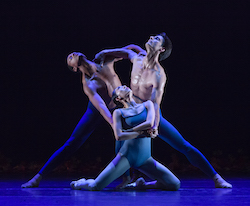 The night’s opening piece comprised of six dancers, Kylián’s Return to a Strange Land, was dedicated to the late John Cranko – one of Kylián’s mentors and former Stuttgart Ballet artistic director – who met an untimely death from a heart attack at just 45 years old. The piece was choreographed when Kylián and peers returned to the studio without their artistic director. It was gut-wrenching watching this piece, knowing Kylián choreographed Return to a Strange Land about something so real, and not abstract at all. 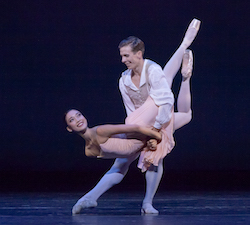 Jessica He and Ivan Tarakanov. Photo by Kim Kenney.

The choreography consisted of moments of support, counterbalance, intriguing transitions and collapse. Of all six company members who performed a variety of duets and trios, the dancer who caught my eye most was Keith Reeves. His tall, gliding movements were distinct and elongated, accentuating the piece’s difficult subject matter and, at the same time, seamless movement.

There were strange pictures formed between several sweeping lifts and repeating shapes, and I felt as though I was on a journey with Kylián — one that I did not particularly want to be on because of the emotional toll. I appreciated the dancing from all involved but felt as though the acting waned in times when it needed to be more obvious. I do appreciate, however, subtlety in performance quality. Perhaps why Atlanta Ballet chose to preface the performance with an emotional statement from Assistant to the Choreographer, Jeanne Solan, about the piece’s meaning.

We were then shown wonderful showmanship through Balanchine’s Tschaikovsky Pas De Deux, performed by newer members of Atlanta Ballet — Jessica He and Ivan Tarakanov. His light, springy performance shined, and Tarakanov’s technique and effortlessness reached the back of the house. The dynamic duo were a perfect pair to shed light on the quick, intricate footwork of a classic Balanchine piece.

An exhilarating moment came next in the way of two special guest artists from the Czech National Ballet — dancers Miho Ogimoto and Michal Štípa. The two performed a romantically dark duet entitled Vertigo, choreographed by Mauro Bigonzetti. The duo shifted in and out of the light and dark in couter-balanced, tense partnering, with creative lighting design by Carlo Cerri. The seasoned dancers were steady, grounded and had no hesitation toward investing the necessary focus toward a piece like Vertigo. A focus that is difficult to master, but easy to learn from. I thoroughly enjoyed seeing these two performers interspersed with Atlanta Ballet’s growing talent. 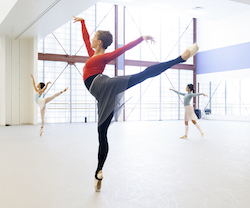 The fourth piece in the mixed repertory program was the classical Act III Pas de Deux from Don Quixtote. Performed marvelously by second-year company members Jessica Assef and Nikolas Gaifullin, the pas de deux was acted well with a certain confidence necessary for Don Q. The two dancers had a flirty, rambunctious nature throughout, and I was mystified by Assef’s long lines and by Gaifullin’s height when jumping. They were quite enjoyable to watch.

The final piece of the evening, The Premiere, was a world premiere from choreographer Ricardo Amarante. Comprised of almost all of the Atlanta Ballet company members, The Premiere took us through three stages — on a journey from conception to performance — a class, the  rehearsal process and the premiere. Stand-outs Nadia Mara and Jackie Nash brought a certain hilarity to the behind-the-scenes (maybe a tad exaggerated) look at what ballet dancers go through on a personal level when in the process of creating a piece. 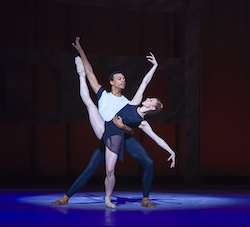 The quick, syncopated movements, the short vignettes, along with the story-focused performance from all dancers involved, made this piece engaging and fun to watch. I could extrapolate memories from my own dance background and past rehearsals to relate to the piece, and that made me laugh and feel proud all at the same time.

I greatly appreciated Return to Fall as a whole program. There were moments of profound clarity and times when I recognized the hard work behind the sweeping, beautiful movements. I feel as though the Atlanta Ballet is heading in the right direction and things seem to just be…falling…into place at the beginning of what is most likely going to be an incredible season.