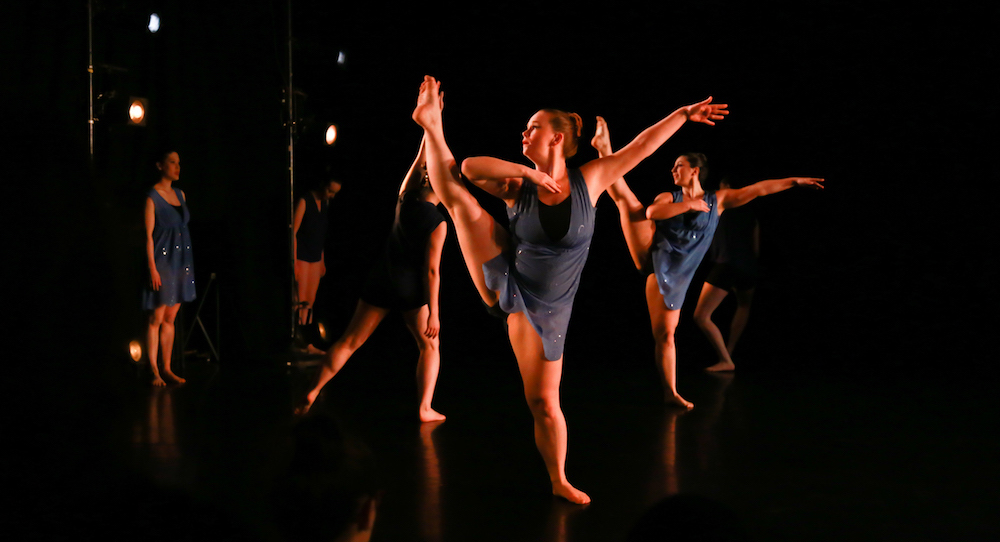 Some of dance training, and dance itself, is about integration – separate parts working together to achieve a certain aim. Fundamentally, that’s about connection. Some of it is about isolation – literal isolations on a physical level, and one part standing apart from others in a wider artistic view. This is one more way that the art of dance can reflect life itself – sometimes we connect, and at other times we disconnect (in both training and art, for good or ill in separate circumstances).

The theme of this duality seemed to naturally follow from the connective thread in Lacey Sasso and Company’s Deeply Rooted; Sasso explained in a pre-show statement how all of the works in the show (some of her company, with her choreography, and others from guest artists) connected with the theme of attachment. Taken broadly, that theme can apply to conditions such as addiction and deep romance. Over-investment in these things, often resulting from attachment to them, can lead to disconnection from other things in one’s life. 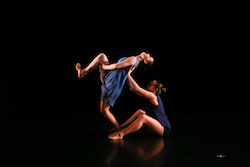 Sasso and Company’s ‘My Fragmented Chaos’. Photo by Olivia Blaisdell.

Fittingly, Sasso also described her company’s mission to connect disparate artists and companies in Boston’s dance community. They kicked off the show with “My Fragmented Chaos”. Pedestrian movement, of simple (yet poised) walking, turned into technical and powerful phrase-work. Low fan kicks turned into other turns with one raised bent knee. Dancers began to individualize the phrase, such as with turning battements in seconde versus sweeping fan kick. Moments of connection came with lifts and weight sharing. Dancers executed sweeping extensions while moving over the backs of partners.

The music changed to a more tribal beat, and some movement became more angular (such as through initiating with elbows and knees). Dancers crossed their thighs in handstands, simultaneously offering grace and power. Those moments of connection dissipated, until all dancers but one exited the stage. She lay on her side, as if sleeping. Was this her dream of the isolation she sees becoming genuine connection with others? A fun thing about witnessing such performances can actually be such guessing, proposing, wondering – but never truly knowing.

A solo from Sasso came third in the night’s program, “Consummate Love”. She began on her side, tracing with her finger as if drawing in the air. It’s as if she was drawing an object, person, or place of her desires. She slid to sit with gorgeous ease, then came to stand. She moved mostly in linear paths, in phrase-work more about her strong presence and grace than about virtuosity. That she did offer at certain times, however, such as with swooping to catch her elbow to then turn, leap, and fall to the floor. Her speed was also impressive, at a pure movement level. 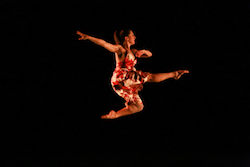 As striking as that was, artistically speaking, more ebb-and-flow – moments of pause and slower movement – might have allowed the wonder that she was offering to resonate more.

Towards the end, she came back to her side and drew with her finger again (which she did at certain points throughout the work, perhaps where she could find some of those moments of slower movement). This time however, she got up – strong, resolute, facing the back wall with feet wide and legs strongly grounded. She would make her vision a reality!

In the second act, Erin McNulty danced “Headlines”. Simple lighting lit her wearing a tank top and army green stretchy pants, all establishing a minimalist aesthetic. No frills, just McNulty – her breath, her movement, and her intensity. Her movement began in that minimalist feel, pedestrian walking with joint-initiated accents. Then technical feats came, just as fiercely and unexpectedly as her accents of simple gestures.

Grounding in the earth met strong, proud spinal length to captivate us. Feats of flexibility, such as backbending from standing, captivated us just as much. Other qualities came, such as a light and graceful attitude turn. McNulty was connected and assured enough within herself that separate qualities could be connected within her. She ended in a stance conveying all of this strength, assurance, and integration. 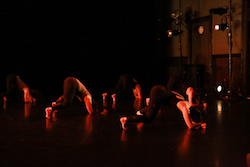 After McNulty came “Giving Up on You”, from choreographer Colleen Roddy and danced by an ensemble. Lines moved into three groups. Some dancers moved back-to-back, some executing lifts from that orientation. There was a sense of purposeful disconnecting, yet also at other times one of “I got your back.” Another memorable lift was dancers extending limbs supported only from a partner’s strong, grounded thigh. Individual moving pictures like these were within the striking overall stage pictures of cleverly shaped formations.

With a song change, Billie Holiday’s iconic voice underlaid movement of even further connection, even hugs – in two pairs and a trio “group hug”. Pedestrian and more technical movement was smoothly interwoven. As the piece drew to close, the dancers again came to their delineated, separated lines. Moving betwixt connection and disconnection – one could argue that it’s the natural human state. Though at times we want it to be, it’s not always as easy as “giving up” up on each other. For better or for worse, something always draws us back. Roddy’s piece spoke to all of this with grace and wit.

Sasso and Company returned to close the show with “Deeply Rooted” – a work-in-progress, the program noted. An earth-tone aesthetic matched, yes, “deeply rooted” earthy movement. Gesture, such as flexing of two hands and a foot consecutively, brought an animalistic feel – like an animating of paws and claws. There was also the clever formation shaping and shifts that Sasso offered in prior ensemble pieces. 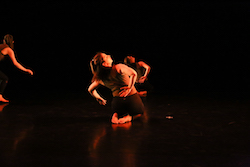 The dancers executed all of this with clarity and strength. It all seemed polished beyond being a “work-in-progress”, yet the ending could have used development. It felt like lights going down on a slight dissolving of stage action. Nevertheless, the work demonstrated another aspect of attachment, a larger idea on which the show was based – that of grounding in our “animal instincts”. That’s something disparaged in our culture, yet is something that can root us in our truest, most natural selves.

It’s all far more complicated than “good” or “bad”. Deeply Rooted, as a performance that spoke to this complexity, answering some questions and posing others to remain unanswered. The best art can accomplish that – asserting itself in a truth, yet not claiming to know all there is to know. That would be a negative fruit of attachment. Framed in skillfully crafted, powerful dancing, it was all quite a pleasure to behold.