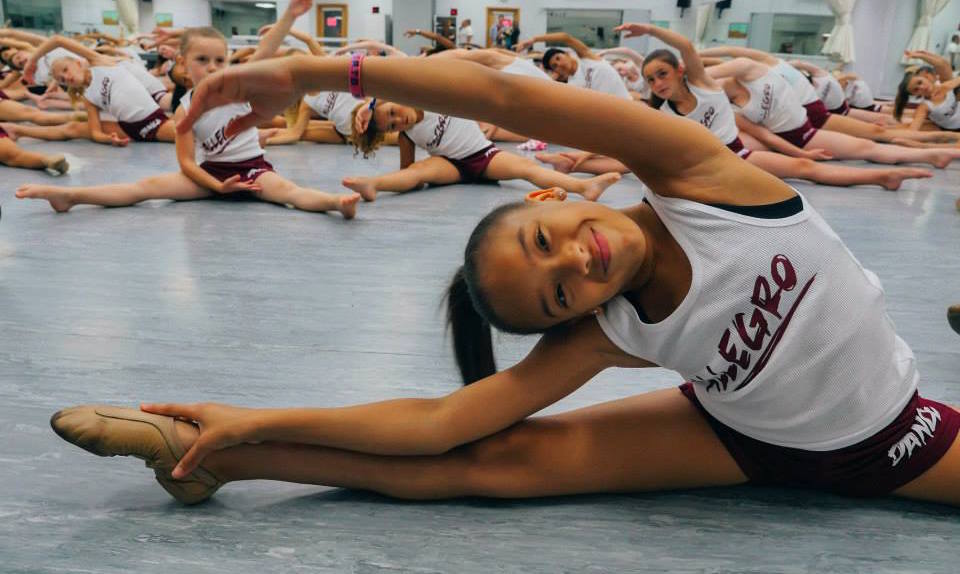 Several elite protégés at PULSE dance convention, numerous awards, and a win for Best Musical Theatre number at this past August’s Industry Dance Awards (for the third year in a row). That smells like success. So how does one studio do it?

“From the beginning, it was really important to us that we train equally in all styles,” Goodwillie remarks. “And as much as people fought us on that, it’s really proven to be a great part of our dancers’ training that are doing so well now. They’re not only tapping and doing great as tap dancers but also hip hop and musical theatre. So the versatility has been a really big part of our success over the past 10 years.”

“And then also just bringing in choreographers from the industry and always staying new,” adds Miles-Brooks.

Some of Allegro’s guest choreographers have included Emmy-winning Tessandra Chavez, top performer Gina Starbuck, So You Think You Can Dance’s Abe Obayomi, commercial dancer and choreographer Seth Zibalese and more.

As leaders, Goodwillie and Miles-Brooks encourage their studio’s staff to continue to learn and attend teacher workshops, in an effort to stay on top of the industry and to impart the best knowledge to their students.

“I think, as teachers, we feel pressure because we have such great dancers, and we have such great kids who are coming up, young dancers who are coming up, too, that we want to keep doing the best for them, and continue to provide them with everything that we possibly can,” Goodwillie explains. “And dance is an art form. It is constantly changing, so we can’t be stagnant. We have to constantly thrive to be better ourselves. So whatever we can do to better ourselves as teachers is going to better our students in the long run. So, it’s really important.” 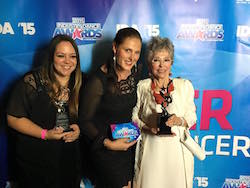 “I think it’s all about communication,” Miles-Brooks adds. “A lot of studios, they bring people in, they kind of do their job, and they leave. I feel like we have this system, and we’re constantly together, constantly brainstorming, constantly thinking of what we can do collaboratively.”

Allegro’s group of teachers are equally invested in their students and even offer as mentors. Perhaps it is this sense of “team” that has also trickled down to the student’s own desire to progress.

“No one did that for me growing up,” Goodwillie adds. “I didn’t have that at all – the opportunity to explore what’s after high school. No one sat me down and talked about, ‘Well there’s this college, and you don’t have to go to college right away, there are all these other options.’ I didn’t know anything about the industry and agents. I had no idea. So it’s great for the kids to kind of get a feel of that. And then they can make a better, well-educated decision about what they want to do.” 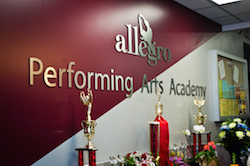 Allegro’s most recent big win, the award for Best Musical Theatre number at August’s Industry Dance Awards, actually came as a pleasant surprise. The studio’s number was choreographed by Eddie Strachan for the third year in a row, and still Allegro proved to be on top.

“I actually came into this going, ‘There’s no way we’re going to get it a third year in a row,’” Goodwillie comments. “There were some really great other musical theatre pieces. Three other teachers came with us, and we’ve been having a really good time, and this is just a really cool event, so we’re just like, ‘Let’s celebrate and enjoy it. And whatever happens, happens.’ If you put the numbers together of how many competition pieces were nominated – there were eight categories, six to seven in each category, and those 50 numbers were chosen from thousands of group numbers. So just to be a nominee is really cool, too.”

And there, Goodwillie possibly suggests one more secret to Allegro’s success: a good, positive attitude and respect for others in the industry. Bravo, Allegro Performing Arts Academy.

By Laura Di Orio and Deborah Searle of Dance Informa.