Saying Twyla Tharp is a legend in the dance world is an understatement. With more than 160 works and a string of accolades under her belt, she has been, and continues to be, a force in contemporary dance, as productive and uncompromising as ever after five decades of dance making. As I followed the stream of people into the Eisenhower Theater, I was thrilled to be there for the opening night of her 50th Anniversary Tour here in D.C. It was a packed house; everyone around seemed just as excited as me to see what would unfold.

The program featured two premieres, Preludes and Fugues and Yowzie, with not a single bit of her iconic repertory in sight. Tharp decided to mark 50 years of work by doing exactly what she enjoys most — making dances and keeping people guessing — and we were all delighted to be there to witness the result.

The program began with First Fanfare, an exuberant prologue to the Preludes and Fugues, set to the majestic music of John Zorn’s Antiphonal Fanfare for the Great Hall. With the first blast of the trumpet, two male dancers dressed in beige with a flash of a gold leapt onto the stage with the power and bravado of a pair of Russian folk dancers. This dynamic duo was soon joined by a full fleet of similarly impressive men in beige bounding and spinning across the stage. They were accompanied by an line-up of svelte women wearing broad smiles and majorette-style dresses in deep jewel tones. The whole thing was bombastic and yet strangely inviting like the start of a parade, regal and ridiculous at the same time. Like myself, the audience around me seemed to relish both the precision of the dancers’ classical lines as well as their unwavering enthusiasm as contagious as any Radio City Rockette. 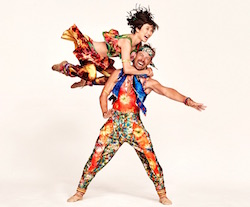 Then, after a very brief pause, the music of Johann Sebastian Bach filled the space marking the proper beginning of Preludes and Fugues, and the entire company slowly reappeared dressed just as before but with a more somber manner about them. Coming into this show, I was prepared to walk out just marveling at what a masterful genius Tharp is and relishing the opportunity to witness her incredible gift first-hand. As this piece unfolded, I had to admit that I was not in love with it, and then eventually come to grips with the fact that I found it as tedious as it was beautiful. In the program notes, Tharp introduces the evening by saying, “Simply put, Preludes and Fugues is the world as it ought to be, Yowzie as it is. The Fanfares celebrate both.” If this is the world as it ought to be, I am grateful to be confined to living in this messy, fascinating world as it is. Every movement was more lovely and perfect than the one preceding it, and yet, with the exception of a few sections, the whole exercise felt largely hollow to me.

Somewhere in the middle of this sprawling, almost neo-classical work, I did fall in love with the petite powerhouses of Reed Tankersley and Amy Ruggerio. They performed an athletic little number which seemed to take place entirely on an invisible trampoline. This movement was Tharp magic for me, showcasing her knack for taking something as simple as bouncing and crafting it into a comedic tour de force. The deceptively simple movement demanded full commitment, both physically and dramatically, from the dancers, and it was fun to see Tankersley and Ruggerio rise to the challenge.

At least some of my struggle to enjoy this piece stemmed from the fact that some of the other dancers in the company weren’t as convincing and seemed unsure of what kind of world they were inhabiting: were they in a ballet company, vaudeville troupe or Graham tragedy? Tharp’s world is a little of all of that, and not all the dancers seemed comfortable with the ambiguity. They were tossing off pirouettes and brisé volé with ease but seemed awkward shifting into pedestrian movement and insincere in the more dramatic moments. Tharp’s work has always demanded the physicality of an athlete and the showmanship of a Broadway star, and some of the members of this company just couldn’t seem to blend the converging idioms in a way that was believable despite their impressive technical prowess.

In the end, Tharp did deliver a satisfyingly hypnotic movement to close the work. It featured the full company in male-female pairs performing alternately classical and quasi-Latin ballroom style in a circular pattern. Choreographically, it was one of the simplest conceits of the evening and yet among the most visually striking and emotionally resonant of the whole program. The dancers channeled that cool sexiness which I recall seeing in old videos of Tharp performing her own work and finally coalesced into a cohesive company as they circled, swayed and undulated in each other’s arms. It was a cathartic moment in an otherwise uneven piece, and it helped me reengage with the company just as the first act was coming to a close.

After the intermission, the curtain rose to reveal a translucent scrim, backlit in a warm red hue, and thus began the Second Fanfare set to John Zorn’s triumphant In Excelsis. The dancers turned, tumbled and posed in stunning silhouette in front of and behind the curtain for the duration of the fanfare. The star of this section was James F. Ingalls’ stunning lighting, which had been perfect all night, but took centerstage here as it evoked the opening of a sweeping Broadway-style production using nothing but light and shadow. For me, this was the highlight of the evening. Every movement seemed essential and iconic as the dancers progressed across the stage in an ever-evolving kinetic relief sculpture. The restraint and theatricality of this moment was intriguing; I could feel the whole audience leaning in with anticipation. 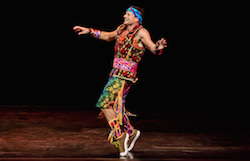 When the fanfare ended, the stage exploded with light, color and movement as the company cut across the stage in duets, trios and small groups, which deftly communicated who belonged to whom in this fantastical world. It was soon evident that veteran Tharp dancer, Rika Okamoto, was the heroine of Yowzie, with Matthew Dibble portraying her odd love interest and the rest of company serving as supporting characters in this strange tragicomedy.

Revealed in full lighting, the costumes of Yowzie, as created by Santo Loquasto, were as hideous as they were brilliant. Individually, each costume was more garish than the next, and the dancers looked something like 80s jazzercise instructors living on the streets in a post-apocalyptic future; yet, as a whole, this riot of color and pattern was appropriately as jarring and electric as the choreography itself.  Most importantly, the costumes masterfully defined the characters and their status in this weird little world devoid of any other stage business except an expansive backdrop that was itself an ecstasy of color and texture. Like the backdrop and the costumes, this was a world lacking in subtlety that celebrated excess with a complicated mosaic of movement and bizarre bits of theater like Okamoto’s turn acting like a baboon after her lover takes up with a trio of men.

Tharp has a reputation for being unrelenting in her personal life, and her choreography has always seemed to subscribe to the more-is-more, and even-more-is-even-more theory. She throws it all into Yowzie like it is the proverbial kitchen sink with the petite allegro of ballet co-habitating with Elvis-like hip-gyrating, chorus girl kicks and a stream of quirky, post-modern pedestrian nonsense. When this crazy cocktail works, it is intoxicating, sort of addictive; you want more and more of it.

Okamoto is completely convincing as the half-crazed, yet almost child-like, woman scorned at the center of this drama, which is impressive given she is among the two most senior dancers on stage. Her lines aren’t always as crisp and feet as laser pointed as the younger dancers, but you don’t care because she possesses that certain brand of contained wildness that is Tharp’s signature. With her in lead, the rest of the company seemed to find their way as well, with every dancer on the stage performing with both technical bravado and a convincing sense of their character’s unique perspective.

However, I did finally hit the super-saturation point about 15 minutes before the piece found its final conclusion. At that point, I could hear my college composition teacher asking, “You found your ending 15 minutes ago. Why are they still dancing?” One answer could be for the joy of it. The dancers certainly did seem to be having a great time, which is no easy feat going into hour two of virtuosic dancing. But I know wasn’t alone when I thought the piece was ending three times before it actually did. I could sense the audience letting out a collective sigh, only to be surprised when the lights flashed back up and dancers exploded onto the stage again.

By the time the piece actually ended, I felt guilty, but I was just incredibly relieved it was over when just minutes earlier I hadn’t wanted it to end. Maybe that was Tharp’s point. If Yowzie is our world today, as it is, then maybe it was just right, given that we live a constantly chattering, hyperconnected culture where nothing ever seems to end. Our love affairs and strange behaviors are constantly on display online even when we have moved on offline. And if that’s her take on things, she isn’t wrong. But I was already completely disenchanted with that reality, and I retreat to the theater for a respite from the meaninglessness of that constant noise. In any case, I preferred the first of the three endings, but it is Tharp’s world and she calls the shots. Of course, we all stuck around until the end to see where she would take us. With Tharp, it is always a bit of surprise where she lands, and I am sure she will keep us guessing for years to come.