When I was younger I grew up dancing at a school that used ballet class music from CDs.  The songs became intimately familiar, every track memorized, and every song seeming to fit just right to the steps our teacher had set.  Of course I wondered how the artistic director for that album chose the music, but it seemed like they must choose from an endless list of perfect songs adapted from the old musicals or older classics.  When I grew older and took my regular classes with live accompaniment, I realized that the success of the combination or even the whole class could ride on the choices of the pianist, and I wondered regularly just how they accomplished that symbiosis between step and note.

To find out more, I spoke with one of my current favorite class pianists, Patrick Gallagher. Patrick is young compared to most of the accompanists I have known, but he is also one of the few who when I see him in class I know it’s going to be a good one.  Originally from Ohio, Patrick won first prize at the Buckeye State Piano Auditions at age 16, and moved to New York to attend Sarah Lawrence College, where he studied both music and dance.  This combined artistic background gives him a unique insight into the musical demands of class.

Patrick did not specifically study accompaniment, but his mentor, André Gribou, “was also a dance musician so I think that, although I didn’t study accompanying intensely with him, I absorbed some of his techniques,” he shares.  Patrick came to pursue this in college.  “I began accompanying dance because it was a combination of my two passions, the two threads of my artistic life. I actually started dancing before playing the piano, then had very strong piano instruction. At Sarah Lawrence College we didn’t have majors so I was able to study both essentially equivalently. I did choreography and composition, performed classic post modern works (e.g. Yvonne Rainer), and spent a lot of time investigating the tradition of post modern dance that comes out of Judson Church. I do gravitate toward ballet teachers who have a strong somatic understanding and musicality.” 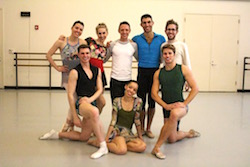 And how exactly do the teacher and accompanist work together?  “It’s a very complex dynamic, like a date! It’s an unusual situation where two relative strangers are asked to spontaneously collaborate and, with that, comes a lot of surprises!” But he explains that it is a balancing act since the teacher creates steps and the pianist has to work, sometimes quite hard, to make it happen. “The teacher is running the show. My main aim is to please the teacher because it’s still their class, and at the same time I have my own ideas about what I want the class to sound like. It’s a balance.”

As the dancer, you might assume everything is figured out very easily but, because of this dynamic where both the teacher and the pianist wield great power while the teacher outwardly controls the class, there is also the potential for conflict. “It’s a particularly fraught situation,” he explains, “because both participants are making themselves vulnerable and someone’s ego can be bruised.  I try to make every teacher feel comfortable in that they can ask me to change something; I’m always open to communicate. Sometimes you just have to take a blind stab at what you think will work best, and often it works just fine. The teacher doesn’t tell you what to play! You’re lucky if you get any instruction so specific as that it’s a 2/4 vs 3/4. It’s not as if there are only one or two pieces to play for a specific exercise. Rather, the choices are endless and a lot of the decisions I am making are split second. Improvisation is a hugely useful tool.“

So, how does Patrick actually choose what he is going to play?  It’s a grand combination of spontaneity informed by both knowledge of technique and life experience. “Each dance class is different so I have an open mind about what I’m going to play, but the most important things are to support the dancing rhythmically, dynamically, and to keep the energy of the class. For example, I’m often thinking about trying to have variation between pieces that are more somber and that have more vitality, striving for variation and musical interest. The musician has a responsibility – our music can make or break a class.”

“It’s an interesting field because you’re expected to have a certain degree of knowledge from the get-go, but there is very little formal training available and there is a steep learning curve.”

The music comes from Patrick’s vast knowledge of the western cannon as well as his own compositions. “Depending on the class, students, and teacher, I could be improvising up to 75% of the class,” he explains. “An extant piece of music will have to be altered to fit the phrasing of a ballet class, and that is one of the challenges for any accompanist. One way of getting around this is to improvise, so I have created improv scores that utilize certain chord progressions, melodies, or rhythmic devices. But within that structure there can be great freedom, and that is where my job becomes truly thrilling.” He tries to keep things fresh and not fall into patterns but if something works, he’ll keep it. 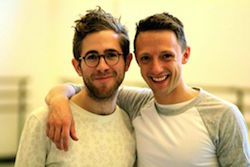 Patrick recently collaborated with celebrated teacher Matthew Powell on ‘Find Your Fifth,’ a DVD/CD set that was just released in June 2015. While I assumed it would be Powell making all of the decisions, Patrick was the one who actually chose most of the music. “It wasn’t totally carte blanche; the decision making was collective but I was given the task of selecting the music content. I knew the dance combination and meter, then chose.” And for the album, where spontaneity is not a big issue, did he use existing music or his own creations? “I did favor my own compositions mainly for practical reasons of copyright; we had to use music that was in the public domain or original.” But, even though everything was decided and recorded, Powell still demonstrated the combinations while he played for the recording, which was “both practical and inspiring because I pay attention to what the dancers are doing, which helps me support them dynamically. I also don’t actually count out the length of the combinations, which would be a lot of work to count out the bars, so I can just watch and know where to be in the music and know when to end.”

If you want to communicate better with an accompanist, whether as a teacher or dancer, here are a couple of things you should know!

Know rubato – this refers to slowing down to accommodate the dancers.  Be specific where in the combo you want it by saying something like, “during the pirouette, give us some rubato on the last count.” But don’t make the pianist accommodate the dancers all the time; it makes it hard to maintain the music’s integrity.

Know the difference between rhythm vs tempo – a lot of people use these interchangeably but rhythm refers to how the notes or steps are organized in time, while tempo refers to the speed at which they are performed.

Don’t say ‘a hair faster/slower’ – usually for a musician what the dancer wants is much more than the extremely small changes a musician is capable of, so just show the tempo you want!

Know the difference between duple vs triple – does the pulse have march like quality (duple) or a waltz like quality (triple)?  This is your basic meter.  Decide if you want more time (usually triple) or more urgency (usually duple) in the movement.

Do demonstrate with the accurate rhythm and desired tempo. If you mark the combination quickly, just make it clear to your musician what tempo you intend for the exercise.

And please thank your musician!

One final word on musicality from Patrick’s perspective: “The term musicality gets thrown around a lot but, how do we ‘be more musical?’ What does that mean?  I think what people are trying to say is they want the dancing, like the music, to be 3-dimensional, with dynamic shifts in tone, texture, and volume. There are parallels for the dancer: you can dance bigger, you can change the quality, you can take more time, etc. These elements make a dancer fun to watch, and these are the same elements that make a musician fun to listen to. There are these fundamental similarities, and we get too caught up in the language of how we talk about these things.”

Patrick’s latest project, “Find Your Fifth,” (Director Matthew Powell; Sound Engineer Lawrence Demartin) is an instructional class DVD and CD pairing that portrays a classic New York City ballet class. You can find out more about it at findyourfifth.com.