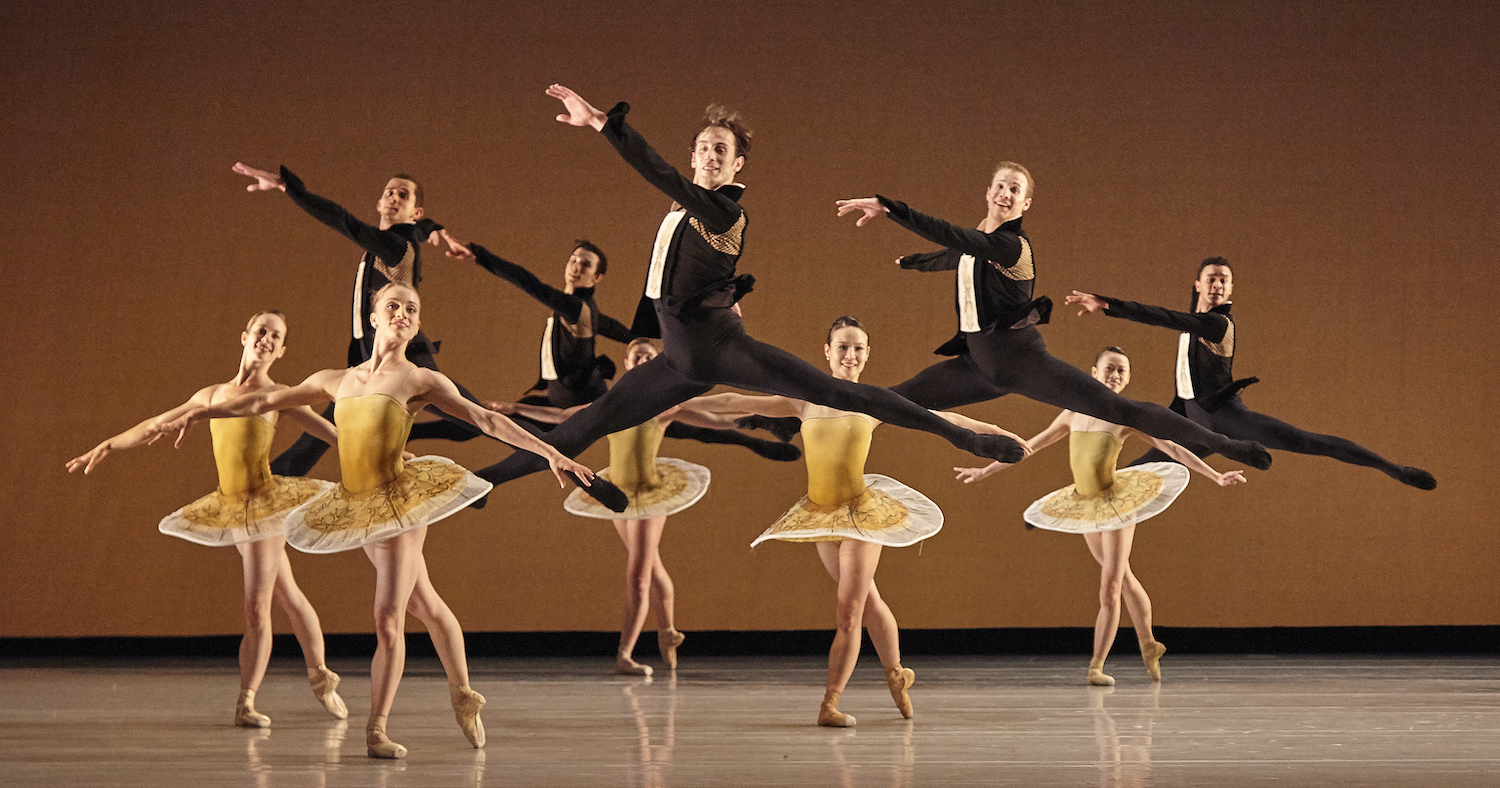 Atlanta Ballet closed its 85th season with MAYhem, a mixed bill showcasing three very different sides of this keen and willing company. Bringing in three renowned choreographers of dissimilar backgrounds, this company once again displayed its chops for works of assorted challenging styles.

First up was New York choreographer John Heginbotham’s amusing Angels’ Share, a sprightly work that was originally created last year for Atlanta Ballet’s summer troupe, Wabi Sabi. Since its first incarnation, the work has been expanded and further explored, giving this contemporary choreographer more time to discover his balletic voice.

In his program note, Heginbotham recounted how he stumbled upon the idea for the work, stating, “In 2014, I was midway through creating a new work for Wabi Sabi when the phenomenon of the angels’ share occurred to me. The angels’ share is the portion of liquid which evaporates into the ether when wine or whisky is involved. I was working with a group of predominately self-selected dancers, members of a uniformly excellent company, and to me they represented the angels’ share – an exquisite, intimate group.” 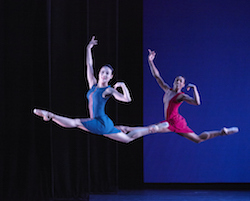 Heginbotham, fresh off winning the Jacob’s Pillow Dance Award last year, spends the majority of this time overseeing his own 7-member company in Brooklyn. His quirky and athletic style often reflects the influence of Mark Morris, the world-renowned choreographer that he danced and toured with for 14 years. His Angels’ Share mirrored Morris’ known musicality – with Artistic Director John McFall actually inviting String Trio to perform Heginbotham’s chosen music by Ernst (Ernö) live.

The five dancers – Kiara Felder, Yodmi Kim, Miguel Angel Montoya, Benjamin Stone and Jared Tan – all worked hard to achieve the movement, but on opening night there was a sense of anxiety in the air. Midway through the work, it felt like the dancers were sinking into the choreography and listening to the music more closely – finally coming into their own. Yoomi Kim and Kiara Felder shared a lovely pas de deux, which was an unusual treat for viewers since ballet typically doesn’t comprise the pairing of women. Jared Tan, a dancer in his fifth season with the company, finally received a noteworthy solo and his short frame seemed to meld perfectly with the robust jumps and sharp lines.

Throughout the work, the lighting designed by Nicole Pearce fluctuated in brightness. The first moment after the curtain rose was especially beautiful, as the hanging chords that clasped the industrial-style bulbs burned low and created a warm, quiet mood. As the work evolved, the lights would reflect, or sometimes even guide, the spirit of the movement. When the dancers pounced from the wings in a dash across the stage, the lights would blaze, while at other times the lights would glow with a calm radiance. The costumes reflected the music’s formality, but in an appealing way that wasn’t too pompous. It was witty that Heginbotham chose to purposefully flip the classic Balanchine look on the males – instead of a white T-shirt and black tights, it was a black T-shirt and white tights. Overall, it was clear why Atlanta Ballet marketed this piece as an “ethereal and uplifting work.”

Next on this mixed program was the explosive, fast-paced and technically-demanding work Classical Symphony, choreographed by Russian choreographer Yuri Possokhov. Whereas Heginbotham shyly experimented with pointe work in Angels’ Share, Possokhov completely and solely depended on it in his work, with ballerinas executing magnificent and impressive feats that caused the audience to erupt in applause and frequent gasps. 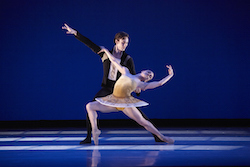 Possokhov, who previously danced with the Bolshoi Ballet for a decade and then the Royal Danish Theater, created this work in 2010 for his home company, San Francisco Ballet, who he performed with for 12 years at the end of his dancing career. In Atlanta Ballet’s preview video, Possokhov admitted that this is a hard work and one that caused the SFB dancers to probably want to curse him. When seeing all the lightening fast turns and extensive legwork, it’s no surprise.

Yet, this work was definitely a highlight of the program, presenting the evening’s standout star – Jackie Nash. Entering her fifth season with the company, Nash has often been passed over for some of the company’s larger roles, with characters like Juliet going to fellow dancer Alessa Rogers or other solos being given to the now-retired company veteran Christine Winkler. However, this program brought a turning point. Nash came into the spotlight and hopefully will never be asked to leave. Her gorgeous technique was nearly faultless and her charisma was unflinching. Partnered with the equally delightful Christian Clark, Nash spun, bent and leapt with a certain fearlessness that demands respect.

Nash’s brightness was matched by the burnt yellow contemporary tutus designed by Sandra Woodall, which were nicely offset by the male dancers’ black pants and jackets. Classical Symphony, set to Prokofiev’s work by the same name, elicited a standing ovation, which certainly would have made Peter Pestov proud, the Bolshoi Ballet Academy instructor to whom Possokhov dedicated the work to.

Following intermission came the final work, Swedish choreographer Alexander Ekman’s inventive Cacti. While this work is undoubtedly avant-garde, it doesn’t do it justice to simply leave it there in description. This piece is many things.

First, this piece is laugh-out-loud hilarious. With Cacti, Ekman uses his platform to criticize those who are often criticizing him – the dance critics of the world. He openly and mockingly pokes fun at what he dubs the “artsy-fartsy critic voice.” In his program note, and in the preview video Atlanta Ballet showed to introduce the work, Ekman explained it was inspired by hurtful and jarring criticism he received in his mid-20s as he was gaining prominence in the choreographic sphere. He felt on a deep level that it wasn’t fair and was often unnecessarily academic and snobby compared to the regular experiences of the common man. Addressing this, he used a voice over in Cacti to convey what he deems the elitist tones of a critic. In doing so, he points out how ridiculous it is that critics are always insistent upon a deeper symbolism and contextual meaning, often fabricating secret messages that aren’t really there.

While making viewers laugh with the ridiculousness of this, Ekman also manages to perplex them with his many intense thematic and cultural influences. The first is the ritualistic chanting, beating and slapping that happens in the first segment as 16 company dancers kneel on square wooden stands. Inspired by monks he observed in worship while traveling, the movements are accompanied by clapping, slapping, banging, heavy breathing and guttural screams. Four musicians roam the stage as the dancers exhibit a concerning angst.

Another element of this work, adding to the hilarity and angst, is the reverence towards meaninglessness. Throughout the work, as each section segues, there seems to be an undercurrent of existentialism. Relationships between dancers begin and evolve, with no apparent reason why. This was especially evident in the charming and brilliant duet performed by Nadia Mara and Heath Gill. They danced to a voice-over conversation (supposedly between them two, although their mouths never move) that details their relationship as it starts and stops in the midst of a rehearsal. Indisputably, this comes to climax when a cat (not real) falls onto the stage from above. It’s Ekman’s way of saying he can do that, and it doesn’t have to mean anything if he doesn’t want it to. Yet, interestingly, while Ekman exhibits obvious reverence towards meaninglessness in this work, he admits on his independent choreographic website that generally before he approaches a work he always asks himself why the piece is needed. This thinking seems to contradict his elevation of futility in Cacti – a work that seems to say no reason is needed to create; it’s about the process of creation itself that matters. 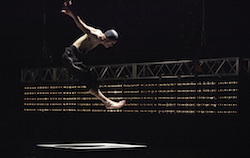 In general, this equally ritualistic and rebellious piece works hard to deconstruct the formal framework many expect in a concert setting, and it certainly succeeds. Playing upon clichés and pretenses, it refreshingly causes viewers and critics to question why we have the expectations that we do and why we always seek to paint a picture or explain away symbols. The hilarity of the movement and voice-overs, as well as the random cacti in the final section, bring a stimulating and refreshing relief that is needed in a contemporary dance world that often takes itself too seriously.

As the season closer, Atlanta Ballet’s MAYhem is a perfect model of all this bright company is capable of. Combining airy transcendence with classical brava with avant-garde exploration, MAYhem showcased why this troupe has become known for both its traditional, classical expertise as well as its proficiency with contemporary projects.