Four dancers in black t-shirts and trousers move across a video’s snow-white multiple screens. Their gestures are edited by the videographer so phrases converge, diverge, and metamorphose from counterpoint to unison and back again. The movement ranges from task-like simplicity to slapstick silliness and sweetly supportive partnering. Sensuality balances abstraction, and emotion balances intellect. It’s the dance video, Nothing Else, by U.S.-based Swiss artist Seline Baumgartner.

Premiered in Switzerland in 2014, Nothing Else had its first American showing in Troy, New York, in January 2015. Audience members walked around a three-channel installation at the Experimental Media and Performing Arts Center of Rensselaer Polytechnic Institute, which had commissioned the work. “The experience was as much sculpture as it was film or dance,” said Baumgartner.

The film’s four featured dancers are long-renowned: Jon Kinzel is a choreographer, and the others appeared with major, even legendary, companies: Meg Harper danced for Merce Cunningham and Lucinda Childs, Vicky Shick was with Trisha Brown, and Keith Sabado performed with Mark Morris and Mikhail Baryshnikov’s White Oak Dance Project.

Their age drew Baumgartner to them. All are over 45, and the oldest, Harper, is 71.

As they move, their longevity in dance imbues the video’s fresh modernity with physical and historical resonance. They are not just skilled performers. They’re heirs to the excitement and experimentation of the 1960s, ’70s and ’80s. In those years, Cunningham, Brown, Yvonne Rainer, Simone Forti, David Gordon, Douglas Dunn, Deborah Hay, Steve Paxton, James Waring, Remi Charlip, other participants in the Judson Dance Theater, and many more stripped dance down and built it up anew. The performers Baumgartner has chosen for her videos lived—and moved—through the transformations and bring this experience to the work.

Baumgartner’s work with older dancers got underway in 2012, when she was invited to make a new piece for a Swiss festival called La Jeunesse Est L’Art (Youth Is Art). The 30-something filmmaker had received numerous commissions in the United States and Europe, but this one inspired intriguing ideas. Dance, it occurred to her, worships at the altar of youth. What if she shot a film featuring older dancers? Would their physical limitations be interesting? How would she find the performers? 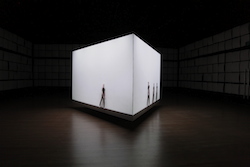 “I couldn’t advertise for older dancers,” Baumgartner recalled. “I didn’t know where or how to do it.” She consulted choreographer Elizabeth Streb, who introduced her to Harper.

“I met Seline for tea and liked her right away,” said Harper. “She’s focused and intelligent, but she also has a lightness and a sense of humor.”

After that, things developed quickly. Through Harper, Baumgartner found more dancers. It wasn’t all smooth sailing. “When we all met to rehearse, it was rough at first,” Baumgartner said. “I didn’t know anything about dance, which meant we didn’t have a shared language. So they’d show me things, and I’d figure out how to shoot and edit them.”

Soon, the group had a working vocabulary. “I threw myself totally into the work, and it felt good,” said Baumgartner. The video If it is as if it, completed for the 2012 commission, featured Harper, Shick, choreographer Sally Gross, and another Cunningham alum, Robert Swinton.

The project is ongoing. Baumgartner just completed Before the Future, shot on a sandy New York beach in winter. It uses the same cast as Nothing Else. Bundled-up dancers interact against a backdrop of rolling waves and ships that appear and disappear on the horizon. The gestures are tender and precise—surprisingly so, given the difficulty of dancing on sand and the thick coats, hats, and gloves.

Like Baumgartner’s other videos, the pace of Before the Future is languorous, luxuriating in the performers’ comings and goings. “I like long takes,” she said. “Sure, I could cut quickly, as you see in music videos or ads. But I like to let the action happen, let the dancer leave, then cut.”

Baumgartner’s videos may seem to be about dance. Not so, she said. “They’re really about the dancers.”

Dance Informa talked to Meg Harper, who appears in all three videos, about their creative process from the dancer’s perspective. Harper can fairly be called a dancer’s dancer, with fluidity balancing clarity in every movement, large or small, quick or slow. DI caught up with her during a break in rehearsals at North Carolina School of the Arts, where she was helping set Merce Cunningham’s 1975 Sounddance on students. In addition to performing for Cunningham from 1968 to 1977, she taught at his New York City studio, chairing the faculty from 1991 to 1998. She now teaches Qigong and makes and shows dances with Vicky Shick.

Seline’s work involves carefully constructed frameworks, such as split screens, clear-cut visual spaces, and, in some of the work, a nearly monochrome look. What structure did she give you for generating the movement in, for example, Nothing Else?

“The white wall that the movement had to occur along was our first limitation. Seline asked us to make crossings, as well as short solos and duets, and teach them to each other. Then she realized we could improvise with this vocabulary. So, we ended up with a lot of shared material. These became building blocks that she used in editing.”

Meg Harper and Keith Sabado in Seline Baumgartner’s video ‘Nothing Else’. Photo courtesy of Baumgartner.

The movement may be fodder for video editing, but it also has emotional richness and a sense of spirituality. How did that happen?

“It comes out of the dancers’ attention to physical detail. I think of my experience of dancing for Merce, which required paying very close attention to difficult and specific movement. Once, as we were about to go onstage in Rainforest, Merce leaned over and whispered that we were like people in a jungle. I tried to hold onto that image as I danced, but had to abandon it after a few minutes and concentrate on the dancing. For me, dancing for Merce was about becoming the movement. Just the physical doing.”

Do today’s dancers understand that?

“Nowadays dancers, including the students here at North Carolina School of the Arts, are so well trained, there’s rarely a problem setting his work on them. Sometimes ballet dancers have to be shown his use of the back, but they’re so eager for new experiences, again, there’s no issue; it’s not like the old days, when there was a split between modern dance and ballet.”

What advice do you give student dancers?

“We did some casting recently here and had to disappoint some. I tell young dancers in that situation to keep working. If you pay attention and learn as many parts as you can, things will open up. On the other hand, if you start to question whether you want to be a dancer, then you shouldn’t be one.”