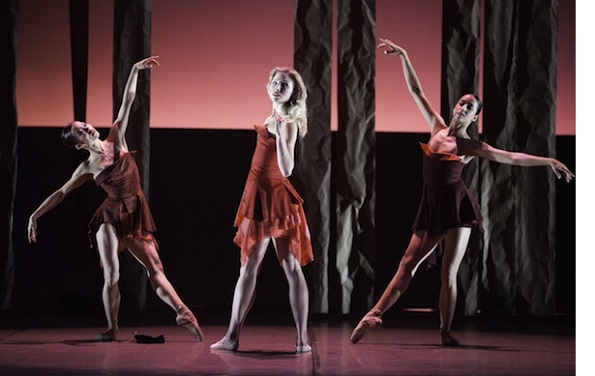 Atlanta Ballet started its 2013-14 Season with a fall tour to China – its first international company tour in more than 10 years – and ended it with a contemporary ballet tour-de-force, featuring two world premieres and the return of Jorma Elo’s 1st Flash.

Atlanta Ballet described the May mixed bill as a “no-holds-barred explosion of creativity and energy” and it didn’t miss the mark. The program was jam-packed with bold, kinetically heightened moments teeming with bright innovation and risk. The main company dancers shined in the program’s diverse choreography as a few select young dancers debuted in feature roles.

The Sunday afternoon matinee started off with Artistic Director John McFall’s first premiere in six years – Three. This ambitious and complex work, which was inspired by the many layers of dreams and the subconscious, featured 14 dancers, six of which were in character roles. Set to music by Alexander Scriabin, David Lang, Michael Gordon, Julia Wolfe, Radiohead and Steve Reich, the work spiraled and swirled between various duets, trios, solos and group scenes, fragmenting more and more into a hazy purgatory-esque reality – stuck between phases and unsure where one ended and another began. This was symbolized by the torn, separated pieces of curtain that lifted individually in order of the three stages of the subconscious.

As the intricate work continued to unravel, Three’s focus seemed to rest on one character played by fellowship dancer Stephanie Hall, identified in the program as the “Dreamer of Mind and Intelligence.” Hall, who stole the spotlight with her odd costume (she was in a unitard while the other “Dreamers” were in more feminine dresses), captivated with her irregular, jerky movements and long, lean limbs. After a memorable performance ending with her full physical transformation, I wouldn’t be surprised at all to see her featured in more meaty roles in the future. [Full disclosure: I once danced with her back in high school and can testify that her significant talent and gorgeous balletic lines drew attention and envy even then. She has been a star on the rise for some time.]

The second work on the program, The Exiled, was a world premiere by the company’s Resident Choreographer Helen Pickett. This work was by far the most intriguing to me, presenting a world where a “pension-stealing coward, a serial cheater and a mindless murderer are chosen by The Reckoners to spend eternity together,” as described by Pickett’s in-program note. Calling into question the basic principles of morality and fairness, The Reckoners, danced by Nadia Mara and Christian Clark, act as two vigilantes who exercise control over the criminals and serve justice as they see fit. 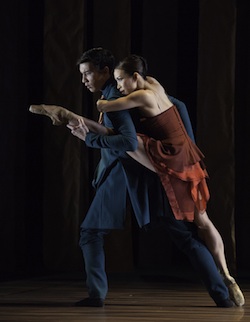 In addition to gorgeous choreography chockfull with breathtaking leaps and duets, the work utilizes other elements to bring this world to life, including a boxed-in set that confines the three prisoners and spoken narration performed by Clark and Mara. In particular, the use of spoken word was a wonderfully crafted tool in the hands of Pickett, drawing viewers farther into this otherworldly situation that revealed the truly ambiguous nature of good and evil.

As The Exiled progresses, the three prisoners – played by John Welker, Rachel Van Buskirk and Alessa Rogers – fight, seduce and attempt to escape to no success, ultimately coming to a place of demented acceptance. They shed their clothes like the layers of their pride, eventually exposing their inner natures and selfish motivations. The piece ends with no resolution, no neat wrap-up. And yet, somehow Pickett seems to perfectly achieve what she set out for – a work exposing the intricacies of human existence. If this is a foreshadowing of how she will approach next season’s full-length world premiere of Camino Real then audiences have something to look forward to.

Lastly, MAYhem closed with choreographer Jorma Elo’s non-narrative and abstract work 1st Flash. This was certainly a crowd favorite (and therefore, a smart move on McFall’s behalf) since most of the audience seemed to leave the theater impressed.

1st Flash showcased Atlanta Ballet dancers’ athleticism and precision while highlighting the company’s timeless class and sophistication. It was the perfect conclusion to a season demonstrating the company’s forward-thinking nature and simultaneous ability to preserve and protect the past. I’m looking forward to another season of world-class dance.

– Also of special note, this performance was the last for company dancer Abigail Tan-Gamino, who had been with Atlanta Ballet for four seasons. She performed in John McFall’s ‘Three.’