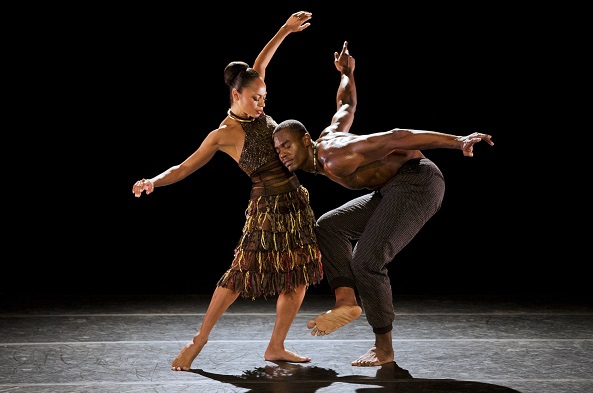 Last Saturday at New York City Center, Alvin Ailey American Dance Theater presented a matinee performance of their 2013 season. On the bill for this performance was Home, choreographed by Rennie Harris, Lift, by Aszure Barton, and of course, Revelations, by Alvin Ailey.

Home begins with the company huddled and posed center stage, silhouetted by the light. The audience sees a lone dancer reaching his hand upwards through the crowd, sometimes shaking the hand, sometimes waving it. Slowly, other dancers, dressed in hip but pedestrian clothing, begin offering up their limbs as well. A soloist begins clapping, dancing both for himself and reaching out towards the audience. The ensemble joins in and soon, the music takes the lead.

It is impossible to not enjoy these beautiful dancers as they groove, spin, and fly. The influence of hip hop is obvious and joyful to see from a cast of such strong performers. When the steady rhythmic nature of the piece begins to lag, a dancer catches your eye with a heartfelt gesture. Home is a celebration of dance and community at its finest.

Lift opens with three shirtless men in spotlight, standing statuesquely with their toned backs towards the audience. It must be a choreographer’s dream to set work on such a physically magnificent and able cast. Slowly, the lights begin to illuminate a long row of men upstage, facing the trio in the middle. The movement conveys something of an ominous ritual, something dark and tribal. Later, the women are introduced as something separate from the men, but all are equally powerful. Combining both large ensemble sections with solos, duets, and trios, it is the small, intimate moments that hold this expansive work together. At one point a duet between a man and woman ends with near maniacal laughter and spastic movements. Laughter from the audience came at exactly the right moment. 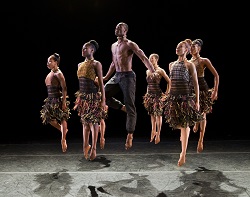 Especially notable is one duet in which a woman plants her face in the middle of a man’s chest for the entirety of a lengthy crossing from stage left to right. The couple twists and turns around each other, creating contorted lifts and shapes as they travel through space. The man appears to be the driving force while the woman stretches a long leg through his legs, wraps around his neck, and balances extravagantly. One has the sense of a long but private journey.

Revelations closes the program with gusto and feeling. A truly timeless piece, Revelations seems both dated and eternal at the same time. After witnessing this contemporary and talented cast strut their stuff in Home, I almost longed for them to break the mold of the bare-boned lines and shapes of Horton technique, and yet, that is where the dancers proved their strength. At no point was this more obvious than in Fix Me Jesus, a duet in which Briana Reed’s leg extensions earned gasps and applause from the audience. In Sinner Man, Jeroboam Bozeman, Sean A. Carmon, and Samuel Lee Roberts, prove their mettle with speed, guts, and heart-stopping turns. It is rare for an experienced dance audience member to be so thrilled by pure motion.

This work is loaded with history and meaning, but at no point is it unapproachable. The music of Wade in the Water and Rocka My Soul in the Bosom of Abraham is irresistible, and the cast rises to it. Ella Mitchell’s solo in the finale of Rocka My Soul… was truly ecstatic. If only all dance performers were so generous and free with their spirit.