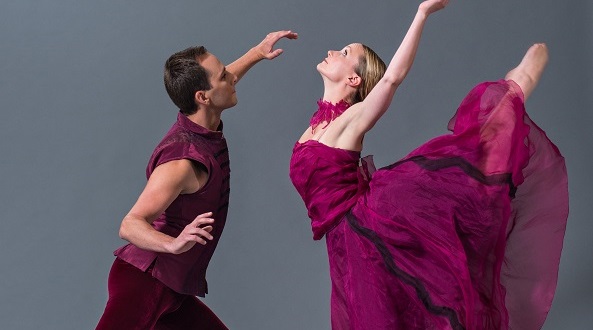 When you dance, do you think about who came before you?  Do you wonder why we use specific terminology, perform particular ballets year after year, wear certain things for class, or how one dance genre evolved into the next?  What about how these choices have shaped American culture?  Imagine, dancing amongst the images and memories of the most storied and prolific dancers, choreographers, and directors in American history, in one of the greatest historical, cultural, and social institutions of our country!  Now imagine creating the dance that upholds the significance of the people who made American Dance as we know it and shaped the face of America as a result.  You are imagining what Washington, DC-based choreographer Dana Tai Soon Burgess will do this next year through the first dance residency at the Smithsonian National Portrait Gallery’s “Dancing the Dream” exhibition. 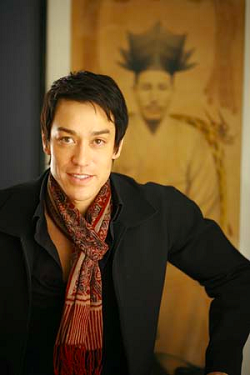 The Dana Tai Soon Dance Company, directed by Burgess, will be the first-ever dance company in residence at the Smithsonian during its first-ever look at dance in American history.  The exhibit runs from October 4th, 2013 through July 13th, 2014, with an amazing live dance aspect – in addition to the premiere performances of Burgess’s new work, the Company’s rehearsals on site at the Gallery will be open to the public and streamed live online on Saturdays in October, March, and April.

Burgess is in a particularly unique position to be the choreographer for this historic residency.  Not only has he choreographed more than 20 years of works that broach many sociocultural issues on a company of dancers who hail from all over the world, he has also served for 16 years as a US State Cultural Ambassador, taking his work abroad and sharing his ideas with audiences in a multitude of countries.  Burgess’s exploration of cultural identity feeds the exhibit’s exploration of dance and America’s identity over the past century.  I asked Burgess about his multi-part project and how his background and identity continue to shape his work.

Your work struck me as particularly human without being overly theatrical and very personal, having come from you as an individual rather than you as a step maker.  Are there certain attributes that you strive for in your work?

I strive to portray a sense of human vulnerability on stage; the inner thoughts about life and loss that bind us all together.  Even my most abstract dances hold portrayals of the human experience at their core.  I love the writings of Borges, Allende and all the Magical Realism authors, so I often create dances that have the presence of surreal images, events or characters.  Suddenly a character moves through a scene to remind the audience that there are larger questions or thoughts of the protagonists at hand.  I enjoy going from real-time to a fantasy, daydream sensibility and back again.

You clearly extract from having grown up in a Hispanic state (New Mexico, USA) with an Irish-American father and Korean-American mother, both of whom hailed from other disparate locations, to inform and shape your work.  This seems to be a very purposeful thing, that you do not just let your heritage influence you but instead you confront it, take advantage of it, present it to the audience, make us questions it, explore it… How much do those years growing up immersed in multiple cultures shape your works?

Growing up in multiple cultures is why I choreograph.  Somehow my childhood confusions pushed me to make a movement vocabulary that is my real voice.  I can communicate across borders and cultural differences through dance.  I grew up in NM but moved there from California when I [was] six years old.

I found myself suddenly immersed in a public, bilingual grade school (Spanish and English).  I don’t think I understood what was going on at school for about a year!  Everything was in Spanglish.  This time of cultural confusion, going from a traditional Latino community in the day to a Korean and American household after school really made me develop a deep interior world of daydreams and mental escapes. 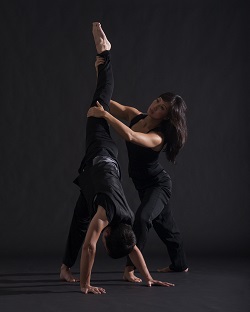 When I got home from school, my parents would let me wander away from the house in the desert where I had a box of lizards and horny toads I would play with.  I loved running and jumping and walking through this fantasy world that disappeared at sunset when I had to be home. As I became a teenager, it all got even more diverse!  I asked my parents if I could learn the piano, but instead they enrolled me in a Karate Dojo.  I loved these classes and would spend the evenings at a Dojo located in the Project Tibet Center off Canyon Road in Santa Fe.  I would often talk to the monks about Buddhism and far away places.  Ultimately all these diverse cultural dialogues and experiences have informed my aesthetic, the way I look at the world and continue to formulate connections between seemingly different cultures.  For me, dance is a universal language that connects us and is deeper than verbal and written language.

How is the Asian American Youth Program involved in your residency?

The kids are great.  They help in lots of ways.  One student is helping me research old interviews with dancers as well as musical scores that might be inspiring.  Another is putting together musical sections for me to listen to on GarageBand.  Others spend Saturdays at the Museum and help with taking notes, running sound and our UStream video setup.  They are great with technology and love the museum environment.

This is the first ever dance company residency at the Smithsonian. Do you know why the Smithsonian has decided to offer this residency?  How did you and your company become a part of it?

The exhibition curator, Amy Henderson is brilliant and she knew that the first Smithsonian exhibit on American dance would have to have actual dancers.  Amy approached me due to my experience in working within museum spaces. This project aligned perfectly with the Ballets Russes Exhibit commission I received to create a new work this summer.  This year will have been spent creating works in and for museum spaces directly inspired by the history of dance.  These combined works will premiere at the Kennedy Center in February 2014. It is exciting for the company to access new audiences that might not experience dance in a theatre without this residency introduction because they are more visual art aficionados. One really fun part of the residency is that we will have a streaming live feed of me working with dancers in the museum on Saturdays.  This year the number of people to see the company is [expected] to be 250,000 due to these projects.

You have quite a range of dance artists mentioned that will be honored in your new work “Homage,” including Shirley Temple and John Travolta right alongside Ted Shawn and Katherine Dunham!  How did you choose these artists who pervaded pop culture on screen and/or on stage?  Are these artists who influenced you in some way?

They are not all dancers that influenced my work; rather, they have fascinated me over the years.  I love the juxtaposition of varying aesthetics and stories of the artists in the exhibition. They exemplify the diverse landscape of America itself.  Due to researching a large array of dance artists, I can really understand how American creativity and innovation is directly reflected in the field of dance.

One of the new works you mentioned will be site specific to the Ballets Russes exhibition.  What made you choose that exhibit (or why was that one chosen for you)?

I was asked by the Gallery if they could commission me to create a new work inspired by the exhibition.  The other groups they presented performed historic reconstructions (the Bolshoi and the Washington Ballet), but the Gallery also wanted to commission something new.  When they asked me if I would do this, I was honored and I had a wonderful time making the new work entitled “Revenant Elegy.” I ultimately was inspired by Balanchine’s work, “Le Bal,” which set designs and costumes were in the exhibition.  It is from the last season of the Ballets Russes, a strange psychological ballet about how we perceive aging and beauty.  I loved this concept and created a new story ballet about a middle-aged woman remembering herself and an unrequited love in the past.  I choreographed a second shadow cast that reflects her anxieties around recalling her memories of self and first love.  The protagonist is haunted by emotions of the inner terrain about aging and perception of memory.

For more information about Dana Tai Soon Burgess Dance Company and the residency at the Smithsonian in Washington, DC, visit dtsbdc.org.