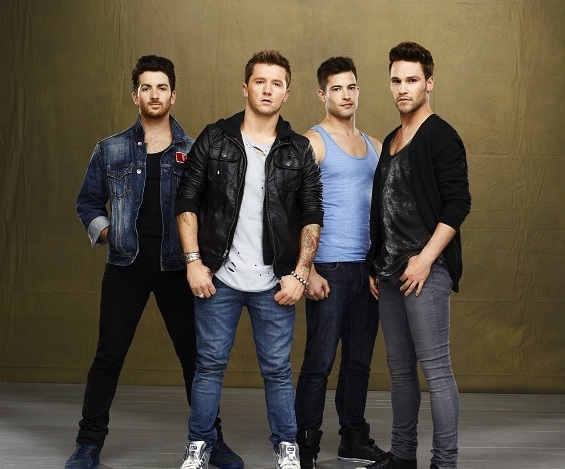 Dance Informa was invited to take a dance class with Travis Wall, Teddy Forrance, Nick Lazzarini, and Kyle Robinson of Shaping Sound to promote the July 31 release of their new weekly reality dance show All The Right Moves.

Travis Wall is a visual musician, and he will be the first to tell you so. “I feel I take music and I shape sound. My musicality…was always what I was best at. So, I ran with that,” he confidently tells me in a packed studio at Broadway Dance Center last Monday evening. Thus, his company Shaping Sound was born out of this desire to control music with nothing else but the human body. “I feel like I am a musician, but I don’t play an instrument, I play my body,” he says.

Other musicians in this symphony of movers are the three co-founders of Shaping Sound: Teddy Forrance, Nick Lazzarini, and Kyle Robinson. Their new show on Oxygen, All The Right Moves, which starting airing last week, profiles their journey of running their dance company from the inside out. Rehearsals, performances, and drama can and will happen.

“I’ve always said we should have our own T.V. show,” Wall quips, “I was like, ‘This is our opportunity.’” After shopping the idea around to a few networks, Oxygen jumped at the show. The deal subsequently closed on January 2, 2012. By February, camera crews were hard at work filming the newly birthed company in rehearsal, and continued filming until just last week. “Everything that we did is current for our audience,” Wall revealed. “It’s not like, ‘Oh, we filmed this six months ago…It’s current with what we’re doing as a dance company, so it’s good.’”

This dance company is already a force to be reckoned with, despite the fact that the company has only had a few official performances. With a roster of artists ranging from So You Think You Can Dance alums (including Season 8 winner, Melanie Moore) and the best and brightest of the commercial world (some of the dancers having worked with Adele and Lady Gaga), it’s no wonder when it came time to cast his company, Wall went straight to his group of talented friends.

“It’s why we started Shaping Sound. We wanted to give our friends jobs,” Wall said. “There’s not really an outlet for [commercial contemporary dancers] past things like So You Think You Can Dance, so we wanted to give dancers an afterlife.”

And, putting your friends together proved to be a perfect situation for Wall, adding it was a dream to work with them everyday in the studio, especially when he was used to choreographing by himself for so long. “The [choreographic] process with the dance company is very different and I learned a lot about it,” he stated.

It helped that most of the dancers had worked with him in other contexts before, whether it was a Dancing with the Stars gig or onstage at a convention, so they were already familiar with the type of movement style he wanted.  “They know what to do and where to go,” he says of his dancers, “It’s easier to clean and to get what I want.”

And, he wants a lot. Wall has large aspirations for Shaping Sound; make that, arena-sized. He sees the same popularity demanded by pop stars in a 20,000-seat concert venue for his dancers. “We could go on tour and have thousands and thousands of people scream our name because we are dancers. Not singers. Not actors. Dancers. And, that’s what I want for Shaping Sound,” he states with pure enthusiasm.

Well, if anyone can do it, it’s Travis Wall and this team of talented artists.

Catch All The Right Moves every Tuesday night on Oxygen.