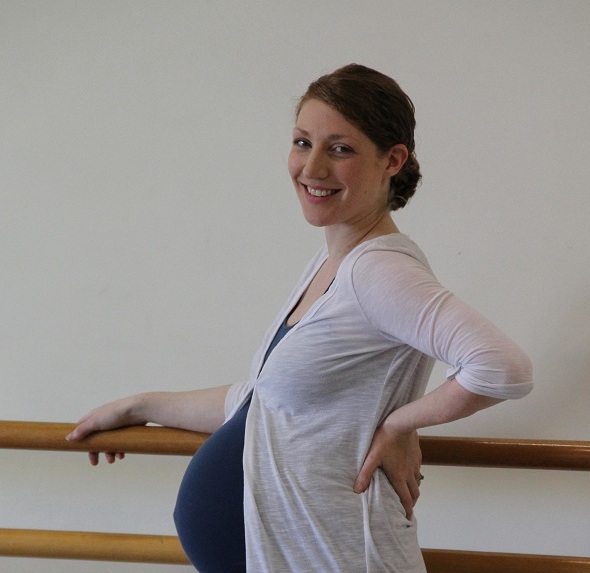 For dancers, who are so in control of their body and used to being intensely self-focused, the idea of a dramatically changing body and shift in priorities may seem like a shock. For dancers who have faced these changes and now have a young life to add to their own, however, the journey is well worth it. Nowadays, more and more dancers have found that, with some hard work and patience, it is possible to raise a family and return strong to their performing careers.

New York City Ballet Principal Jenifer Ringer, who is already a mother of a young daughter and is almost eight months pregnant with a little boy, says the most important thing for pregnant dancers is to listen to their bodies. During each of her pregnancies, Ringer’s doctor ensured her that any activity her body was used to doing would be safe and healthy, as long as she felt comfortable. For Ringer, that meant performing up until about three months into her pregnancy, but even now, she continues to take partial ballet class.

“I cut back depending on how I feel,” Ringer says. “I’ve heard of some dancers doing grand allegro up until they give birth, but I was never comfortable with that. Now, I’m basically just doing barre and then adagio and tendus in center and then I’m done.”

Each dancer’s body will feel different during this time of change. Laura Tong, a soloist with The Australian Ballet, whose son Henry is about six months old, performed until she was 19 weeks pregnant and took class or barre in some form until she was 8 months along. “In the later months, I spent most of the time giggling about my attempt at an arabesque and the fact that I’d forgotten what a stomach muscle was,” Tong says, “but it was nice to still be able to spend that time in the studio with my friends and colleagues.”

Tong also recalls the last partnering role she performed while pregnant, as Kate in Madame Butterfly, at about 15 weeks. “Poor Rudy Hawkes had to lift me above his head and twirl me around,” she says. “I think that pas de deux work during pregnancy is sometimes more daunting for the man, as they feel completely responsible for the safety of all three of you!”

Abby Silva Gavezzoli, a dancer with Parsons Dance, worked together with her doctor (she had to promise to wear a heart rate monitor during physical activity), company directors and fellow dancers to ensure she could safely tour and perform with the company for as long as possible during her pregnancy. At the time, Parsons Dance was preparing for their season at The Joyce, and while some of Gavezzoli’s more rigorous parts were understudied, she said she still danced a good bit.

Abby Silva Gavezzoli of Parsons Dance, backstage with her son, Marcello, during Parsons' 2012 season at The Joyce.

“I toured and performed until I was about six months along,” says Gavezzoli, whose son, Marcello, was born in August 2011. “I took full class, including jumps and pirouettes, which were hilarious, until seven months. I remember at the end of that month just feeling like, ‘Okay, enough!’ I just wanted to sit in my new rocking chair and read with a fan blowing on me!”

As dancing gets harder further into the pregnancy, dancers often rely on lighter activities, such as yoga, walking and some Pilates, to keep themselves in shape.

Gavezzoli says she did a lot of walking and core-stabilizing exercises like planks. She also went to prenatal yoga up until the week she delivered. “That was great for meeting other expectant mothers and to share what we were experiencing,” she says. “It focused more on getting you ready for the delivery, which I was having so much fear about.”

Once an expectant mother does give birth, it is important that she talks with her doctor about what’s healthiest during her return to the stage. Dancers should embrace the process, which will most likely be a gradual one, as it takes time for a woman’s body to recover. And again, each dancer’s experience will be different.

Ringer says her first child hardly slept, so that left no time for exercise for the first three months, but her physical therapist recommended waiting that long anyway. After six months, Ringer was back on stage, although she says she wasn’t at her optimum performance weight until about one or two months after that.

Tong started her rehab with Pilates about six weeks after giving birth, and she progressed to simple barre exercises a few weeks later. She will return to the stage in May, when she performs Onegin at the Sydney Opera House.

Gavezzoli says she felt anxious to move her body after giving birth and that her family had to remind her to not push herself. Once she did get the all clear from her doctor, she went back to the studio in November (she brought Marcello along every day) and performed in Parsons’ season this past January.

Aside from the process of getting the body strong and in shape again, a struggle for many new mothers is the time away from their baby.

“Ballet class is in a lot of ways a very self-involved thing,” Ringer says, “and I had been giving so much love and care to this baby, it felt strange to go back and do something that was so self-focused. It didn’t feel as important as raising a life.”

“I was always active, not only dancing but also running, swimming and doing yoga,” adds Gavezzoli, who says that a 10 a.m. ballet class can no longer be her first priority. “It’s hard not being able to just drop everything and go for a run. I miss that freedom sometimes, but then there’s a little giggle or smile from Marcello and the feeling passes.”

Ringer says that her realization of what is most important in her life has actually translated into making her a better dancer. “There’s something really freeing about dancing now for me because it’s not the most important thing in my life,” she says. “My children are the most important thing in my life, and now when I dance it feels like a joy and a privilege to do, and I give myself more of a break. I allow myself to make more mistakes, and I think that’s made my dancing better because I don’t worry about being perfect all the time.”

As far as advice for other dancers who want to have a baby and return to stage careers afterwards, all of these women say to go for it.

“It’s a beautiful thing,” Ringer says. “Seeing my body change and gain weight over these 40 weeks is a miracle. So embrace it, enjoy it and know that you’ll be able to get your body back with just a little bit of hard work and time. It’s all worth it.”