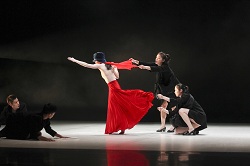 During its New York debut, Cloud Gate 2, a Taiwanese modern dance company, presented at The Joyce an evening of five works by four choreographers and provided a glimpse into the emotional and physical range for which this company has the capacity.

The group, despite being called “number 2”, is not second to Cloud Gate Dance Theatre; rather, it is its own entity, one that prides itself on creating substantial works by a number of young Taiwanese choreographers. Both Cloud Gate and Cloud Gate 2 are directed by Lin Hwai-min, and while Cloud Gate performs mainly his works, Cloud Gate 2 is a springboard for newer creative voices, but is definitely just as strong.

During their four-performance run at The Joyce this February, the troupe seemed to fuse dance theater and pure dance phrases, along with interesting musical choices and standout lighting. Cloud Gate 2 seems to not be a company of hierarchy. Each dancer had his/her own individual voice, and the group as a whole was nothing less than connected.

The mixed program began with “Wicked Fish”, choreographed by Huang Yi, who also danced in the piece. It opened with a string of dancers across the stage, with overhead lights casting down on the dancers, dressed in blues and grays, and shrill music that at first seemed obtrusive. Within just a few moments it was apparent that these dancers were extremely well-rehearsed – their movements so in sync and their bodies moving in a most aesthetically-pleasing wave. 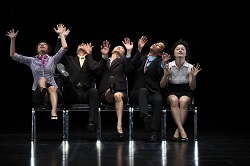 At one moment, only knobby body parts like elbows and knees could be seen under the lights. At the next, the group moved in canon and in slow motion, and then they’d quickly rewind. A series of duets – boy and girl, boy and boy, girl and girl – graced the stage. The couples’ bodies seemed to never depart contact through the slides and around-the-body lifts. The dancers were so athletic, so committed, but the best part of “Wicked Fish” was that the movement was so beautiful and fluid that we almost forgot about how piercing the music was overhead.

Next was Wu Kuo-chu’s “Tantalus”, which opened with six dancers in pedestrian clothes standing hunched over, eyes out to the audience under a square of light. They remained still for a long, long moment. Then one dancer stirred, out of discomfort, and then the whole group was awoken. One by one, an individual’s movement became contagious through the group, which was only brought back to neutral with long, loud breath patterns.

After several minutes of only sounds of claps, breaths, sighs and foot stomps, we welcomed the music of Meredith Monk, a storyteller herself. The piece became funny and human in that we recognized that we, as people, exhaust ourselves, constantly running and not getting far enough or even fighting with the air.

“Passage”, choreographed by Bulareyaung Pagarlava, pinnacled the evening in showcasing Cloud Gate 2 as a group with a strong dance theater element. A pretty girl was unwillingly clothed in different dresses and fabrics by four characters who seemed to be her caregivers. The girl was distracted, seemingly possessed, longing for something beyond her room. Meanwhile, a strong presence – a figure covered from head to toe in white – slowly strode around the scene, as he carried a large umbrella and wheeled a black suitcase beside him.

One by one, each character stripped off their black coat and danced in a powerful fit, as if they, too, had become possessed. Towards the end, clouds of white powder were thrown to the sky, creating a most strikingly beautiful image, and the dancers lay under a white sheet, where the girl had preceded them.

In Huang Yi’s second piece on the program, the quirky “Ta-Ta For Now”, was like a day at the office without the boss. The dancers, wearing office clothes, spun on, climbed over and stacked desk chairs. They interacted with each other, passing along imaginary objects, making finger people and even throwing their shoes. Despite its apparent light feel, the piece involved such incredible precision. There were times of amazing body response to the music as the tale was told via the violin in Aram Khachaturian’s Violin Concerto in D minor.

Cheng Tsung-lung’s “The Wall” closed the program. The dancers, all in black, began by walking the perimeter of the stage, creating some kind of wall, encasing themselves in a world of their own. Again, one by one, the dancers broke the mold, stripped their black and burst into their dance, nearly naked but so sure of their decision.

“The Wall” displayed the company as incredible movers, and some of Tsung-lung’s phrases appeared to have the feel of hip hop’s body isolations. At the end, one figure, who remained in black, walked into the field of what may have been mistaken as “chaos” but was surely just the temptation of the freedom of dance. Will he, too, be tempted?

During much of the evening, it was sometimes hard to tell the dancers apart. Aside from the choreographed moments of staring out into the house, their dancing was so internal as a whole, as if they were one body, each dancer just a different limb and one expression of a larger voice. And their bows were so gracious, their eyes almost in awestruck of what sat before them.

Cloud Gate 2’s engagement at The Joyce was one of such interesting, engaging work. It wasn’t dance for the sake of dance; rather, it was movement for the sake of saying something, and each of these young artists seems to have something profound to say.