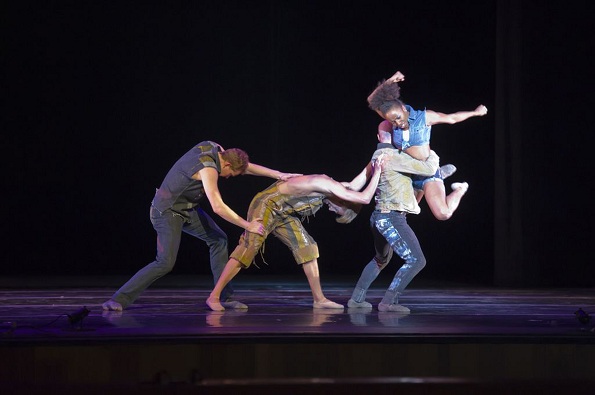 Friday night’s performance of the Gotham Arts Exchange’s Focus Dance featured the sweet rhythms of Jason Samuels Smith and Company and the spectacular Trey McIntyre Project. A seemingly odd paring, the two companies’ contrasting genres, styles, and tones complimented each other nicely, making one think, “This is what American dance is about!”

Tap dancer extraordinaire Jason Samuels Smith and his talented dancers started off the evening with Smith’s piece A.C.G.I: Anybody Can Get It. From this first piece, Smith made his mission clear; tap dance is making a comeback and he wants to be at the forefront of it.

Accompanied onstage by 3 musicians, Smith and 4 of his dancers gave a cool, carefree performance. While their upper bodies remained loose, their feet moved at impressive speeds; it was as if they had detached their ankle joints, allowing their feet to move independently from their bodies. Each dancer had a solo break out, displaying their own abilities and artistry. At one point, the musicians stopped playing so that the audience could indulge solely in the sounds of the dancers’ feet. The audience reacted enthusiastically, expressing their delight verbally and frequently.

A.C.G.I was followed up by Chasing the Bird, a virtuoso female trio that featured some of the world’s finest tappers: Chloe Arnold, Michelle Dorrance, and Dormeshia Sumbry-Edwards. Originally, Chasing the Bird was part of a larger work titled Charlie’s Angels: A Tribute to Charlie Parker – it was Smith’s salute to the legendary musician. Performed to original recordings by the great saxophonist, the work captures the essence of jazz music’s playfulness and intrigue. Each dancer brought her own individuality to both the solos and synchronized sections of Chasing the Bird. Their musicality was right on par, engaging the audience in a musical conversation between tapper and the late, great Mr. Parker himself.

The second half of the program highlighted Boise’s Trey McIntyre Project. The contemporary ballet company performed two of Mr. McIntyre’s works: In Dreams and The Sweeter End.

Set to a compilation of Roy Orbison music, In Dreams was a series of vignettes, performed by five of TMP’s dancers. McIntyre’s choreography embodied the heart and soul of these well-known American tunes, making it a stunning visual interpretation of Orbison’s lyrics. McIntyre used series of fast and furious phrases, followed by suspension and breath. It was interesting and well done.

The dancers moved seamlessly through the intricate steps and partnering, so the movement never looked forced or contrived. In particular, the section danced to Orbison’s “Crying” displayed McIntyre’s precise musicality and the dancers’ expressive qualities.

McIntyre’s The Sweeter End, which received its premiere this past summer at Lincoln Center’s Out of Doors Festival, brought a distinctly New Orleans vibe to the Joyce Theater. Set to original music by the Preservation Hall Jazz Band, the ballet was fun, flirty, and full of endearing idiosyncrasies.

I was captivated from the first section in which Chanel DaSilva came out and spray-painted a large “X” across the backs of three of the male dancers until the bittersweet end when the audience was pleasantly surprised with an encore performance. The dancers kept up their energy and spunk until the curtain came down. It left me wanting more. Who knew such innovative ballet was happening out in Boise, ID?

It was a successful night of artistry, which made me proud to be a part of American dance. From the tantalizing rhythms of tap dancing to an original interpretation of contemporary ballet, Friday night’s performance of Focus Dance had me leaving in a dance euphoria.