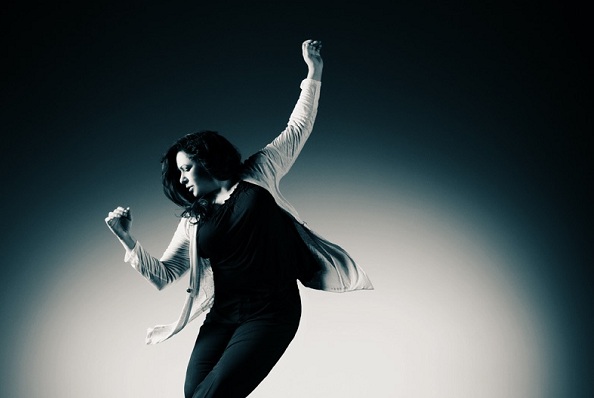 Proud Cuban-American Liz Imperio has established herself as a major director and choreographer in the entertainment industry across the United States and Europe. Here Liz shares her incredible story.

When did you start dancing and why?

Like many dancers I started at the age of two, but unlike many dancers I started dancing because I was overweight for my age. I’m first born generation here in the United States. My family is originally from Havana, Cuba. My mother was a ballerina in the National Ballet of Cuba under the artistic direction of Alicia Alonso. My aunt was a child star who was featured in many TV, radio, and stage productions. When communism swept over Cuba in 1959, it destroyed my family’s way of life. In 1968 they decided to flee their home to find a better way of life.

On June 19, 1969 my mom gave birth to a 10.5 lbs. baby girl, Me. Coming from a Latin family, food, music and dancing are a very big deal and my grandmother’s cooking kept me a very healthy weight. By the time I reached age two my legs were starting to bow, affecting the way I walked. My mom became concerned and took me to the doctor. The doctor told my mother to put me in some type of active exercise that would help me lose and maintain my weight. Considering my family’s background they thought the most sensible choice was to put me in ballet.  My mother, who is the backbone of my career, is still my best critic and advisor today. It became my mother’s quest to find me the best teachers and mentors to help me broaden my love, knowledge, and experience of dance.

What was the first professional job you ever booked?

By the time I was 9 years old I was already being paid to perform as a Ballet, Salsa, and Flamenco dancer.

I guess I consider my first real job to be with a professional flamenco company, BELA (Baile Espanol de Los Angeles). The company was under the direction of Roberto Amaral. I remember attending BELA’s company performance at the Wilshire Ebell Theater. I was so moved by the choreography, dancers, live musicians and singers that I found myself crying for joy during most of the performance. I turned to my mother and I said “I don’t care what it takes or what I have to do, but I must be in that company”.

Mom sought out Roberto to see if I could come in and take some classes. After six months of training with Roberto the company was holding an audition for two new members. When I arrived at the studio there were about 75 dancers. I was clearly the youngest one there but I didn’t care.

When Roberto said “congratulations you’re in the company” it was the best day of my life. I was under contract for two years. At the time I was 14 years old and the next youngest dancer in the company was 24 years old. I was the first underaged dancer the company ever had.

What is your fondest memory as a dancer?

Having had such a wonderful career as a dancer, I have to say that my fondest memory was working on the movie Dick Tracy. It was my first SAG film. It starred Warren Beatty, Al Pacino, and Madonna. After an audition of about 300 dancers, there were seven dancers contracted for the job. The choreographer was Jeffrey Hornaday, assisted by Michelle Johnston. It was such an amazing experience working with such icons of cinema. They involved us in so many aspects of the acting process. It was my first real experience not only working as a dancer but also as an actor. Warren Beatty and Al Pacino were so giving as artists to all of us. It made me realize how vital we are as dancers to help drive a story forward. Dancers should always understand that although we move to music, it’s not the only thing we should focus on. It’s also about knowing how to bring a character to life.

How and why did you transition into choreography?

When I was about 17 years old, I was asked to audition for a Las Vegas show. At the time they were looking for specialty Latin acts. The show’s director/choreographer was Kenny Ortega. I remember that audition so vividly. My mom and I showed up at Debbie Reynolds Dance Studio late morning. I signed up as a Flamenco dancer. When it was my turn to enter the room my mom walked up to Kenny and pulled out a photo album. Kenny looked a little confused and asked “what am I looking at?” My mom explained that different costumes represented different styles of Flamenco from different regions of Spain. Kenny was intrigued. So he pointed out an outfit that caught his attention. I changed into that costume and performed that solo. Each solo was about 5-7 minutes in length. At the end of the performance Kenny stood up and started applauding. He was so excited he picked out another costume. I think I ended up dancing for about 30 minutes straight for him.

When all was said and done, he thought I was too young to dance in the show, so he offered me an assistant choreographer position. I was so excited and so nervous at the same time. I had never assisted anyone before.

Kenny pushed my boundaries in every direction. He helped me to open my eyes and understand what it took to put together a show together from vision to final product.

Following that job I was given multiple opportunites to continue assisting him over the next three years. I was able to work with him on the stage production for Michael Jackson United We Stand, the film Salsa, TV shows like American Music Awards, ABC 50th Anniversary, CBS series Dirty Dancing and ABC series Hull High.

Having been under Kenny’s wing for a while he asked me to join him on a special project that was close to his heart. Gloria Estefan had brought Kenny in to work on a new music video, Seal Our Fate. Kenny thought I was ready to handle the job not as an assistant but as an associate choreographer. The job was a success. The following week Kenny gave me a call. He was in an awkward position. Gloria and Emilio Estefan asked him to choreograph her new world tour but at the same time he was about to start pre-production for his first film as a director, Newsies. Because he couldn’t be in two places at once, he offered me the position of choreographer. I couldn’t believe it. At 20 years old I was going to choreograph Gloria Estefan’s world tour Into the Light. After that I worked with Gloria for two more world tours, various commercials and TV specials. I thank Kenny that he had that much confidence in my talent.

What is your favorite experience as a choreographer so far?

My favorite experience as a choreographer is also my most recent. In a last minute decision I was brought in to work with Jennifer Lopez and Marc Anthony for the American Idol Finale. Fortunately, I had already worked with both artists before. The job was one big whirlwind. I was at the airport arriving from out of town when I got a text from my manager, Jim Keith (The Movement). “Are you in town to meet with Jennifer Lopez today?” I had less than two days before the performance was going live on national television.  I rehearsed that night with Jennifer till 12:30am. The following day I booked the studio and set the choreography with the dancers before a 6pm tech rehearsal at the Nokia Theater. Next thing I know it’s Wednesday and the show is in full swing. Next to Scotty’s win, Marc’s performance and Jennifer’s dancing was all anyone could talk about. I’m very proud of that achievement. It’s a moment in my life I won’t soon forget.

What is up next for you as an artist?

I’ve always wanted to follow in the directing footsteps of Bob Fosse, Kenny Ortega, and Rob Marshall. Presently, I own a production company with my creative and business partner Chad Carlberg. My eventual goal is to direct feature films. Chad is currently writing a script that will bring that dream into reality.

Liz Imperio is represented by The Movement / A Dance Management Company
www.MovementMGMT.com