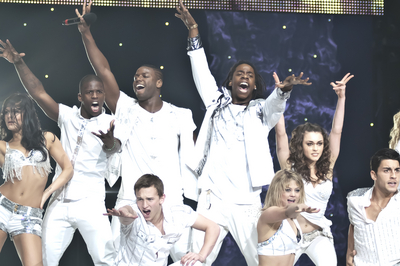 SYTYCD Season Seven’s top dancers have just finished a tour of 40 cities across the country.  At Los Angeles’ famous Staples Center we enjoyed the tour showcase, as we relived powerful and comedic moments from the series accompanied bya few new dance numbers choreographed especially for the tour.

The dancers were in fine form, and despite having completed 38 shows prior to their Los Angeles visit, their exhaustion didn’t show.  Season Seven favorites Lauren, Billy, Kent, Ashley, AdeChike, Robert and Jose were joined by All Stars Allison, Courtney, Ade, Kathryn and Dominic, along with Season Six winner Russell. A powerful and dynamic dance team, the dancers not only performed their routines, but also MC-ed the show, with Cat Deeley and Nigel Lythgoe only speaking to us from large LCD screens with pre-recorded messages.

The dancers in general were quite capable behind the microphone, which is no doubt a skill they have been developing from their time on camera.  Their lines were at times a little ‘cheesy’, but it was all good fun.

The opening number, in all white costumes, was explosive and it set the tone for the evening. It was then followed by performances of popular routine after routine from the show, featuring the many styles of dance. Jose and Dominic re-enacted their break dance duo, choreographed by Tabitha and Napoleon, and it was impressively more powerful on stage. The number was one of the highlights of the evening.

Dee Caspary’s contemporary number for Ashley and Ade to Cosmic Love by Florence and the Machine was also more poignant on stage, and I found myself losing my breath. The fluid and non-stop choreography was performed so effortlessly by the talented pair.

Unfortunately the hip-hop numbers were lost on the large stage. It was obvious that they were designed more for the camera than the theater. The Bollywood numbers, however, shone on the large stage and we could feel the dancers’ energy exude across the center. The entire cast performed a colorful Bollywood number that had the crowd bopping in their seats. A large disco number, choreographed especially for the tour, was also very entertaining and exciting to watch.

The dancers were all strong and they proved to us why they were chosen to be highlighted by Fox. Kent Boyd was a definite stand out, as on the show, and he even gave us a few impressive B-Boy moves that I didn’t remember him displaying during the series. Kent is a well rounded dancer with a huge future ahead. Billy Bell was also phenomenal, displaying extreme flexibility, strength and grace.

The tour performance was a lot of fun and a true celebration of the many faces of dance. I left the Staples Center uplifted and a true believer in what SYTYCD is offering the new generation of dancers.