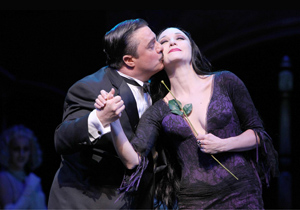 Trick or treat? The Addams Family is a bewitching Broadway musical and an indulgent treat for anyone wanting a heart-warming experience full of madness and mayhem. This hysterical feast for the senses proves to be much more than just a comical farce, as it explores the universal themes of love, family, acceptance and growing up. Based on the original works of American cartoonist Charles Addams, the story hones in on Wednesday Addams newfound love Lucas and how their opposing families collide over an explosive dinner party.

With the spotlight focused on Wednesday Addams played by the bright eyed and incredibly talented Krysta Rodriguez, we were able to witness the young star’s piercing vibrato which was beautifully showcased in the number Pulled. However, it was the dynamic duo of Gomez and Morticia Addams, played by the side-splittingly funny Nathan Lane and the smouldering Bebe Neuwirth, that stole the show.  They commanded the stage with the nonchalant flair of true Broadway stars. The comic timing of Lane was impeccable as he reduced the audience to peels of laughter with just a single wink. Oozing sex appeal, Neuwirth was the envy of every woman in the audience with her svelte figure clad in a dress ‘cut to Venezuela’.

The music and lyrics of Andrew Lippa created a culturally diverse musical score with Spanish, Operatic, Big band and even Hawaiian influences. This added a little insight into the characters’ heritage and hidden talents… Who knew Uncle Fester could play the ukulele? Each musical number was the perfect accompaniment to Serjio Trujillo’s picturesque choreography, which ignited the imagination of the audience. 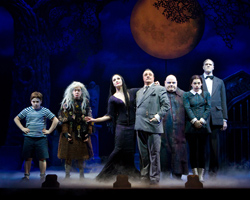 The Tango de Amor was an essential moment of passion between Gomez and Morticia, however it also revealed the technical abilities of the company, whose staccato footwork was executed with attack and vigour. The Moon and Me was a dazzling display of lights, illusion and humour as Uncle Fester appeared to fly up to the moon, which he toyed with like a basketball all star. With an entirely blacked out set, the beautiful simplicity of this number showed that the sheer brilliance of the content is what drives the success behind this musical.  Nevertheless, the rest of the show was a true mega musical spectacular with huge sets boasting intricate details right down to photo frames and cobwebs on the mantelpiece.

I felt like one of the family as the characters continuously broke the ‘fourth wall’ and spoke directly to the audience. Set in New York City, the show seemed to be custom made for a Broadway audience and the personal jokes further strengthened the actor/audience bond. The script was bursting with inter-textuality as the writers Elice and Brickman drew from many references including The Sound of Music and children’s nursery rhymes, which were morbidly mutilated to become moments of sheer brilliance.

The mood intensified in Act Two through an array of duets which showed the vulnerability of even the most robust characters. Nathan Lane showed touching tenderness in the ballad Happy/Sad which dealt with Gomez’s paternal reluctance to let Wednesday grow up. Writers Elice and Bickman noted the importance of the word ‘family’ in the musical’s title which they claimed was it’s “point of origin, and the guiding principle.”

The show continued to deliver hit after hit and the finale was a knockout with the triumphant number Move Toward the Darkness. The Addams family brought light to the darker side of life with a truly stellar array of musical numbers and a star-studded cast. They’ll make you laugh, they’ll make you cry and they’ll definitely make you blush. The Addams Family was a frightfully fun night not to be missed!

For tickets and information visit www.theaddamsfamilymusical.com