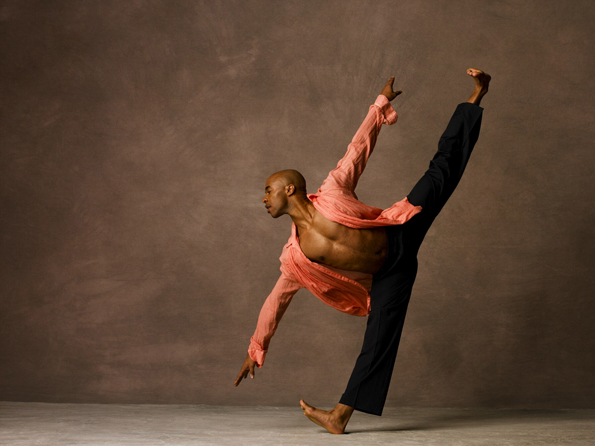 I had the pleasure of speaking with Matthew Rushing, 19 year veteran performer of the Alvin Ailey American Dance Theater, early on a Friday morning in September.  His humility, humor, passion for dance and well rounded talents were apparent during our conversation as we spoke about his transition from principal performer to Rehearsal Director at AAADT.

What qualities do you have that make you so well suited for the transition from performing dancer to Rehearsal Director?
My undying love for the AAADT organization and my desire to share it are the qualities that make me suited for this transition. When I was young, it was a dream of mine to join the Ailey company.  My dream has come true and I feel my love and passion for AAADT has matured.   I will take this with me in my new position as Rehearsal Director.

During  my 19 years in the AAADT Company, I’ve learned a great deal about the company’s repertoire and the function of the organization.  I was able to play an important principal dancer role at AAADT and learned ballets that were created on me.  That learning of the ins and outs of the ballets and of the Company  structure have prepared me to fit right into a leadership role for AAADT. I have also already had experience working under Ms. Jamison to assist ballets and have helped run rehearsals for Assistant Artistic Director, Masazumi Chaya.

How are you finding balance between the artistic and technical demands of performing Company member and Rehearsal Director as you prepare for this season?
At the beginning of summer it was understood by myself and management that I would dance and be Rehearsal Director this year and I was up for the challenge.  After taking some time to really think about it, I spoke with Ms. Jamison and we agreed  I would benefit from a little time to transition.  I will be performing in AAADT’s 5 week NY City Center Season but will not be dancing during this year’s Fall UK tour.

What are your most important goals as you make this career transition?
I look forward to learning about the work on a deeper level and gaining a broader perspective of the repertoire.  I aim to preserve the work while ensuring the dancers stay true to the work.  I want to be another eye for the dancers and help them grow as artists and dancers, guiding and aiding them both artistically and with their technical work within the repertoire. 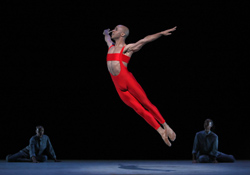 Describe your work load this year.
The beginning of the rehearsal season was very interesting.  Geoffrey Holder was reviving The Prodical Prince and I assisted him during those rehearsals.  Holder personally coached me when I danced the role in 1998 so I knew that ballet very well.

However, I find that during most weeks, I do a lot of Rehearsal Director homework at night so I also have time to concentrate on staying in shape for my final season dancing with AAADT.

I find one of the most incredible experiences as Rehearsal Director is to be working so closely with Ms. Jamison.  She’s been directing the Company since 1989 and I’ve previously assisted her on rehearsing ballets.   The way I am working with her now, in my role of Rehearsal Director, is much different because I am hearing her thoughts as I sit right next to her during rehearsals.  I hear her likes, her dislikes, and what she wants to see more of.  It’s really amazing getting more inside her head.

When and how did you realize you were ready to transition from 19 year performer with AAADT to AAADT rehearsal director?
I remember first mentioning the idea to Rehearsal Director, Masazumi Chaya, when I was about 24 years old and had only been dancing with the Company for 5 or 6 years.  I was so young and he very generously began teaching me the basics of casting and directing.  Then, I let the idea go a bit to concentrate on my dancing. All these years later I spoke with Ms. Jamison, mentioning that soon I’d be retiring from the stage and that I want to retire at a certain high level.  I want to hang up my dancing shoes while I’m not on the way down.  (he chuckles)  These conversations with Ms. Jamison led to an invitation for me to become Rehearsal Director.  I had known it was time to transition but I wasn’t ready to leave the company.  I dabble in choreography, and love working with young people.  Yet, the complete vision for my future with the Company became clear with Ms. Jamison’s invitation to step into the role of Rehearsal Director.  I feel really good about my last performance season happening during the same season that honors Ms. Jamison in her final year as Artistic Director.  That’s very special for me.

As a Rehearsal Director, my favorite responsibility is assisting dancers as they grow into better artists. I don’t think I’m yet working at the capacity I want and I think that’s a good thing.  There are so many things I want to learn and I’m slowly gaining responsibilities.  Step by step, day by day learning.  I’m taking every little responsibility I get and doing the best I can with it.  And, I’m looking forward.

There is much excitement regarding Robert Battle’s appointment as Artistic Director of AAADT upon Judith Jamison’s retirement from the position in June 2011.  How do your 19 years of performance experience with the Company and this year’s dual role of performer and Rehearsal Director shape your perspective during this transitional year in Artistic Direction of AAADT?
My perspective has been shaped because I know the strengths of the organization and I know that in this kind of transition that everything will be alright.  If anything, things will continue to progress.  Believe it or not, I believe the Company will get better and better and reach more lives; new perspectives.  Yes!  And, that’s what Ms. Jamison wants.  She feels the focus and dedication will still be Mr. Ailey’s vision as seen through different eyes.  Because I’ve been with the Company for so long I understand what goes into the marketing, the financing, the assurance of physical therapy for the dancers…the WHOLE Alvin Ailey American Dance Theater organization is dedicated to preserving Mr. Ailey’s vision. Robert Battle has strong support from the organization and is part of a very capable team. 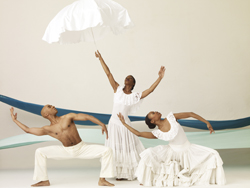 What accomplishments have given you the most satisfaction in life?
I think touching the lives of young people.  I just recently received a couple of emails expressing thanks from two students with whom I worked closely at the Ailey School.  Both have gone along to work in dance Companies in both the US and Europe.  I received the emails at a very important time.  Right now I am an unseen worker and am getting accustomed to life behind the scenes.  It was so good to hear from these students and to be reminded that whatever I give I receive; in sharing it I have positively impacted people’s  lives. It made me feel so good.  These young people will be good to others in turn, by continuing to share the power of art and by touching lives.  Being reminded that what you have done has touched people’s lives and is important to them is very special to me.

How would your colleagues in the Company describe you?
I’m very blessed to say I have a really good working relationship with the dancers.  I’ve been there so long and have close relationships with the senior dancers.  We’ve really grown up together and know each other like family.  As far as the newer company dancers, I’m intrigued by them.  The new dancers bring such an energy to the Company and their newness is a breath of fresh air for me.  I’m attracted to them and we immediately build relationships.  I tell them, ‘If you need anything, you know I’m here’.  Overall, I have a great working relationship with all the Alvin Ailey American Dance Theater dancers.  They’d say I’m supportive and they’d say I’m a hard worker.  They’ve seen my work ethic and they know what I expect from them as Rehearsal Director.  They know me as a choreographer and how I expect excellence.  They also know they can talk to me, share things, ask questions and approach me about challenges they are facing relating to or outside of the Company.  They are comfortable confiding in me and that means the world to me.

What advice do you have for dancers considering or experiencing a career transition from performing to directing?
Make sure that whatever you transition into creates as much passion in you as your old job.  A transition is not a step down; it is a step UP.  A lot of people feel ‘oh, okay, my performing career is over, let me settle for another job, the best time is over’.  That does not have to be the case!  Your transition should be upward.  Use the opportunity to become physically less active but emotionally more active.  Enjoy finding ways to utilize the different aspects of yourself and your talents.