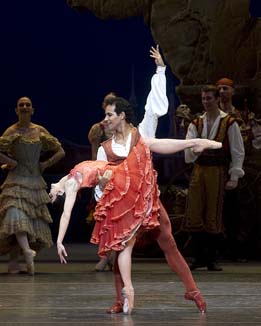 Jose Manuel Carreño, a Principal Dancer with American Ballet Theatre since 1995, will retire from the Company in August 2011 following performances on the Company’s tour to Asia. A New York farewell is scheduled for Thursday evening, June 30, 2011 at the Metropolitan Opera House. The evening will be highlighted by a special performance of Swan Lake featuring Carreño in the role of Prince Siegfried dancing opposite Julie Kent as Odette and Gillian Murphy as Odile.

Carreño joined English National Ballet in 1990, where his repertoire included Solor in “The Kingdom of the Shades” from La Bayadère, the Prince in Cinderella, Franz in Coppélia, Albrecht in Giselle, the Prince in The Nutcracker, Romeo in Romeo and Juliet, Petruchio in The Taming of the Shrew and leading roles in A Stranger I Came, Études, Graduation Ball and Prince Igor. In 1993, he joined The Royal Ballet as a principal dancer where his repertoire included the Bluebird in The Sleeping Beauty, Basilio in Don Quixote, Oberon and Puck in The Dream and a leading role in Herman Schmerman.

Carreño joined American Ballet Theatre as a Principal Dancer in June 1995. His repertoire with the Company includes the title role in Apollo, the leading role in Ballet Imperial, Solor in La Bayadère, Franz in Coppélia, Conrad, Ali, the Slave, and Lankendem in Le Corsaire, Basilio in Don Quixote, the third sailor in Fancy Free, Albrecht in Giselle, Des Grieux in Manon, the Cavalier in The Nutcracker, the pas de deux Diana and Acteon, Grand Pas Classique, Other Dances, Sinatra Suite and Tchaikovsky Pas de Deux, Sergei in On the Dnieper, the Man From the House Opposite in Pillar of Fire, the Warrior Chieftain in Polovtsian Dances, the Son in Prodigal Son, Jean de Brienne in Raymonda, Romeo in Romeo and Juliet, Prince Désiré in The Sleeping Beauty, Prince Siegfried in Swan Lake, the second movement in Symphony in C, the first and second variations in Variations for Four and leading roles in Push Comes to Shove, Theme and Variations, Without Words, Clear, Études, Overgrown Path, Petite Mort and Rabbit and Rogue. He created a leading role in Within You Without You: A Tribute to George Harrison.