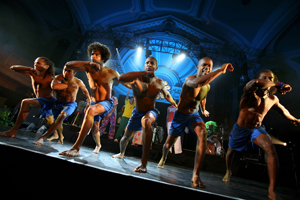 For the first time in Australia, the world’s greatest Capoeira experts will appear in a spectacular live stage show, featuring inspirational young athletes, dancers and musicians who still live today in the dangerous favelas of Brazil. Their bodies defy what seems humanly possible as they leap, flip, kick and spin at breathtaking speed. Warriors of Brazil will tour theatres in January and February with tickets now on sale.

In a show that combines the extraordinary martial art of Capoeira with the uplifting music and dance of Carnival, Warriors of Brazil showcases all of the power and the passion that is modern Brazil. From a country which has much to celebrate with its successful bid to host the 2014 World Cup and 2016 Olympics, its soccer prowess, and powerful musical impact on the world, this show represents a positive flipside to Brazil’s street violence which is also dominating the news headlines.

The super-fit, young men in Warriors of Brazil have escaped the cycle of gangland warfare in the favelas or ghettos of Salvador de Bahia, former epicentre of the African slave trade. Selected as part of a social development program, they are the undeniable masters of Capoeira, and are now captivating audiences around the world and spreading a message of hope for the youth of Brazil. Prior to its Australian premiere tour, the show has had recent critically acclaimed seasons in Edinburgh and Hamburg. Joining them on stage are the singers, dancers and percussionists of Rhythm Carnival who hail from the favela of Candeal, which famously saved its young people from a life of violence by encouraging them to trade their weapons for musical instruments. Members of Rhythm Carnival have performed with Santana, The Fugees, Ricky Martin, Sergio Mendes and The Black Eyed Peas.

Warriors of Brazil is created and directed by UK-based Toby Gough, a theatre-maker with a thirst for adventure, social justice and a genuine passion for nurturing the many fascinating cultures of the global village on the world stage.

Warriors of Brazil opens in Perth on January 8th before touring to Sydney, Brisbane, Melbourne and Adelaide.