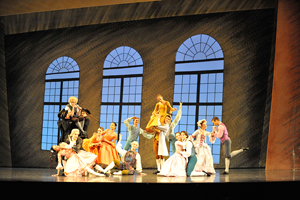 The evening opened with Nacho Duato’s, Por Vos Muero, a work inspired by Spanish music and poetry from the 15th and 16th centuries. Each section of choreography was separated by a piece of poetry, followed by beautiful Spanish music. Duato’s choreography has a simple yet elegant fluidity to it. There were many intricate lifts that created pleasing and sometimes unusual lines. The costuming by Duato himself, in conjunction with Ismael Aznar, was a contemporary take on period Spanish clothing – a Romeo and Juliet feel with a contemporary edge. There was interesting use of props including masks by the female ensemble that created a clever series of different pictures. The male ensemble danced with thuribles (incense burners used in the Catholic or Anglican Church). The use of thuribles created a somber mood but the scent from the burners seemed to spread throughout the auditorium and distract many audience members.

Por Vos Muero is a work that is beautiful and easy so watch. If I didn’t know that it was Duato’s choreography, I would have assumed that it was Jiri Kylian’s work. There are many elements of the work that were undeniably “Jiri”, especially the slow motion running on demi pointe. It is understandable that Duato’s work would have this feel as he is Kylian’s protégé, but it would be nice to see Duato’s own choreographic voice a little more. That aside, the technically demanding choreography was performed effortlessly by the Australian Ballet dancers. 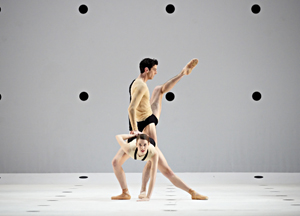 Next was a new work for the company called Scuola Di Ballo (Italian for ‘the dance school’) which was originally a comedy by Carlo Goldini. Léonide Massine used the storyline to create a ballet for the Ballet Russe de Monte Carlo. As the title eludes, the work is based around a ballet school, including an array of characters that keep one entertained from beginning to end. Choreographed by Alexei Ratmansky, Scuola Di Ballo is just one of many forgotten ballets that he has brought back to life.

The characters in Scuola Di Ballo are well defined. The cast had to really put their acting abilities to work. There were many memorable characters including a very talented daughter, played by Reiko Hombo, who’s solo was faultless. The entire cast’s performances were impeccable in both their technique and character portrayal. The most enjoyable performance was by Gina Brescianini as ‘Felicita’, the bad student. She constantly stayed in character and her facial expression was superb. It must have been hard for such a talented ballerina to dance so convincingly badly for the entire ballet.

I was very impressed with Scuola Di Ballo.  The choreography is well suited to the style, era and storyline of the ballet and it was nice to hear the audience laugh throughout the work and really enjoy themselves.

The triple bill closed with a new work, DYAD 1929, by the Royal Ballet’s resident choreographer Wayne McGregor. The stimulus for the work was the period of time 1909 – 1929 when Sergei Diaghilev was the director of the Ballets Russes, the 1909 Antarctic expedition of Ernest Shackleton took place, and the 1929 first flight over the South Pole was successful. There is much history in the background of the work, displayed in an extremely abstract manner. Without reading the program one would have no idea of the historical facts taken into consideration by the choreographer when creating this work.

The stage was set with a creamy white marley floor with symmetrically placed black polka dots. The costumes reflected the colour scheme with a mix of designs for each couple. There was an unusual set of costumes for one couple with the female dancer dressed in a full cream unitard with a giant black dot on her stomach and her partner dressed in a similar unitard with polka dots all over that stuck out almost like pom poms. This costume was unfortunately quite distracting and a little unflattering.

DYAD 1929 is interesting, but the choreography would not appeal to a large audience. It has a feel of William Forsythe’s In the Middle Somewhat Elevated, from its fast paced and technically demanding choreography, but it seemed to fall short somehow. There was so much movement jammed into the music that the dancers didn’t ever seem to have enough time to extend each line to its fullest potential. This was distracting to watch and the movements seemed unfinished.

I can see how McGregor has tried to push the boundaries with DYAD 1929 in regards to set and costume design, the work’s overall look and the speed of the choreography. I commend him on his creativity, but I personally didn’t find the piece pleasing to watch.