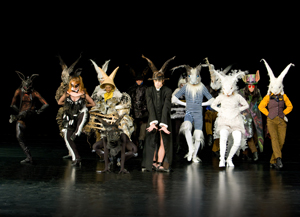 The dancers perform 'Homage to the Rabbits'

The costuming and sets are exquisite, with no expense spared and the story line is more than elaborate. Death, blood and dark magic seem to be the show’s main themes, as the production opens with a video montage of Criss Angel’s spellbinding illusions including levitations and other freakish tricks. I have to say that my stomach was churning right from the beginning as I realized that this show would not be for the young or faint hearted. Scary-looking strange ushers entertained us and played games on stage before Criss arrived and came into the audience, choosing apparent ‘strangers’ on which to display his magic skills before the real story began. These tricks were fun and entertaining.

The story then began…
Angel receives an explosive electric shock, from a magic trick that goes horribly wrong, frying his face off. Images of his melted face and bulging eyes are displayed on the big screen as they are supposedly captured by a video camera on stage.  The image is grotesque to say the least.  This trauma then propels Angel into his sub-conscience as we are given a glimpse into his twisted mind. We are taken through a confusing and strange dream-like story that includes dancing bunnies, dolls, crows, and even the slaying of a monster. Angel falls in love with his assistant ‘Kayala’ and there is an elaborate wedding scene, only for the evil ‘Crimson’ to tear them apart.  The character of Crimson is played by dancer Aminah Abdul-Jillil. She is a feature throughout the show and is sinister and evil. Her movements and dancing were very violent and scattered, but she fitted the part well.

Angel is cut in half, he disappears and reappears several times and he walks down a wall. A scene where doves appear in his hands, although very typical, was actually beautiful and mesmerizing. The dove trick, although probably the most common magic display, was by far my favorite as it was engaging and not gory. At one stage ‘Crimson’ appears to climb through Angel’s body, which although disgusting, is executed very believably. How does he do it? Not a believer of magic myself, I just kept wondering how we were tricked and what clever costumes, props, wires, etc were used to pull off the crazy stunts. One of his tricks was performed not two metres in front of us, as Angel disappeared from the stage and appeared in the aisle dressed in the costume ‘Luigi’, the crazy usher. At the same time, Luigi who had been standing in the aisle disappeared. When something is on stage I take it as just theatrics, but when it happened right in front of me it did send a strange shiver down my spine. Just how does he do it?!

The dancing was, of course, the highlight for me. I was eager to see the work of Australian born choreographer Wade Robson, and was only disappointed by the lack of dance numbers. I had to remember that Believe is a magic show, not a dance show, but still, I was left wanting more movement.  Homage to the Rabbits showed clever choreography and Robson’s skill of creating animal-like movement and feeling. The quirky, sinister little rabbits were dark and fascinating.  The dancers were not quite as neat as I expected, or as precise as I had seen them perform the piece on SYTYCD or in the Believe trailers, but they were still fantastic.  At one stage they tear Angel’s apparent corpse apart and dance with his severed body parts in revenge for the mistreatment of rabbits by magicians the world over. This was very dark and really quite weird and although the dancers were committed and captivating, it didn’t appeal to my taste at all.

There was a brief interlude with aerial work as Kayala performed an exquisite piece, but it too was too short. Unfortunately there is a lack of circus arts throughtout the show, leaving general Cirque du Soleil fans disappointed, but I suppose the circus feats are replaced with an array of interesting illusions. A break dance moment by one of the ushers was fun and seemed a crowd favourite and the dancing crows and dolls were committed to their characters and the choreography. I think I really was much more interested in the choreorgaphy and theatrics than the crazy story line or magic tricks.

Criss Angel Believe was entertaining, but very dark and blood thirsty. I would not recommend Believe to a young audience, or those simply wanting a fun and entertaining magic experience, however as a stage production it is creative and interesting. I personally wouldn’t say that it was one of Cirque’s best productions, but I have to remember that it really is a magic show and about the illusions, not the circus. It has a different type of ‘wow factor’ to that of flying trapeze artists, strong men and contortionists, but it still has its place. There is definitely a mysterious Cirque factor and an excellence in the staging, lighting, costuming and sound.

Cirque du Soleil has entertained audiences the world over with their huge variety of mystical and magical shows. They are always on the look out for dancers and performers to join their team and will be auditioning in Australia in October. What an opportunity! Click here to apply, and for further information.