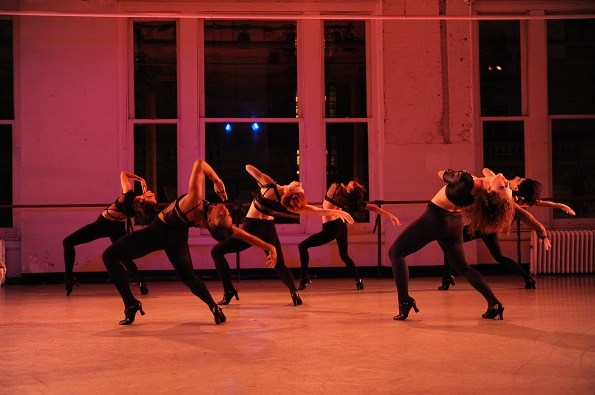 Every year the springtime comes bustling through Steps on Broadway in a big way. The studios see sunshine streaming through their oversized windows; the impending summer months attract a slew of new students, from recent college grads to seasoned vets, ready to emerge from hibernation; and, this well-respected NYC dance studio has its annual Faculty in Performance concert. This year’s sold-out concert took place on May 18 and 19 and showcased a wide array of some of the dance center’s most talented instructors. Everything from contemporary ballet to flamenco to hip hop was shown in a whirlwind production. It was a lot to take in in the two-hour period of time, but it was a definite testament to the variety and talent imbedded into Steps on Broadway. The curriculum is all-encompassing and it was a joy to see this cohesive attitude put to work in the performance.

The standout works of the night were undoubtedly the two pieces performed by the Steps Repertory Ensemble. The ensemble is a tightknit group of professional dancers, ranging from age 18 to 25, who represent Steps on Broadway by performing repertoire from emerging and established international choreographers at various venues throughout the year. One of their main performances is the Faculty in Performance concert, and they delivered two striking works on their home turf. 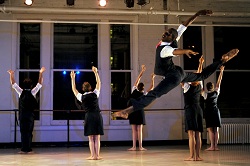 The first work was Knead choreographed by Benoit-Swan Pouffer, current Artistic Director of Cedar Lake Dance Company. Donning black biker shorts, translucent tops of navy and burgundy hues, and black socks, this fluid and dynamic work showcased the dancers’ ability to navigate music and movement in a highly generous fashion. Set to the music of American chamber group, Rachel’s, a constant push and pull of bodies was at play.

An opening duet by Marielis Garcia and the incredibly astute Victor Larue was eye catching. Garcia was able to waver effortlessly from off-kilter arabesques to sky-high passes, allowing the quiet push behind from Larue to mold her body into what it was supposed to be. Their partnership pointed to Larue as a guiding tool to Garcia’s fluidity, never forcing or intentionally shaping, but allowing us to see how his calm force manifested on her form. I also saw a distinct gentleness from dancer Lane Halperin, whose ease and simplicity came through as a sign of maturity. The way she mixed the richness of the music with the discreet strength of her movement was a pure joy to witness.

The second standout work by the ensemble was by the inimitable Larry Keigwin (how can you go wrong?). It’s no secret that Keigwin’s choreography is developed and complex, yet accessible and entertaining, all in one easily digestible work of dancing excitement. It was no surprise the ensemble dancers took on excerpts from Air Suite with ease. It was one of the only pieces of the night that I felt used the entire scope of Steps’ studio theater.

A cheeky, gestural introduction saw the dancers mimicking the obligatory flight attendant instructions (aptly, they were all wearing flight attendance uniforms). The dancers had fun with this kitschy humor, which fed seamlessly into an equally hilarious duet between the lean and lanky Landes Dixon and the muscle-bound, compact Kyle Mullins. A gestural battle of wits, Dixon and Mullins showcased a cat-and-mouse game of flirtation. Quick jolts of movement were punctuated by pauses that found the men in compromising positions—at one point, Mullins’ hands cupping Landes’ bottom. You could not help but let a giggle loose.

The final section, set to the music of the ubiquitous Phillip Glass, was a lesson in free falling. I was taken on an airless journey as the dancers sliced and slashed through the air with such an effortless quality that I forgot a floor was under them to break their falls. Again, eating up space with a vengeance, the female solo moments stood out the most. Each dancer delicately tripped through the space and never gave any warning as to what was going to happen next. Standout moments came from the mesmerizing turning ability of Jesse Dunham and the delicious grounded quality of Emily Schoen (also currently a member of Keigwin’s main company, Keigwin + Co.). At the end of the two hour stretch, though I had seen a lot, I left wanting more of Keigwin’s full-bodied parade of smooth movers.

The ensemble represented the wide-ranging contemporary work happening at Steps on Broadway, but there were also notable pieces across other disciplines. Richard Pierlon’s jazz piece opened the show with a sultry, pulsing parade of ladies (and a few gentlemen) clad in short skirts, bra tops, and, of course, signature black LaDucas. And, I won’t soon forget the Flamenco stylings of Arielle Rosales—excitingly rhythmic and undoubtedly seductive. The night saw many standout performances ushered in by the talented faculty of Steps on Broadway. It is easy to see why they are considered one of the best dance centers in New York City.