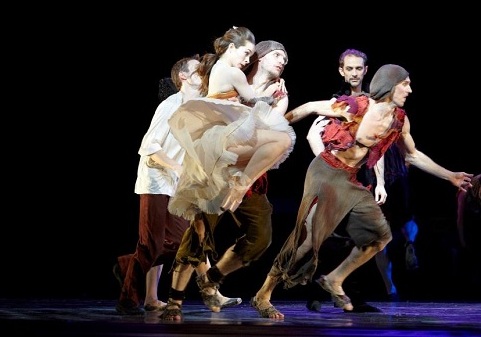 Internationally renowned choreographer Twyla Tharp has created a new storybook ballet for Atlanta Ballet and The Royal Winnipeg Ballet, in The Princess and the Goblin. Based on the 1872 children’s tale by George MacDonald, this ballet has the potential to become a classic for the new generation.

The story, which tells of a young Princess Irene who saves forgotten children from the Goblin Kingdom, is cute and fun, however I was a little disappointed as the story was confusing and lacked emotional highs and lows.

The ballet opened with a grand party scene in King Papa’s garden where Princess Irene, played by Alessa Rogers,  soon discovered that the town’s children were being kidnapped by goblins. The dancing was beautiful, the music was fitting and the costumes elegant. But once this scene moved into the next, where Irene and her male companion Curdie entered the Goblin Kingdom, everything seemed to become a little messy.

White streamers of silk fell from the sky all across the stage, which at first looked beautiful, shimmering in Don Holder’s exquisite lighting design, but they soon became distracting. They were so long that the dancers got their hands and heads tangled in them and it was hard to see the choreography being performed upstage.

The movement phrases given to the goblins were fitting, and the goblins were entertaining, but one couldn’t quite tell if they were meant to be in time with each other or not. Everything just looked a little sloppy. Some of the choreography for the male goblins and Curdie, played by Jacob Bush, was technically very difficult, yet the dancers performed it with ease. The female goblins shone as they embodied their characters, yet still seemed to dance in sync with each other, and with neat execution.

Once we entered the goblin world, King Papa, played by John Welker, became the Goblin King, wearing basically the same costume as when he was King Papa. This was a little confusing. Was King Papa now a goblin? If not, why was he stealing children? And the children’s Nanny (played by Tara Lee), who we were also introduced to in the party scene, came on stage now as the Goblin Queen. There was no explanation as to why these two main characters switched to evil counterparts, and it was puzzling. Were they evil or not? Were they goblins, and if so, why? The dancing by Welker and Lee was, of course, executed well. Tara Lee made a very convincing Goblin Queen and, as always, performed with brilliance.

Princess Irene was assisted throughout her journey by her Great-Great Grandmother, played by Christine Winkler. She was a ghost-like figure in all white who at one point gave Irene pointe shoes, which empowered her to overcome the goblins. Winkler made a beautiful, ethereal character, and is always such an elegant performer.

The highlight of the program was the children. With the cast including 11 children from age five upwards, we were treated to some adorable performances.  The children were dressed in street clothes with regular street shoes on. This was a little unexpected, but it worked. The choreography was simple and fun, yet generally not balletic. The young children made the show. Although there wasn’t much emotional attachment given to these forgotten children, the smiles on their excited faces made up for it.

The music by Franz Schubert and Richard Burke was delightful and the lighting by Don Holder was very impressive. The costumes by Anne Armit of the Royal Winnipeg Ballet were stunning, particularly in the opening scene.

The Princess and the Goblin has all the ingredients for a magical ballet that could become a favorite amongst audiences. However, I feel that it needs a little more time to mature. Twyla Tharp always creates outstanding shows, and I am a fan of her work. In time I think this work will develop all the charm and magic that it needs. A short production, at only 75 minutes, this ballet is perfect for young audiences.