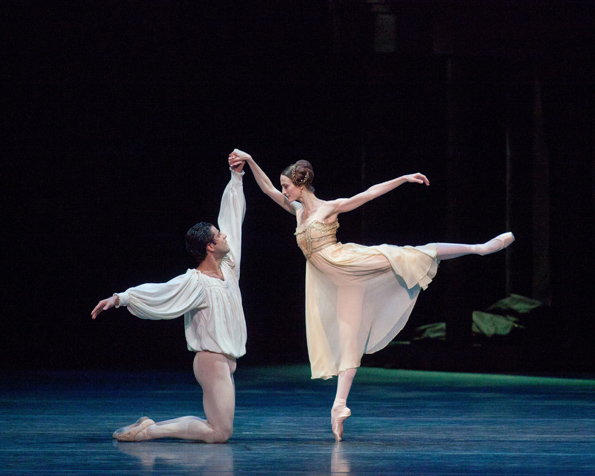 It was the 5th of July when I ventured to the Metropolitan Opera House in New York, the day after the city had celebrated Independence Day and the collective hangover was compounded by the 100 degree heat (38 Celsius). The Met provided the perfect relief through its supply of air conditioning, gorgeous architecture, a little hair of the dog, and of course, American Ballet Theatre’s production of Romeo and Juliet.

Kenneth MacMillan’s Romeo and Juliet is undoubtedly a masterpiece, with elaborate set designs, smooth scene changes, and colourful costumes that remain relatively true to the era of the Shakespearean tragedy. However, there are a few clunky moments that aren’t seen in John Cranko’s version. The most obvious of these is the awkward choreography in the opening market scene, namely from the gypsy girls clomping uncomfortably in character shoes. Fortunately, the dancers transcended the clumsy steps and musicality with suitably dramatic flair and energy. Soon after, Julie Kent as Juliet burst onto the stage with a display of great exuberance and youth as though it was the first time she had performed the role.

Marcelo Gomes (Romeo), Herman Cornejo (Mercutio), Gennadi Saveliev (Tybalt), Carlos Lopez (Benvolio), and Sascha Radetsky (Paris) were all flawless technically. MacMillan’s Romeo and Juliet allows the men to be the stars, while the women – even Juliet to some extent – have secondary roles. Gomes was a flawless technician and a convincing Romeo who had me entranced with his portrayal of the young lover and there was chemistry galore between him and Kent. The male solos and group dances were greeted with rapturous applause from the audience who were in agreement that the show was about the men.

Having said that, Kent was a stunning Juliet, with crisp footwork and clean, strong technique that allowed her to perform the role despite her maturing years. What sets Kent apart, particularly in the role of Juliet, is her incredible artistry and assured performances. During the balcony pas de deux in the first act, she was flung by Gomes like a rag doll and you couldn’t help but be swept up in the passion and excitement of the young lovers. The famous scene was fluid, beautiful, and breathtaking. The two dancers moved as one, and although they may have been acting, I believed them.

The adoration of the men by the American audience was reinforced in Act 2 and their appreciation was not misplaced. Act 3 was filled with all the drama, tragedy and redemption that the story is renowned for, without any contrived over-acting. It was truly heart-wrenching to witness Romeo and Juliet be torn apart and see them resort to death to be together. I had goose bumps, my hair stood on end, and there were definitely tears in my eyes. The spellbound audience leapt to its feet for a standing ovation and multiple curtain calls. As we poured out of the theatre and onto the street, the stifling heat no longer bothered anyone and we went our separate ways reminded that American Ballet Theatre is a polished company that delivers memorable performances.