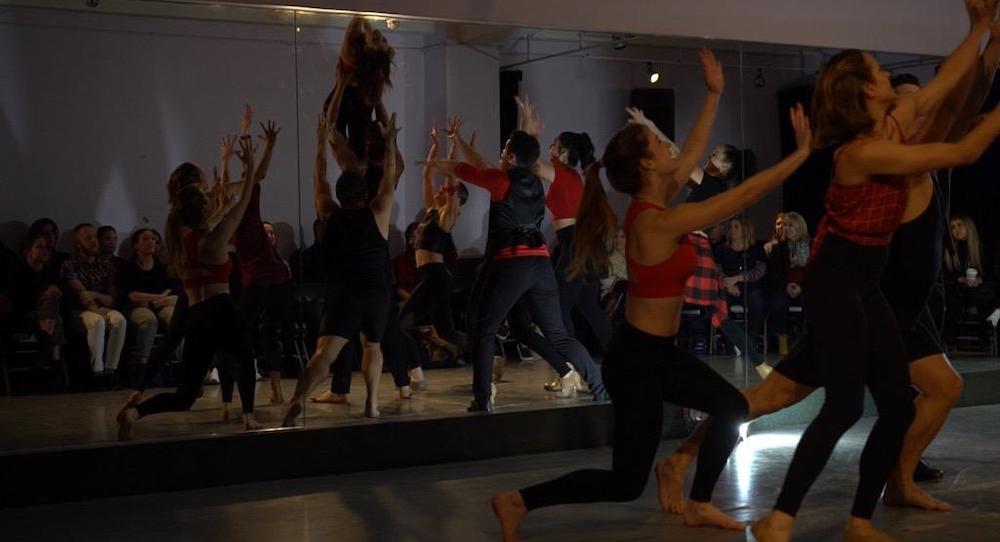 Can dance make a meaningful difference? Bettina Mahoney, artistic director of Fortitude Dance Project, sure thinks it can — and assertively acts by that belief. Amidst all of the persistent issues in today’s world, the incidence rate of cancer keeps rising. Dancers Against Cancer is a non-profit organization supporting dance artists experiencing cancer. Fortitude Dance Project’s Gala Showcase, in a large studio room at Ripley-Grier Studios, contributed all proceeds to the organization. The program featured several high-energy, technically impressive works asserting inner strength and the strength within community.

Kicking off the night was “This is Me”, choreographed by Jessica Ice. It was a work of multiple styles and a large, talented cast. Dancers entered and then paused, shifting to a new pose ever eight counts or so, as a dancer at center stage moved continuously. After turning to see her, full group movement at high energy commenced. With these shifts, I thought about strength at individual and community levels. At times, smaller tap groups took center stage as the rest of the group continued moving. Apart from the tap, the movement was in a clean jazz idiom with contemporary touches. Visually and energetically, it was all incredibly enticing.

The third work, “Throwback”, was choreographed and danced by Max Ginsburg. It was a memorable hip hop solo of striking musicality and technical command. There was a blend of accent and flow, in a play with musical beats, that was quite pleasing. Also notable was how the quality of movement and movement idiom changed at different points to exhibit various parts of the hiphop dance style. For instance, Ginsburg did impressive breakdancing moves and then shifted into a softer, more lyrical style of hip hop. He remained effectively malleable in his musicality throughout. His confident and strong stage presence spoke to being happy with who he is, and not minding too much what anyone else thinks of that person.

Following that solo was “I Won’t”, choreographed by Ryan Pauze. An aesthetically specific and clear opening grabbed me; dancers entered in a line across the back of the stage and then walked backward. All together, they turned to face the audience and moved to a formation, both their movement and the formation continuing that striking clarity and specificity. They broke out of the formation to execute intriguing movement and partnering, such as one dancer rolling over the back of another before they all moved to another formation.

I also noticed one dancer seeming to need support from the others, and them being able to offer it through taking some of her weight. This simple choreographic approach of weight-sharing spoke volumes here. The ending was also powerful, the dancers facing different directions and gazing intently in their own direction. I thought about that as a potent contrast to that giving and receiving of support, and wondered if it could have been effective used earlier in the work as well.

Coming 11th in the program was a trio also choreographed by Pauze, “Stillness”. It memorably called upon movement to text to speak to loneliness and other mental health struggles — and one moving beyond them. The dancers adeptly moved sometimes along with, sometimes in tension with, the rhythm of the spoken word. Strong leaps contrasted deep plies to offer exploration of different levels in space. Elbows and hands led clear gestures. In a wider view, movement cleverly offset two dancers to one for visual and energetic framing. To end, the dancers formed a line and gazed intensensely, in stillness, to the audience — as the score said “so move me.” This stillness was powerful. As with Pauze’s earlier piece, I wondered if using more of it earlier in the work would have added energetic and aesthetic intrigue. Yet perhaps the approach that he used was also what made the ending so memorable.

Coming 13th was Alexa Luke’s “Have Become”, a wonderfully crafted and performed, soul-stirring quartet. Facing to the back and beginning at the back wall, dancers moved closer to the audience with traveling while their legs circled to the back (ronds de jambe à terre). They then turned to face the audience in a clean diagonal line. Visually and energetically, this shift was satisfying and attention-grabbing. The work kept my attention and kept pleasing me from there. Variances in speed of movement, including the pause, made each different speed mean more to me by contrast.

The piece’s structure also had variances, including different sections (of movement quality, number of dancers moving, place in space), yet didn’t move from section to section too fast for me to become engaged with — even absorbed in — each one. Like in prior pieces, relationships of the dancers to each other spoke of giving and receiving support. Giving and receiving this support seemed to be different individuals in community, all with different strengths and vulnerabilities. Luke framed and presented all of this quite well. I look forward to seeing where she goes and what she makes next.

Following that quartet was a noteworthy duet, “Time to Go”, choreographed by Angie Conte and Xenia Mansour. Jordan Anderson and Mansour danced it. There was a compelling sense of folding and unfolding in the movement. In this movement theme came little humorous moments in the relationship between the two characters. Yet a motif of hands to front and back just above the hips spoke to attuning back into one’s strength and truest essence. Like with the work that preceded it, some of the movement was rather slow, refreshing in a program with a good amount of impressively fast movement. At the same time, there were notable accents in the movement later on in the work — to me, more striking because of that prior slow movement. Resonant tones and sounds of chirping birds brought my mind to nature. I found myself soothed at the thought.

Ending the program was Taylor Wickham’s “Unit”, a large group work with a very intentional and specific aesthetic. Dancers wore black and a large painted eyelash below one eye, referencing the teen drama, Euphoria. A repeating piano chord in the score reinforced a mysterious, somehow effectively creepy atmosphere. Movement was intense, committed, and virtuosic. Leaps flew high, accents hits hard and fast, and multiple turns spun around quickly. Formations kept it all clear, even with so many dancers in the group. The ending had one dancer going against the flow of the group, all falling yet her standing tall before the music cut out.

This development brought back that theme of the individual and the collective. Like in most pieces in this program, the work demonstrated that both have their own kind of strength. This theme (intentional or unintentional) felt apropos for a night of dance dedicated to raising funds and awareness for Dancers Against Cancer. That kind of fight for one’s own life takes both inner strength and that of a supportive community.